Cancer of Election Denialism in Some States May Kill the Country 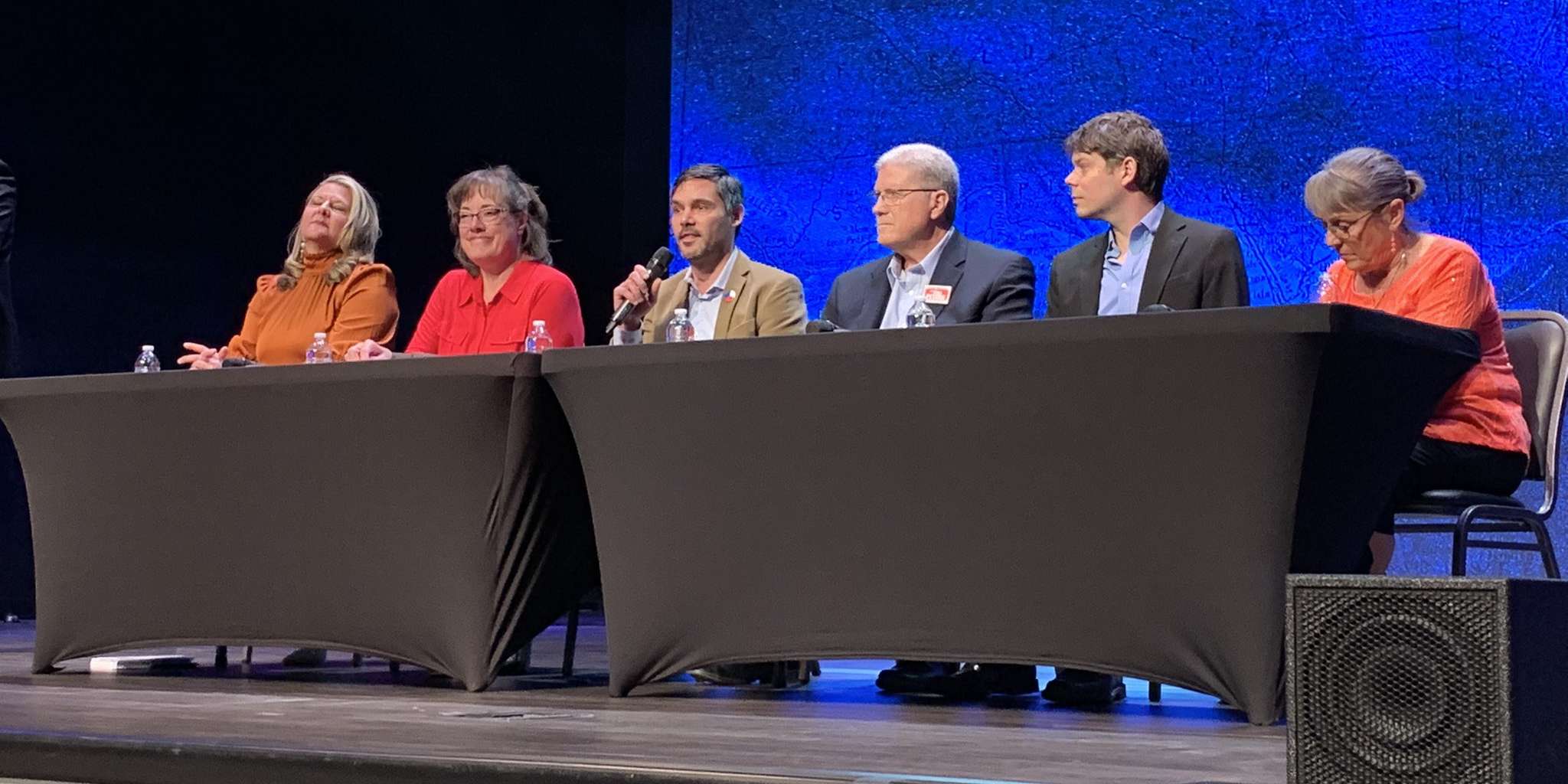 Like the races across Colorado for Secretary of State, U.S. Senate, and County Clerk and Recorder, the race for the District 1 El Paso County Commissioner seat is being dominated by conspiracy theories around Dominion voting machines. Incumbent Commissioner Holly Williams is facing a challenge from “grassroots” Republican Lindsay Moore, who unsuccessfully ran for the Academy School District 20 Board of Education last year.

Moore, part of a slate of far-right candidates running for office in El Paso County, attacked Williams in response to the first question asked, about each candidate’s main priority, at a Monday night candidate forum at The Church for All Nations in Colorado Springs.

“The number one goal for me is to put your voice back on that Board of County Commissioners and that means we’re going to cancel that Dominion contract,” said Moore to resounding applause. “We will not sit on that Commissioner Board and have a county carousel of jobs, where we have commissioners with a clear conflict of interest when her husband works for the ballot printing services and Dominion contracts, my friends. We will not do that. We will get rid of it.”

Williams corrected Moore before outlining her main focus should she win reelection. “First of all I’d like to make a clarification — my husband is a senior advisor with Runbeck, he’s never worked for Dominion,” she said. “I would correct the record on that point. My number one priority remains still the same priority I fought for for four years. We have got to get more money into our rural roads. We are also, as we urbanize, our county is growing faster than the city now and because of that growth we need to find a way to get more public safety out onto our rural roads. Those are the two areas I’m most concerned about, those are the two areas I received the most complaints about, is how are we going to get our roads fixed. We have the lowest tax rate. Our mill levy is only 7.6, but when people move into new neighborhoods they are paying for new roads and they are paying for the developments.”

Williams’s husband is at-large Colorado Springs City Councilor Wayne Williams. He’s the former El Paso County Clerk and Recorder and former Colorado Secretary of State, who is currently running for Mayor of Colorado Springs in the 2023 election. Wayne Williams was Secretary of State when Colorado negotiated its contract with Dominion in 2015. That, combined with his position with Runbeck — a company targeted by election conspiracists, including Rep. Ron Hanks (R-Cañon City) — has made Wayne Williams, and by association Holly Williams, targets of enraged “grassroots” Republicans in El Paso County who are members or supporters of far-right political activist group FEC United. The group’s founder, Joe Oltmann, helped spark the controversy over Dominion by claiming, without evidence, that Eric Coomer, a former executive with Dominion, took part in an “Antifa conference call” and claimed that the results of the 2020 Presidential election were fixed. A Denver District Court judge called Oltmann’s claims “probably false” when ruling on his anti-SLAPP motion to dismiss Coomer’s defamation suit last month.

“It has been harder as a candidate — I’m glad I have a challenger, that’s OK — it’s been harder as a candidate because I’ve had complete strangers come up to me and tell me off,” said Holly after Monday’s forum. “To me, the grassroots process is so awesome. I’ve always loved caucus. I’ve always loved county assembly, but this time the process was motivated by getting rid of Dominion machines. I had complete strangers I’ve never even met — I enjoy going to county assembly because I can shake people’s hands and get to know them. I love meeting different people, and they would just come up to me and yell at me and tell me to leave the party, I was a no-good person, and they would just turn and walk away. That really bothered me.”

Williams isn’t the only elected official to weather attacks from constituents enraged by specious conspiracy theories. Colorado Secretary of State Jena Griswold, a Democrat, has advocated for increased security for her office after weathering threats following the issuance of emergency rules to protect the security of voting machines following a breach tied to Mesa County Clerk and Recorder Tina Peters, who is currently facing seven felony charges as a result. County clerks across Colorado, Democrat and Republican, have also faced an increase in scrutiny from constituents concerned about election integrity.

“I think the questions with the election system are worth it,” said Holly. “It’s really good to ask them. I’ve had computer programmers come up to me and say it can be messed with.”

The fact that Wayne was selected by the Mesa County Board of Commissioners to handle their elections while Peters was hiding in Texas following her Aug. 2021 appearance at MyPillow CEO Mike Lindell’s Cyber Symposium is another black mark in the eyes of El Paso County’s election deniers, whom Holly refuses to dismiss out of hand.

“I know there is a huge question,” Holly said. “There’s things we can do at the state legislature I would support. I would love a voter ID [law], but let’s talk about we don’t clear our voter rolls at all. At all! That was House Bill 1303 [HB13-1303]. Let’s change it so if you don’t vote in two federal elections — two presidential elections because most people like to vote in the presidential elections — you’re removed from the rolls. Let’s do that. Let’s make it so you can only carry three ballots to the drop boxes. We have cameras on all 34 of our drop boxes, but maybe we need to upgrade technology so all of them can be streamed, live, on the internet. We can stream most of them live on the internet. That’s something the county can invest in. … I think that 2,000 Mules made some very good points, and I think that, those points, we need to work to assure the voting public.”

Moore has staked out far-right positions on other issues too. When asked how each candidate would address El Paso County’s transportation needs, Moore spoke out against taxes and government bureaucracy. “The people are tired of taxes,” she said. “The people don’t want to be taxed more for roads, because the roads they drive on aren’t being fixed. It is time to find out where our tax money is going, so we can find out where we should apply it to our crumbling infrastructure first. Secondarily, we have a lot of intergovernmental bureaucracies that are preventing a very well run system. There are systems we can put in place to make sure we have a transportation system that services the people better than we have now.”

Williams emphasized the work beginning in Black Forest and on Highway 105 in Monument.

The candidates did find common ground when asked if they would support making El Paso County a “sanctuary county for the unborn,” an effort that has been suggested, unsuccessfully, in Park and Weld Counties.

“Abortion is murder,” said Moore. “I would absolutely support El Paso County becoming a sanctuary city. There’s no constitutional amendment that says we have a right to do that [abortion]. Secondarily, that’s against God’s law and that’s against natural law. Our state legislature is an absolute abomination when they passed that bill recently, and made Colorado a home state to kill your baby whenever you so please. I am sorry, we will protect life at all costs and I will do everything in my power to protect your children.”

Williams pointed out that such a move would be legally dubious, but did offer a potential workaround. “I am pro-life and I would support becoming a sanctuary county,” she said. “We do have a couple things — roadblocks in our way. We can’t become a sanctuary county because of Colorado law and the way DHS and the county operate together. We have that opportunity. One of the ways we are going to seek to get out of collective bargaining is to become a home rule county. I would expect that if we can become a home rule county we may be able to find a way for us to be a sanctuary county. I am 100% pro-life and I do think it is very awful that we will teach our kids how to have sex, and how to be girls or boys, but we won’t teach them the most common way to prevent an unwanted pregnancy, which is abstinence.”

Challenging the winner of this month’s primary race between Williams and Moore is Democrat Ryan Lucas, who said his priority is the county’s infrastructure. “It’s important for us to start to deal with some of the underlying problems when it comes to public safety,” he said. “It’s not just putting more cops and sheriffs on the roads, it’s actually dealing with the root causes that result from poverty and crimes of opportunity.”