Gardner: ‘Most Dangerous Thing’ To Come From 2016 Election Is The ‘Normalization Of Socialism’ By Sen. Sanders

During the Pandemic, Twice-Weekly Donut Deliveries To Honor First Responders

Coloradans to Trump: “Hands off my birth control”

by
Madeleine Schmidt
posted on
November 15, 2017

At a rally today to oppose the Trump administration’s weakening of the Obama-era mandate for employers to provide birth control coverage at no cost to patients, several reproductive rights advocates explained why affordable birth control is central to the health, well-being, and empowerment of women.

Last month, the Trump administration put forward new regulations that allow employers to deny contraceptive coverage if they object based on “sincerely held religious beliefs,” or have other “moral convictions” against covering such care.

The “Hands Off My Birth Control” rally, which was organized by ProgressNow Colorado, took place outside the federal Health and Human Services building in Denver and drew dozens, several of whom dressed up as handmaids from Margaret Atwood’s dystopian novel The Handmaid’s Tale.

The rally featured several speakers from reproductive rights advocacy organizations, as well as state lawmakers, a doctor, a student, and a clergy member.

Dr. Emily Shneider, a Denver OB-GYN, said the Trump administration’s new rules will make it more difficult, or even impossible, for her patients to afford the birth control they need, and added that contraceptives are “essential and basic health care.”

Karla Gonzalez Garcia of the Colorado Organization for Latina Opportunity and Reproductive Rights (COLOR) pointed out that Latinas are twice as likely to experience an unintended pregnancy, making birth control coverage a key issue for Latinx communities.

For Alex Cardona, a student at Metro State University who works two jobs to afford her education, any unplanned expense, like a rise in birth control cost or an unintended pregnancy, would make it difficult to make ends meet.

Cardona, who is studying to be a social worker, said “affordable birth control is the difference between pursuing my ambitions and potentially having my life derailed”, and allows her to live her life “with less anxiety and fear.” 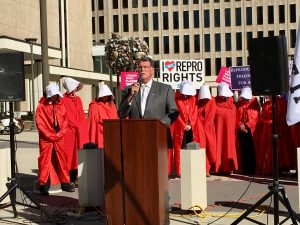 State Sen. Don Coram, a Republican from Montrose, also appeared at the rally. He’s well known across the state for crossing party lines when it comes to advocating for access to birth control, and was a key player in securing state funding for the wildly successful Long-Acting Reversible Contraception Program, which provides IUDs to low-income women and cut Colorado’s teen pregnancy rate in half.

Coram said access to birth control is crucial for ending the cycle of poverty.

Gena Ozols with NARAL Pro-Choice Colorado inspired rally-goers to action, and to remain optimistic given the outburst of activism in 2017, from the massive Women’s March in January to the sustained actions that helped thwart the GOP’s attempt to repeal the Affordable Care Act.

Ozols encouraged people to visit KeepBCFree.com, a website that calculates the yearly cost of birth control based on the contraceptive method of one’s choosing, then sends President Trump an invoice for the exact amount.