Former State Sen. George Rivera (R-Pueblo) has dropped his affiliation with the Republican Party because he is “absolutely disgusted with the current leadership” of Pueblo’s GOP. 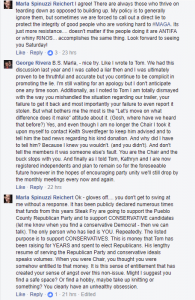 Rivera, who revealed his decision in a Facebook post obtained from a source, defeated Pueblo State Sen. Angela Giron, a Democrat, in a 2013 recall election. But he promptly lost his Senate District 3 seat to a Democrat Leroy Garcia in the next general election.

Rivera was then elected as chair of the Pueblo Republican Party, until last year when Marla Spinuzzi Reichert took over the job.

Now, he wrote on Facebook, “Kathryn and I have in fact registered as independents because we are absolutely disgusted with the current leadership who have misled the membership with your Steak Fry Fundraiser but ho have also let slip away from us a valuable asset in the form of the trailer which was donated by Keith Swerdfeger and it was me who had to look in the eye and tell him his kind donation had been auctioned off.”

Rivera did not return a call seeking confirmation and comment.

Rivera got into a heated Facebook debate with Reichert over how funds from annual steak-fry fundraiser, organized by Tom Ready for the Let’s Win Committee, would be spent. (Exchange included in this post.) 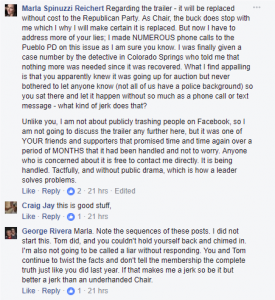 Rivera and Reichert also disputed the cause of the loss of a trailer, which donated to Republicans by Keith Swerdfeger, according to Rivera’s post. 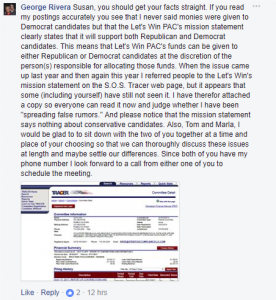