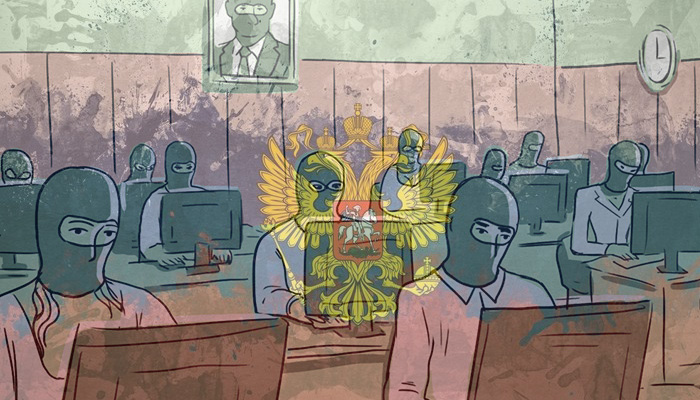 Slate has an article out detailing Russian bot attempts to sow discord in the United States by ginning up racial strife in the wake of the tragic Charlottesville rally. It’s worth the read:

The Alliance for Securing Democracy, a project of the German Marshall Fund that tracks efforts to undermine democratic governments, monitors a collection of 600 Twitter accounts that are known to be linked to Russian influence, including openly pro-Russian users, accounts that take part in Russian disinformation campaigns, and automated bot accounts that parrot Russian messaging. They found these accounts busy at work in the days after Charlottesville. “PhoenixRally,” “Antifa,” and “MAGA” were among the most common hashtags used by these accounts this week.

The Antifa hyperbole has been around for a while, but lately it has been a real obsession for many on the right. They seem to use it in a “whatabout” fashion either subconsciously or overtly in order to mitigate the damage from the close association Trump has created with racist and anti-American Nazi elements on the right.

Let me be clear: I am no fan of political violence. I denounce it categorically. I do not seek to escalate negative passions. But rather than confront the racist figures within their own party, including many we have reported on in the Colorado Times Recorder, the Colorado GOP has chosen to point at Antifa and make wild claims, exaggerating their numbers and their crimes in an effort to muddy the waters. Both sides!

Having said that, behold the paranoid thought bubble of the former Vice Chair of the Colorado Republican Party, Derrick Wilburn, who recently wrote this absolutely nuts conspiracy mongering article on the Allen B. West website: 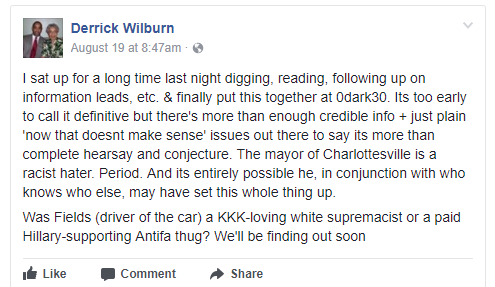 Not only is Antifa just as bad as Nazis, Antifa was pretending to be Nazis and they are the ones who committed the violence!

Joshua Hosler is a one time GOP candidate and current Vice Chair of the El Paso County GOP and does the work of ten Russian bots. He has no less than a dozen posts over the last week making increasingly hyperbolic claims about Antifa. Here is a typical example in which Joshua retweets Mike Cernovich. Cernovich is the extremist who helped push the “pizzagate” hoax which culminated in a person walking into the pizza restaurant with a gun to “investigate” and possibly free the fictional child sex slaves:

Even the cops are in on it!

Next we have Shawn Mitchell, a former Colorado state legislator. People like Mitchell are perfect marks for Russian influence campaigns. They tend to be extremely paranoid, think in apocalyptic terms, and imply constantly that mass violence is just around the corner. 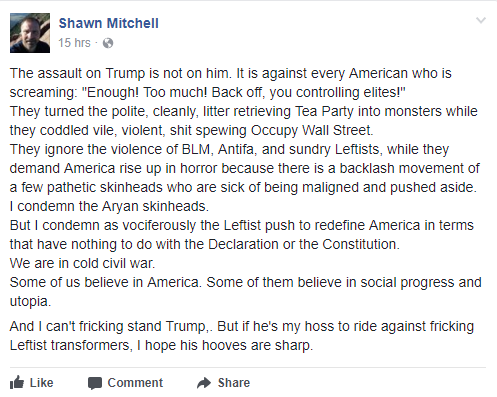 Note that Shawn describes Nazi skinheads in sympathetic terms—”sick of being maligned and pushed aside”—before feeling compelled to “condemn” them.

Finally, we come to a guy who should really know better. Sitting State Sen. Tim Neville (R-Littleton). Neville is ready to treat Antifa as “domestic terrorists”. This is pretty amazing considering that our intelligence and law enforcement agencies see the sovereign citizen movement and so-called “alt-right” (who are actually KKK, Nazis, and white supremacists) as the number one domestic terror threat in the United States and that the violence in Charlottesville was committed by an actual Nazi. 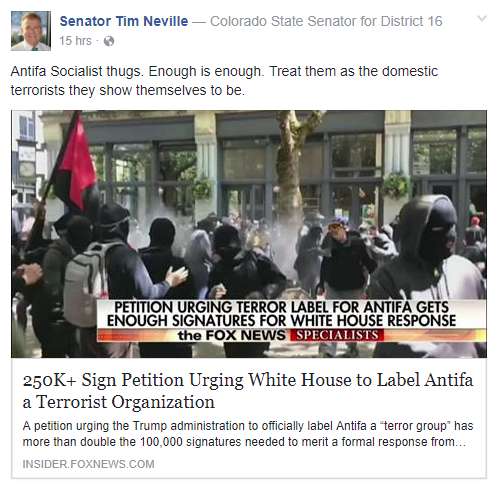 Then of course there is Confederate flag tattoo guy Justin Ratzlaff, the sitting Chair of the Otero County GOP, who thinks that if we start taking down Confederate statues then “people will be next”. I can only assume he thinks groups of Antifa are gonna start kidnapping people and “disappearing” them in the night. This is some extreme paranoia when you consider that the GOP controls all branches of government. 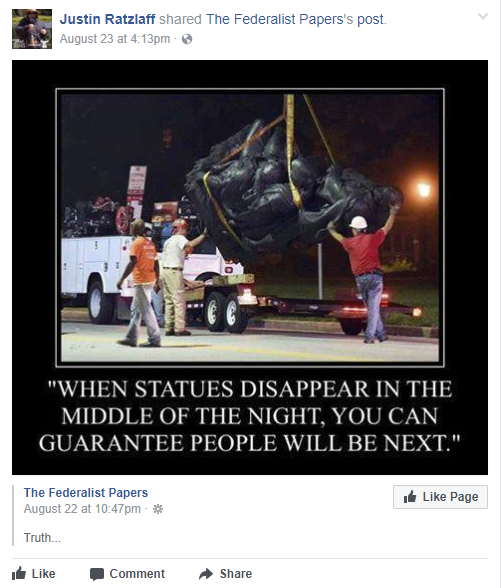 Who needs a Russian bot army when you have members of the Colorado GOP fanning the flames like these guys do? Let’s hope the violence they imply might happen is not a self-fulfilling prophecy. Whether they know it or not, they are willing pawns in Putin’s effort to sow discord and racial strife in the United States.