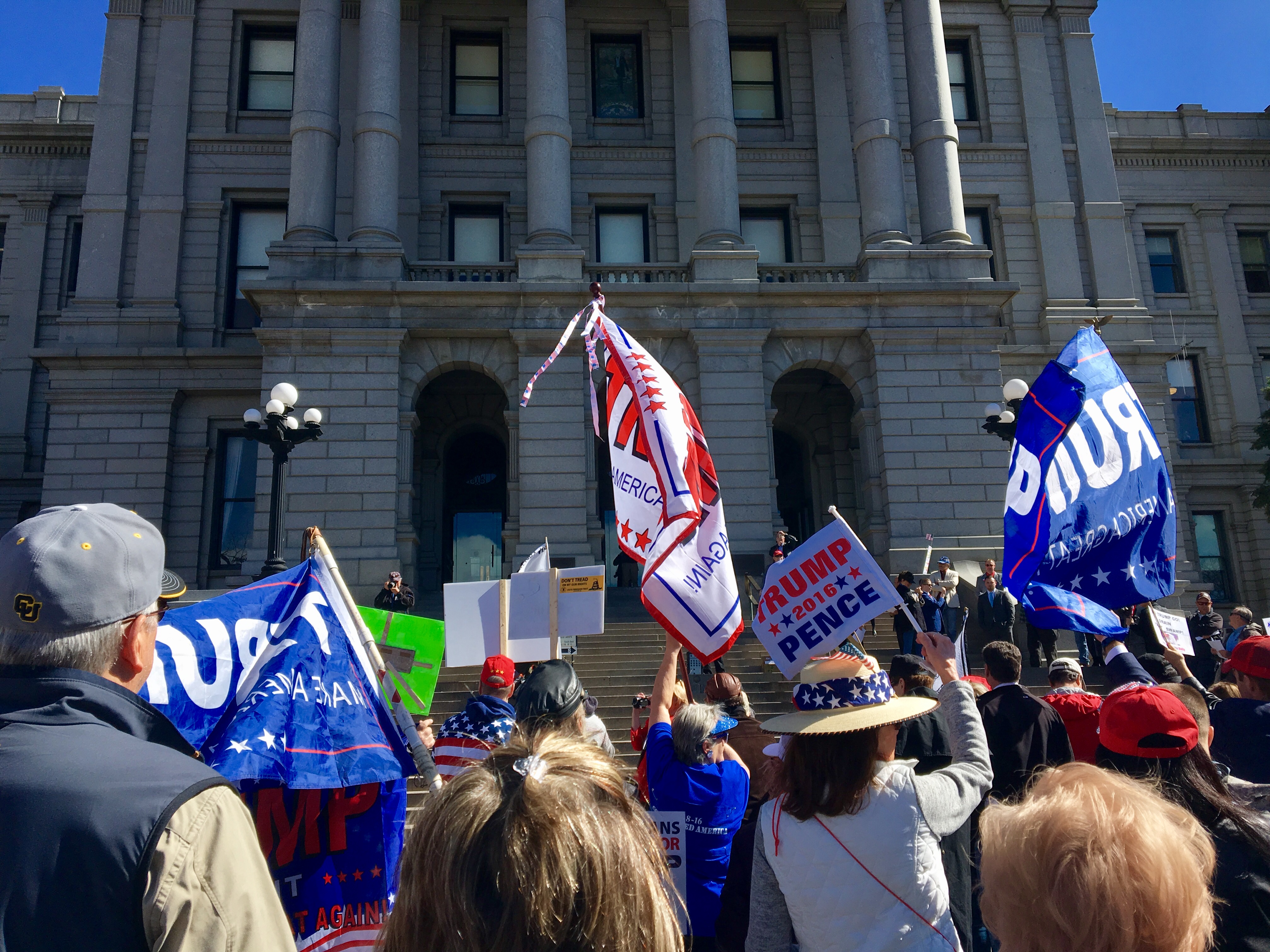 At the Spirit of America rally at Colorado’s Capitol Monday, approximately 200 demonstrators were shouting the familiar chants of “build the wall,” “lock her up,” and “drain the swamp,” and cheered as one speaker affectionately referred to them as “deplorables.”

Yes, this was a pro-Trump rally, and my editor sent me there to find out who these rally-goers were and what they were thinking.

Most people I approached didn’t want to answer questions, and some even avoided eye contact after I told them I was a reporter.

Those who actually agreed to speak with me had a diverse range of reasons for supporting Trump, but one common thread between them stuck out: an extreme distaste and lack of trust toward the news media, which they believe has been extremely unfair to the president.

“I think he’s probably spot on,” said attendee Mary Zion about Trump’s characterization of the mainstream media as fake news. “I don’t read any of them. I don’t know what to believe. Now we have to actually go to the internet, and try to decipher what’s true,” she said.

Zion said she used to get her news from Politico, but now thinks “they’re just not reliable at all.” She believes reports about connections between the Trump Administration and Russia are a ploy by the media to smear the president. “If Putin really wanted to hack our election, why would he want Trump?” she asked, adding that Hillary Clinton would be more easily manipulated.

She also said she didn’t see what the big deal was about possible connections between the president and Russia. “I mean, what would Russia want to do with America?” asked Kramer. “Can’t we be focusing on something better?”

Rally attendee Ruthie Ross said the problem with the media is that nobody knows what’s true anymore, especially when “we don’t even know if we’re male or female.” She thinks America is “losing its identity” and needs to get back on track.

One organizer, who said the media would try to underreport the turnout, announced that 350 to 400 were in attendance at the rally. I, along with other reporters, counted closer to 200.

Main Street Patriots, the group that organized Spirit of America rallies nationwide, posted this news story, which also reported roughly 200 attendees, to their Facebook page with the comment “#FakeNews reporter makes up number for crowd size!”

Of the roughly half a dozen speakers, race issues were a common talking point.

Keynote speaker Casper Stockham, who was U.S. Rep. Diana DeGette’s (D-CO) Republican challenger in November and describes himself as an “awoken Black conservative,” said his party needs to get better at marketing to counter the identity politics of the left.

Nineteen-year-old Otero County GOP chair Devin Camacho said he was tired of his heritage “being used as a political pawn by the left,” and that he was happy Trump understands Hispanic Americans have the same concerns as white Americans.

Dave Petteys, who referred to himself as a counter-jihad activist, warned that in order to attack America, Muslims simply have to “be here, make demands and consume our vast resources.”

He also claimed that the Muslim Brotherhood controls 80 percent of mosques and Islamic centers in the country. He didn’t provide any evidence for the assertion, and I couldn’t find anything to back it up, either.