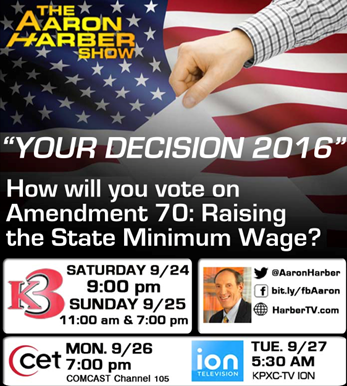 Channel 3 (KCDO-TV) will premier “Your Decision 2016” on The Aaron Harber Show this weekend in an effort to inform Colorado voters about issues surrounding the November election. The series will cover both Colorado ballot initiatives and candidate races.

The show will kick off with a two-part debate on Amendment 70, which, if passed, would gradually raise the Colorado minimum wage from $8.31 an hour to $12 by 2020.

The two guests who will argue for the passage of the measure are Debra Brown of “Business for a Fair Minimum Wage” and Judy Amabile, President and Founder of the Boulder water bottle company Polar Bottle. The show will feature Tony Gagliardi of the National Federation of Independent Business and Tyler Sandberg of “Keep Colorado Working” on the opposing side.

The special series will air on Saturdays at 9 pm and Sundays at 11 am and 7 pm until the election has concluded.

The show will also be broadcasted on ION Television (KPXC-TV) Tuesdays at 5:30 am and COMCAST Entertainment Television (CET) Mondays at 7 pm.