HOMOPHOBIA WATCH ON THE CAMPAIGN TRAIL: Conservative Talker Is Pretty Sure Polis Is Part Of “Gay Mafia” And More…

After the Paris shooting last year, former GOP Congressman Tom Tancredo posted a Facebook image with the words “Celebrating Diversity…one massacre at a time…Coming soon to a concert hall near you.”

Tancredo posted the meme below on Facebook late last night. It’s similar, with the same “Celebrating-Diversity” headline and concluding with, “Coming soon to your community.”

Listed on the image are: “Orlando. Brussles. San Bernardino. Paris.” 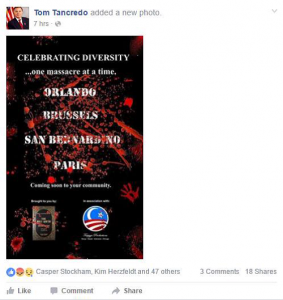