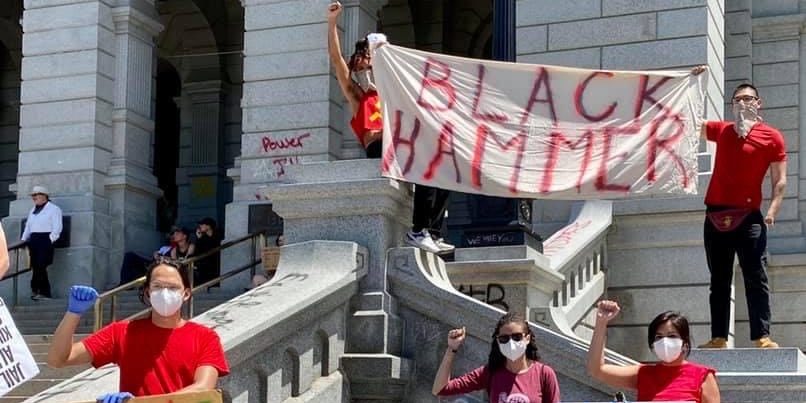 A Black separatist group with ties to Colorado has been implicated in part of a Russian influence scheme, according to a federal indictment filed last month.

The Black Hammer Party, listed as “Political Group 2,” along with the African People’s Socialist Party, “Political Group 1,” and Yes California, “Political Group 3,” allegedly received funds, starting in 2015, to spread Russian propaganda through social media, protests and speaking tours as part of influence operation run by Aleksandr Ionov, a Russian citizen and president of the Anti-Globalization Movement of Russia (AGMR). Ionov allegedly worked with the FSB, Russia’s counterintelligence agency, to “use members of U.S. political groups as foreign agents of Russia within the United States.”

The revelation that Black Hammer was part of a Russian influence operation came weeks after a standoff at the group’s “Hammer House” in Fayetteville, Georgia. Following a 911 call from a man claiming to be kidnapped, police arrested Black Hammer leader August Romaine Jr., also known as Gazi Kodzo and listed as “Unindicted Co-conspirator 5,” and Xavier “Keno” Rushin for a host of charges, such as kidnapping and aggravated sodomy. Police also found the body of an 18-year-old man, dead from what police called “an apparent self-inflicted gunshot wound to the head.”

Since its inception, Black Hammer, controlled by Romaine, has been a lightning rod for controversy. From antisemitic attacks on Anne Frank, to alliances with the far-right Proud Boys, to harrowing accounts of cult-like activity from former members, to the July 19 standoff and subsequent Department of Justice indictment, the group has garnered the attention of activists, the media, the federal government, and foreign intelligence services.

The Colorado Times Recorder spoke with former members of the Colorado chapter — who asked not to be named due to fear of retaliation — about the organization’s time in Colorado, which ended shortly after their failed attempts at establishing “Hammer City,” a proposed separatist utopia near Norwood, Colorado. The Black Hammer Party established a chapter in Colorado in early 2020, and the group became a visible part of Denver’s leftist activist scene in the wake of protests stemming from the murder of George Floyd in 2020.

According to the former members, Black Hammer initially seemed like an ideal leftist activist group for people of color, who felt marginalized in a Colorado activist community described as “very white.” One former member found Romaine’s “anti-colonial analysis” and ability to “get into the weeds on Maoism,” as well as the promise of chapter autonomy particularly appealing.

According to former members, Romaine moved to Colorado in the summer of 2020, and in addition to criticism of the African People’s Socialist Party, criticized the efforts of Black Lives Matter. Much of Black Hammer’s activities in Colorado during that summer were focused on recruitment and fundraising. Black Hammer members hold mutual aid events in Denver, providing masks, food, and water to “colonized people” while asking for donations and “reparations” from white people. Black Hammer also collected dues from members, but according to one former member the dues were optional, and on a kind of “pay what you can” model.

According to emails provided by a former member, new members were expected to provide a variety of personal information. “We also need: A photo of yourself holding up a Black Power fist and a handwritten sign that says ‘Black Hammer’ with today’s date,” read the email. “An emergency contact to put in your record for our database. I just need a name and contact info of a person we can call in case there is an emergency. Any Social Media Pages? THIS IS  MANDATORY IN ORDER TO COMPLETE YOUR MEMBERSHIP PROCESS! What are your preferred pronouns (she/ her; he/ him; they/ them)? Do you speak any other languages?”

The indictment notes, “Ionov directed [Yeshitela], UIC-2, UIC-3, [Romaine], UIC-6, and others to provide detailed information regarding the activities of [African People’s Socialist Party], [Black Hammer], [Yes California], and other groups in the United States, which Ionov compiled into reports for FSB Officer 1, FSB Officer 2, the Russian Official, and other FSB Officials.”

According to former members, the donations collected by Black Hammer were to go towards the Hammer City project. The former members whom the Colorado Times Recorder spoke to had both left the organization before the failed attempt to purchase a property in the Beaver Pines subdivision near Norwood, one citing the discovery of Romaine’s antisemitic comments, and the other a lack of transparency and Romaine’s increasingly authoritarian control of the group. According to reporting from the Colorado Sun, the group raised approximately $112,000 for the project, which fell apart after the group failed to follow through with signing closing documents. By the summer of 2021, Romaine and a portion of the Colorado chapter had relocated to Georgia.

By September, Romaine was the subject of numerous social media posts and exposés from former members, who described an oppressive, cult-like atmosphere, rife with psychedelic drug abuse and misappropriation of funds. According to reporting from the Atlanta Journal-Constitution, testimony stemming from Romaine’s July 19 arrest revealed that Black Hammer was also under federal investigation for “possible crimes involving firearms, narcotics, kidnapping and sex trafficking.”

According to the indictment, in March, Ionov paid Romaine $2,883.44 to fly from Georgia to San Francisco to protest “[Facebook’s] decision to place content restrictions on posts that supported Russia’s invasion of Ukraine and asking if [Romaine] could print the posters. … On or about March 23, 2022, [Romaine] sent Ionov an electronic message with a video depicting UIC-5 and other members of [Black Hammer] at the headquarters of a social media company in California, holding a Russian flag and posters that defendant Ionov had designed.”

The overall goal of the Russian influence operation was to support secessionist movements, like Yes California, and spread Russian messages. From the use of cult-like groups involved in drug and sex trafficking, coordinated by a front organization headed by an intelligence asset, the indictment of Ionov details the kind of intelligence operations favored historically by the CIA. Russia’s targeting of Black separatist groups, like the African People’s Socialist Party and Black Hammer, were an attempt to use the U.S.’s racism against it, but it also tragically preyed on the desires of Black activists for self-determination and liberation.

While Russia’s targets in this indictment are far-left political groups, it should be noted that Russian misinformation — aligned with the messages found in Russian propaganda — is also seen on the opposite end of the political spectrum. Recently, Douglas County podcast host and serial defamation suit defendant Joe Oltmann appeared on Russian state-controlled media outlet RT to criticize U.S. foreign policy. Oltmann’s most recent defamation suit stems from his completely inaccurate claim that an American journalist in Ukraine, Sarah Ashton-Cirillo, was responsible for the death of a Russian propagandist. Candidates Barbara Kirkmeyer and Shana Black have supported secessionist causes in-line with the aims of this Russian influence operation.

Black says her social media comments about breaking up the Union were simply hypothetical. “I’ve never proposed the dissolution of the United States of America,” she said. “I love America, I love our country, and I would never propose that. It was a conversation starter about the deep divide that I see in our country, including within the same geographical location.”

Black points to the proposed state of Jefferson, which would have combined parts of Northern California, Black’s home state, and Oregon, as an example. “Those are more rural communities, with a lot of ranchers who have completely different interests than say, San Francisco, Portland and denser population areas,” she said. “I understand their sentiment, but I don’t think that would be a successful endeavor. Are they talking about it? Yes, and I think that’s an expression of their frustrations with having urban centers with completely different values than the more rural settings. You see that in Colorado too.”

Hypothetical or not, separatist and secessionist movements will likely continue to be exploited by foreign adversaries who seek to undermine the U.S.’s position in global politics. “The prosecution of this criminal conduct is essential to protecting the American public when foreign governments seek to inject themselves into the American political process,” said U.S. Attorney Roger B. Handberg for the Middle District of Florida in a July 29 news release. “We will continue to work with our partners at the FBI to investigate these events, and we will continue to follow the evidence to ensure justice is done.”

Editor’s note: This article has been updated with comment from Shana Black about her social media posts regarding potential secession.