Colorado Chamber of Commerce Endorses Election Conspiracists for the Legislature 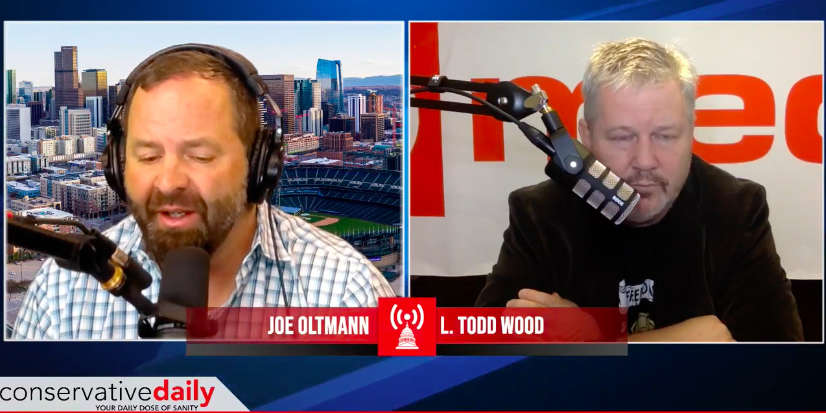 The blistering, 15-page complaint accuses Oltmann, who’s twice been an Ernst and Young Entrepreneur of the Year nominee, of defamation for claiming on the April 21 episode of his podcast, Conservative Daily, that, “[Ashton-Cirillo] is actually a secret Nazi operative; (2) [Ashton-Cirillo]’s presence in Ukraine is not as an author or columnist on assignment, but instead, to allegedly benefit her Nazi overseers; (3) that she intentionally searched out, found, and reported a ‘journalist’ named Gonzolo Lira, to purported Nazis in the Ukrainian government, for the purpose of having him killed, apparently through a beheading; and (4) that her actions, intentionally carried out, satisfied the criminal elements under American law for committing the offense of being an accessory to murder.”

During the April 21 episode of Conservative Daily, Oltmann based his claims on a post from Gab and Telegram personality Kanekoa the Great, who regularly shares COVID-19 and election conspiracy content. “The problem that I have, Todd [Wood],” said Oltmann while displaying a screenshot from Kanekoa’s Substack newsletter, “is the Daily Beast and other evil, evil, evil publications literally outed him, made a huge piece on him and decided they were going to tell everyone where he was, and worked with the Azov Battalion to find Lira, is what is being told.”

Lira was briefly detained by Ukrainian authorities and then released. As the lawsuit goes on to note, “Mr. Lira, in fact, was alive the entire time. His head was still attached. He was merely detained for a brief period of time by the Ukrainian authorities. Right now, he is posting Russian disinformation and falsehoods, while enjoying the fruits and benefits of Ukrainian citizenship.”

Oltmann, taking Kanekoa’s word for it, attacked both Ashton-Cirillo and the Daily Beast, accusing both of being accessories to Lira’s imagined murder.

Ashton-Cirillo is not the author of the Daily Beast story that Oltmann claimed “outed” Lira, nor is she cited in it. She was targeted for harassment by right-wing media figures like Oltmann for tweeting about Lira. The complaint notes, “Gonzolo Lira is not a journalist. He is a Russian sympathizer, a criminal who repeatedly violated Ukrainian law by posting vile Russian propaganda and disinformation during the conflict (and he continues to do so), and who has a long history of questionable online activities. The Daily Beast did a story on Mr. Lira, which was less than flattering.”

Oltmann has received criticism in the past for his support of Russian President Vladimir Putin following the Russian invasion of Ukraine. Oltmann has doubled down on his position despite mounting evidence of Russian war crimes.

Ashton-Cirillo’s complaint notes Oltmann’s penchant for using his podcast to spread misinformation and violent rhetoric: “The Conservative Daily podcast has become notorious as a forum where Mr. Oltmann espouses extremist viewpoints, including but not limited to (1) calling for the mass executions of Governor Jared Polis and 19 U.S. Senators who voted with Democrats to approve an 11-week stopgap spending bill; (2) falsely claiming he was the victim of a politically- motivated biological warfare attack from anthrax; (3) various QAnon conspiracy theories that Democrats are in fact cannibalistic child molesters that are part of a globalist secret society; and (4) an extravaganza of debunked claims that the 2020 Presidential Election was stolen by Antifa, Dominion Voting Systems, and Joseph R. Biden, the current President of the United States.”

Oltmann is currently the defendant in a defamation suit filed by former Dominion Voting Systems executive Eric Coomer, whom Oltmann accused of being part of an “Antifa conference call.” After Oltmann named Coomer on Conservative Daily and a number of other outlets hosted by right-wing media figures like Michelle Malkin and Eric Metaxas, Coomer experienced waves of harassment and death threats.

Ashton-Cirillo claims she had the same experience. “The backlash resulting from Mr. Oltmann’s podcast was immediate and severe,” notes the complaint. “Sarah began receiving several hundred messages, both directly and in reply to her online postings, containing the most vile, hateful, and disgusting invective humanly possible—threats of death, kidnapping, mutilation, and name-calling.”

Oltmann, who regularly slanders members of the LGBTQ community on Conservative Daily, calling them “groomers” and “pedophiles,” similarly attacked Ashton-Cirillo, who is transgender. “Oltmann expressly identified Sarah during his podcast, called her an array of transphobic slurs such [as] ‘she-man’ who is a ‘piece of trash,’” reads the complaint. “Yet again, Mr. Oltmann turned the salutary goals of the First Amendment on their ear, and used it instead as a vehicle to weaponize Russian disinformation, transphobic hatred, and extremism on a worldwide scale.”

The complaint goes on to provide insight into Oltmann’s extensive legal history in Colorado, noting, “He has been involved in 40+ lawsuits in Colorado alone since the year 2000, a rate of two per year,” and “In just the 21st century alone, Mr. Oltmann has found himself embroiled in 52 separate criminal and civil cases as party. These include numerous debt-collection proceedings, two completed foreclosures, lawsuits alleging that his former auto dealership had stolen money from consumers and had his dealer’s license revoked, and various and sundry other disputes.”

Ashton-Cirillo’s complaint also alleges that Oltmann’s outlandish conduct on Conservative Daily is a money-making strategy. “Oltmann’s only personal truth is greed,” reads the complaint. “Pure and simple. A greed that is fed by an ever-devolving arms race of extremism, lies, defamation, and threats. The faster he races to the bottom, the more money he makes, and the further he distances himself from a long string of business failures, multiple foreclosures, and dozens of lawsuits.”

A footnote in the filing adds, “Mr. Oltmann, as a benefit of his extremism, has gone from being a twice-foreclosed courthouse regular to enjoying the luxuries of a palatial 1.5+ million-dollar estate in Castle Rock, Colorado.”

Oltmann has vigorously denied a financial motivation for his attacks against Coomer and his regular presence on Conservative Daily, a podcast which is sponsored by entities such as MyPillow, AirMedCare Network, Liberty Cigars, and Colorado Springs evangelical firebrand Gordon Klingenschmitt.

In addition to the podcast, Oltmann is a serial entrepreneur, with an extensive list of business interests, such as DCF Guns in Castle Rock. After he began making false claims about the 2020 election, Oltmann was forced to step down from the data marketing company he founded, PIN Business Networks, which counts among its clients the Douglas County Republican Party. Since leaving the company, PIN has continued to receive business from political activity tied to Oltmann. In November 2021, PIN made $86,100 dollars from Colorado school board candidates, including FEC United board member and current El Paso County Coroner candidate Rae Ann Weber. Recent Federal Election Commission filings show that Ron Watkins, the QAnon figure and U.S. Congressional candidate in Arizona, paid PIN $5,530 for “email blasts.”

Another Oltmann business, Shuffling Madness Media, received a Paycheck Protection Program (PPP) loan for between $350,000 to $1,000,000, according to PPP loan data released by the Small Business Administration and Department of the Treasury. Oltmann, who regularly livestreams himself behind the wheel of a 2020 Corvette, has described Shuffling Madness as “an incubator for new businesses” in his deposition for the Coomer case. During that deposition, Oltmann declined to say exactly how many employees SMM actually has, but did claim that it didn’t share any employees with Conservative Daily.

In October, 2020, Oltmann bragged about his wealth while threatening journalists. “They’ll run out of money before I do,” Oltmann said at an FEC United event at Bandimere Speedway. To date, Oltmann has not filed any lawsuits against Colorado journalists, and is currently soliciting donations to his Give Send Go, citing financial difficulties from the Coomer defamation suit.

Those financial difficulties haven’t stopped Oltmann from taking frequent trips, sometimes as part of events like fellow Coomer defamation defendant Clay Clark’s “ReAwaken America Tour.” Oltmann recently announced a fishing and bear hunting trip he was taking in Alaska, which prompted former Conservative Daily cohost Max McGuire to make a Telegram post presumably directed at Oltmann. “Imagine (purely hypothetical) that some conservative ‘influencer’ begs you to donate to their legal defense because the legal bills are burying them and they keep getting sanctioned and forced to pay Eric Coomer’s legal bills,” wrote McGuire. “Being a generous person you donate to help out. But when you turn around you see that they are jetting off to some exotic location (for this hypothetical, let’s say they’re going to Alaska on vacation to hunt bears). Like the parent discovering a new TV in their strapped-for-cash child’s apartment, you have every right to be pissed. No, your donation didn’t directly pay for the vacation. However, since money is fungible, your donation frees up their money so they can afford to go on an expensive vacation.”

In response to an emailed request for comment regarding the allegations in Ashton-Cirillo’s lawsuit, Shuffling Madness Media’s PPP loan, and allegations in the Haldiman lawsuit, Oltmann responded, “Go fuck yourself… Good enough?”