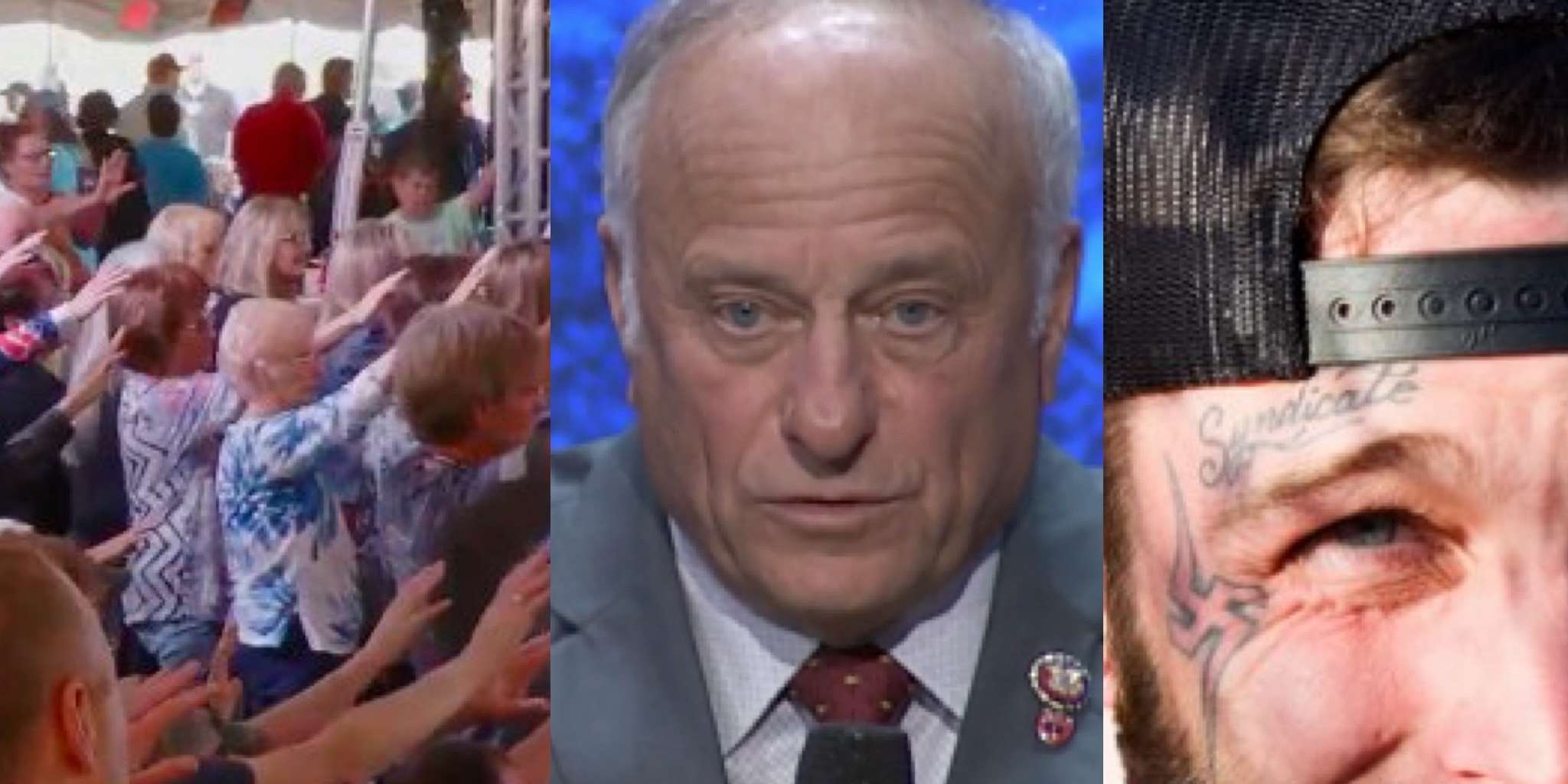 This summer, evangelical churches in Colorado Springs have hosted a number of far-right speakers such as Mario Murillo, Sean Feucht, and former U.S. Representative Steve King.

Today, Murillo, the MAGA pastor who drew media attention for calling Big Bird “demonic,” finishes a four-day tent revival at Radiant Church in Colorado Springs. Teams of Murillo volunteers have been canvassing Colorado Springs since Sunday, handing out postcards and extending invitations to Murillo’s services in a 19,000-square-foot tent set up at Radiant Church’s North Campus.

Murillo’s sermons during his tent revivals, couched in the Gospel of Jesus, touch on common grievances for right-wing audiences, such as liberal control of the media. “You know my competitors have billions of dollars,” he said during a prayer to God at yesterday’s service. “They own the airwaves. They own the universities. They laugh and they smirk and they live with absolute disdain for you, but tonight the Holy Spirit will follow this crowd.”

Murillo also stoked fears over the globalist agenda.  “We live under the tyranny of an elite, small group of people, with all the money and all the power that want to control how you think, what you feel, where you live, when you can go to church, what you can say and what you cannot say,” he said. Though his sermon didn’t go so far as to name individuals or organizations, fears about the World Economic Forum and it’s “great reset” are common talking points in right-wing media and QAnon circles, as are concerns about the influence of billionaire George Soros, who is often the subject of antisemitic conspiracy theories.

Not only does Murillo offer politically-tinged sermons, but he accompanies them with “signs and wonders” such as faith healing and speaking in tongues. The Mario Murillo Ministries blog described the July 11 event, “Then a woman came toward the front. She was being miraculously healed of a multitude of conditions. [Murillo] told her he had been waiting for her, and that God had shown him her face as he was on the way to the tent, and that the Lord had also revealed her story to him. God healed her lungs, dizziness, weakness, a growth in her abdomen, heart, neck, back, hips, knees, feet and hands. Mario had her raise her legs and wave her arms. He kept instructing her to move in different ways. She finally began to dance, and the crowd erupted with joy and applause for the miracle God had performed.”

Murillo credits God not just for miraculous healing, but for being directed to Colorado Springs. “The one thing that God said to me tonight, he said, ‘Get in that pulpit and destroy the witchcraft in Colorado Springs,’” he said.

While Colorado Springs, which is home to numerous evangelical organizations such as Focus on the Family, the Navigators, and others, might seem an odd place to find witchcraft, it is a lucrative location for a traveling tent revival. According to Murillo’s livestreams on Facebook, he collected $5,086 Sunday night, and $3,207 on Tuesday. Those are just the donations made via the social media network, not the donations from in-person attendees.

Radiant Church’s pastor, Todd Hudnall, whose son’s broken leg was also “healed” during Murillo’s event, attended the Hold the Line event at The Road Church in May, which featured controversial evangelical musician Sean Feucht and Eric Metaxas, an evangelical author and podcaster known for punching a protester and platforming Douglas County election conspiracist Joe Oltmann, with whom Metaxas is a co-defendant in a defamation lawsuit brought by former Dominion executive Eric Coomer. In addition to Feucht and Metaxas, U.S. Representatives Doug Lamborn (R-CO) and Lauren Boebert (R-CO) spoke at the event, alongside El Paso County elected officials.

Radiant Church, The Road Church, and Church For All Nations are a trifecta of nondenominational evangelical Christian churches in Colorado Springs that are mixing political figures and commentary with firebrand preaching and old time religion. During the Hold the Line event, Lamborn recognized The Road Church’s pastor Steve Holt for his commitment to Christian dominionism.

“We appreciate the fact that Steve [Holt] wants all of the seven mountains of society to be taken over for the Lord,” said Lamborn.

The “Seven Mountain Mandate” is a concept in evangelical Christianity which suggests that Christians should take over the seven mountains of cultural influence: family, religion, education, media, entertainment, business and government.

In May, Church For All Nations hosted the former U.S. Representative from Iowa, Steve King, in a panel discussion that included Neal Schuerer, a former Iowa Representative who now lives in Colorado Springs, and America’s Mom herself, Sherronna Bishop. King is best known for his controversial comments that have echoed white supremacist rhetoric and even included support for rape and incest.

During the Church For All Nations event, King reflected on his work to pass Iowa’s Defense of Marriage Act, which banned same-sex marriage but was overturned by the Iowa Supreme Court in 2009, and his support for anti-abortion activism and Phyllis Schlafly, in particular.

King admitted that due to his history of racist remarks he was the ​​”most toxified person in the political arena.” King was concerned an endorsement from him “might just kill off their campaign.”

In addition to large churches drawing national figures like Feucht, King, and Murillo, activists warn of the growing collusion between far-right extremists and Christian groups. Last week, the Colorado Springs Anti-Fascists drew attention to the Jesus Church in Colorado Springs, whose outreach leader, Cody Greathouse, was a known neo-Nazi in Indiana. While it is unknown if Greathouse is currently active in white supremacist activities, his photo on the Jesus Church’s website shows off his numerous facial swastika tattoos. The Jesus Church did not respond to an emailed request for comment.