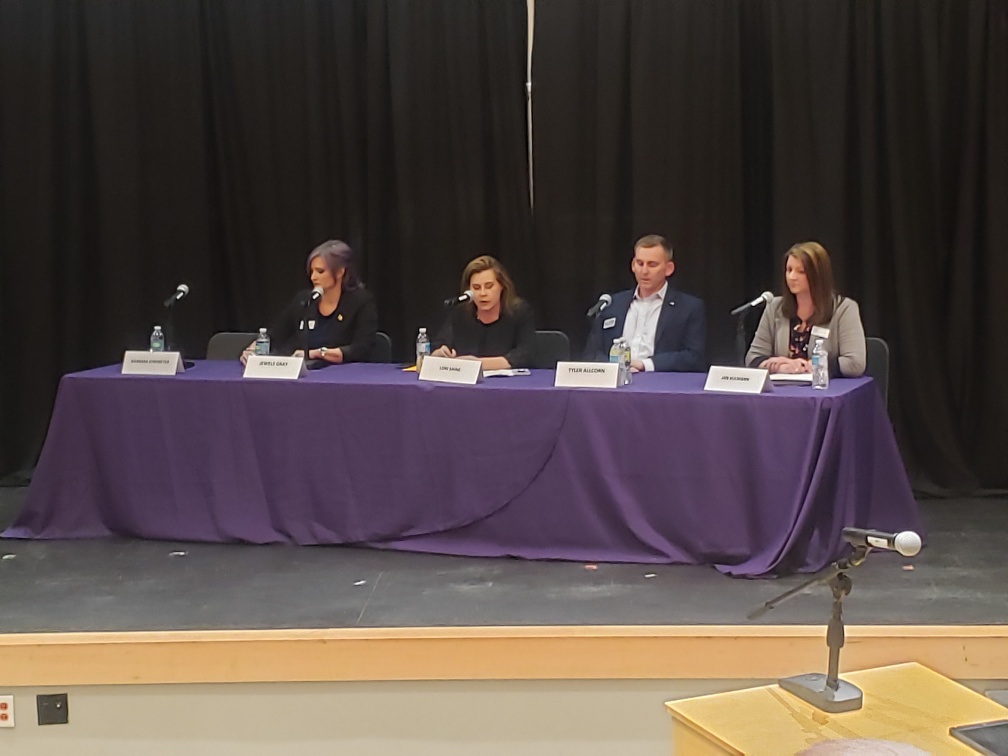 UPDATED: This article initially stated that three Republican candidates running against congressional candidate Lori Saine joined other Republicans in deciding to exclude Saine from a GOP debate tomorrow after Saine failed to respond to emails inviting her to attend, according to the Republican Women of Weld (RWW), the organization sponsoring Saturday’s debate — billed as the Colorado Republican Rumble — at the Grizzly Rose in North Denver.

In fact, according to an RWW spokeswoman, “The Republican Women of Weld officers took the vote & it was unanimous. The other candidates were not part of the meeting or vote.”

The confusion stemmed from an email posted on the RWW Facebook page.

The unanimous vote was taken by RWW officers, not the CD8 candidates.

The email on the RWW Facebook page states there was an April 5 deadline to confirm participation in the event, and all other candidates responded in time.

Saine claims she never saw the invitation emails from the Republican Women of Weld.

Judging from the email, it appears that event organizers didn’t try to reach Saine by phone, possibly due to previous frustrations they claim to have experienced in attempting to reach her by phone for a March event.

On the Chuck and Julie Show on May 19, Saine said she almost “fell off her chair” when she heard that she wouldn’t be allowed to participate in the debate.

“I received an email saying that the other three CD8 candidates voted to not let me debate them on Saturday. That’s not a good look,” Saine told hosts Chuck Bonniwell and Julie Hayden. “That’s the real story. That’s an email I received yesterday, and I almost fell out of my chair. I’m like, ‘You sent this to a congressional campaign.’

“I’m concerned about the look of this,” said Saine on the podcast. “Candidates being allowed to vote someone off the island.”

“I actually got conflicting information about when this event was,” continued Saine. “I still hadn’t heard anything two weeks out, so my comms director here in Weld reached out to them and heard nothing. And so I was just being very insistent on getting information about the debate. I don’t think we were impolite. We just asked for the information and usually, you get something two weeks out or at least a week out saying, ‘Here’s the rules for the debate. Here’s how much time you get to speak. Here’s when you should be there.’ All of the other debates and forums I’ve been to, I’ve at least received something like that.”

On the podcast, Hayden suggested that the debate moderators, including KNUS host George Brauchler, should tell the crowd at the debate that Saine was excluded.

“Say, ‘Lori Saine, the frontrunner, isn’t here because these other candidates who you see sitting here on the stage about to debate voted to not let her be here because they are afraid of her,” said Hayden.

But at least one of the debate moderators, Republican Kelly Maher, is siding with the Republican Women of Weld’s decision to exclude Saine, launching into a vehement Twitter attack on Saine, culminating with an announcement that she, Maher, was withdrawing as a moderator because she’s no longer “objective.”

“I just asked to be pulled off this part of the program because this disingenuous bullshit is so infuriating I am no longer an objective moderator,” tweeted Maher. “If someone can’t respond to an invite with A MONTH’S NOTICE they should take responsibility.”

About the same time that Maher was tweetstorming, Thornton Mayor Jan Kulmann, one of Saine’s three opponents, tweeted that she actually wants Saine included in the debate.

On Twitter, Kulmann’s spokesperson stated Sen. Barbara Kirkmeyer, another candidate in Saine’s congressional race, agreed with RWW that Saine should not be allowed to debate. It’s not known what position was taken by Saine’s third opponent, former Green Beret Tyler Allcorn.

Kulmann tweeted she wanted Saine in the debate and had “told debate organizers as much.“

Maher called Kulmann’s tweet “gross” and a “desperate pivot.” She went on to call it “sad” and “pathetic.”

In her tweet, Kulmann attacked Kirkmeyer, implying that Kirkmeyer was behind the move to ice out Saine.

“Barb’s entire campaign has been cashing in 30 years of political favors. This is one more example,” said Kulmann in her tweet.

At least yesterday, Saine remained level-headed about the dispute.

“We have an enemy out there both spiritually and physically in the Democratic Party,” Saine said on the Chuck and Julie Show. “And we probably should be focusing on that, rather than fighting each other.”

She said she’ll probably be canvassing voters on Saturday.

The winner of the June 28 GOP primary will take on Democrat Yadira Caraveo to represent the district, which is situated in suburbs north of Denver, and it’s expected to be among the most competitive congressional races in the country in November. An eighth congressional district was assigned to Colorado after the 2020 Census.