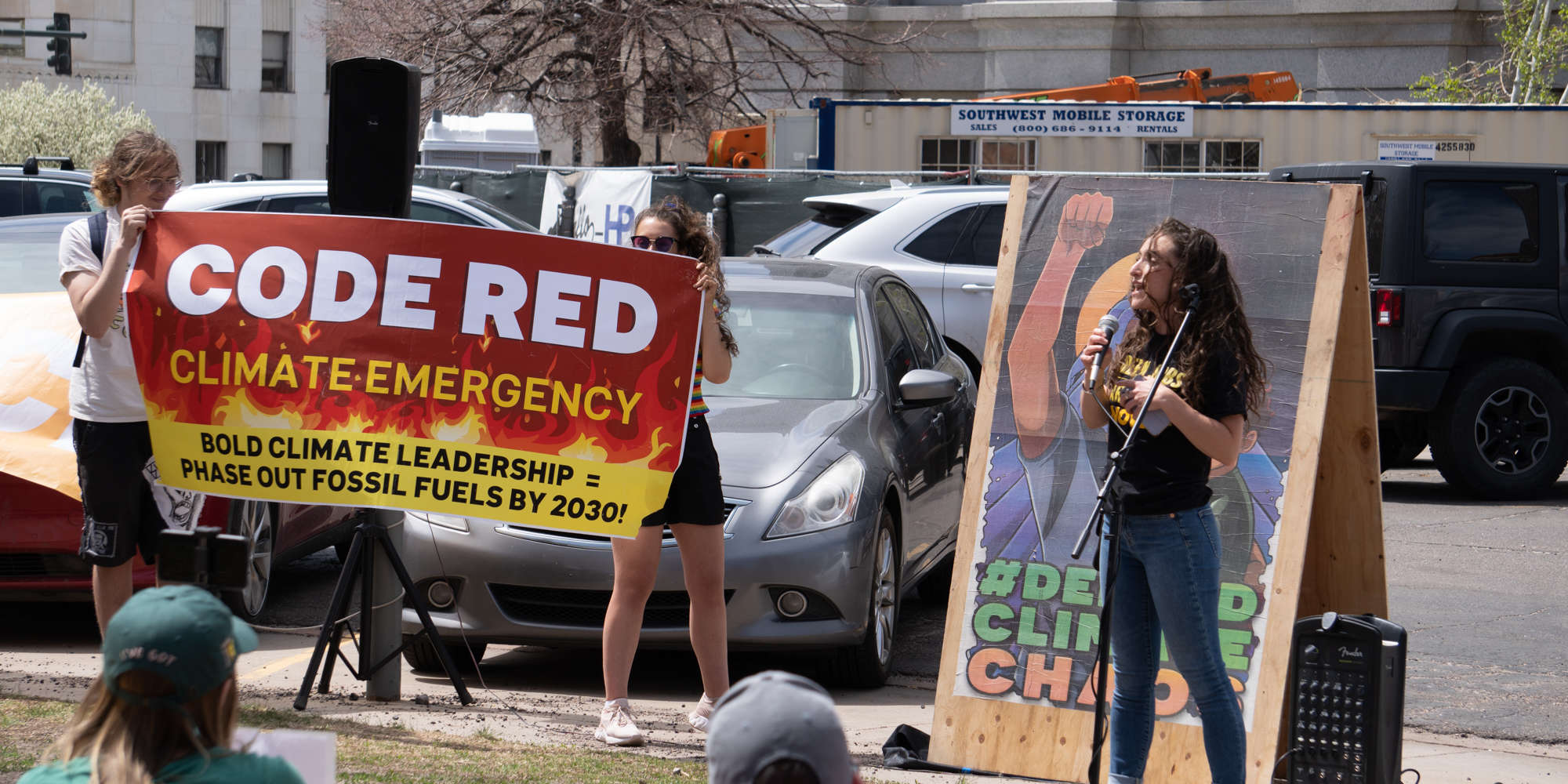 This Earth Day, with much of Colorado under critical wildfire watch due to high winds and high heat, a coalition of 60 environmental groups marched just over a mile through Downtown Denver today to demand climate action from elected officials.

A rally preceding the march was held on the east side of Colorado’s Capitol building and featured speakers who had been affected personally by climate change-exacerbated wildfires.

One of the speakers was Susan Nedell, a Mountain West Advocate with Environmental Entrepreneurs, a national group of business leaders advocating for a cleaner environment. Nedell lost her home to the Marshall Fire in December.

“We cannot let another Earth Day go by without instituting major shifts to a clean energy economy,” Nedell said at the rally. “The devastating Marshall Fire, costing the community over $513 million is a stern reminder that the cost of inaction for our lives and pocketbooks, is far greater than the cost to prevent a further climate crisis.”

The groups delivered a petition to Gov. Jared Polis (D-CO), the Colorado Oil and Gas Conservation Commission, and Colorado’s Department of Public Health and Environment calling for a declaration of a climate emergency. The petition — signed by thousands of Coloradans — also demanded Polis work with state organizations to phase out fossil fuel production by 2030 and decarbonize the state’s building, transportation, and manufacturing sectors.

The petition can be read here.

In February, the United Nations’ Intergovernmental Panel on Climate Change released its latest report on the impacts climate change will have on humankind. Its conclusion was bleak.

“I have seen many scientific reports in my time, but nothing like this,” said U.N. Secretary-General Antònio Guterres while introducing the report. “Today’s IPCC report is an atlas of human suffering and a damning indictment of failed climate leadership.”

Hannah Recht, representing the Colorado Thrives Coalition, a group that works on fighting the climate crisis in a way that centers racial and economic justice, communities of color, and worker’s rights, also spoke at the rally urging for radical change in how Colorado combats the climate crisis.

“We know that the oppressive systems that got us into this mess are not the same ones that are gonna get us out,” Recht said.

Recht called out elected officials in Colorado and at the federal level for their lack of action relating to climate issues. In August 2021 Colorado environmental groups delivered postcards to U.S. Sen. John Hickenlooper’s office asking for Congressional action on climate change.

“Eight months ago we went together and visited Senator Hickenlooper’s office with letters signed by 700 Coloradans,” Recht said at today’s rally. “We called on him and our entire Congressional delegation to champion federal action on climate, care, jobs, and justice. They promised they were working on it. They promised it was a priority and here we are heading into an extended wildfire season with no action.”

Here are the National Environmental Scorecard results from each member of Colorado’s Congressional delegation, according to the League of Conservation Voters:

While Joe Biden has reversed some Trump-era policies that relaxed environmental regulations, some environmental advocacy groups have been critical of the President’s record on climate change issues.

“We joined with thousands of people across the country this weekend to demand that President Biden, Congress, local elected officials, and Governor Polis take action to address the climate crisis at scale, invest in essential care workers, create union protected dignified jobs, and prioritize investments in the communities most impacted,” Recht said.

After the rally, a group of about 100 people marched from the Capitol to the Federal Reserve Building along 16th Street Mall in order to call for an end to fossil fuel financing.

“Scientists across the world have sent a clear message: we only have a short window of time to significantly cut down greenhouse gas emissions and keep global warming below 1.5°celsius,” Herzfeld said. “In spite of this, Wall Street banks have continued to pump hundreds of billions of dollars into the fossil fuel industry, under the guidance of the U.S. Federal Reserve. This is why, on Earth Day, we are calling on the Federal Reserve to stop funding the climate crisis, and start funding a Green New Deal.”

Wall Street banks have invested hundreds of billions of dollars into oil, gas, and coal companies, and are sticking by their investments in spite of the growing climate crisis.

“No more coal, no more oil, keep that carbon in the soil,” the group chanted as they marched.

Scientists have come to a consensus that humans need to curb global emissions by 2030, emphasizing the importance of keeping global warming below 1.5° Celsius.

Here is what some of the signs at the march read:

Here is the list of sponsoring organizations for the Earth Day march and rally: