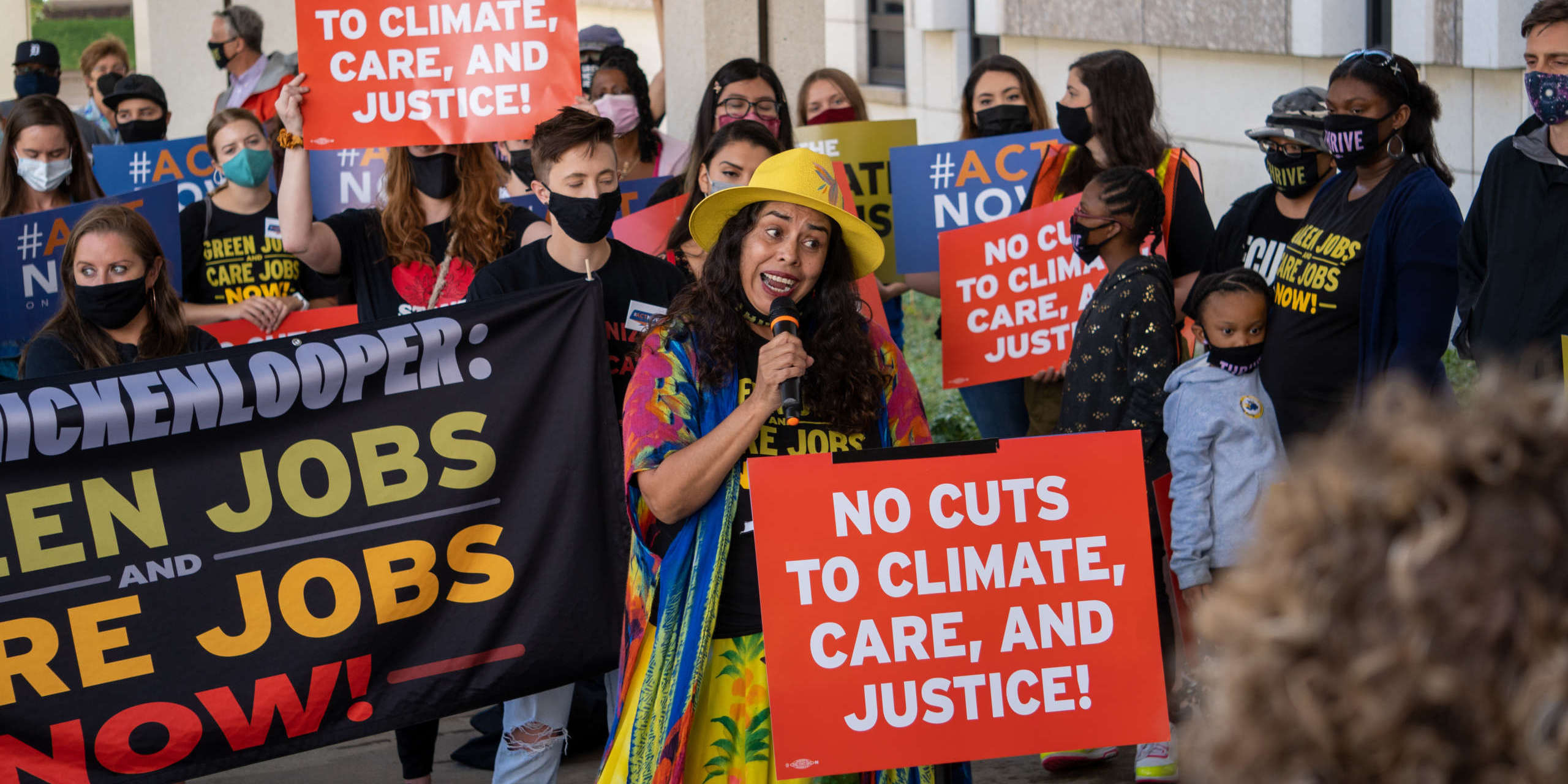 The extreme weather dissipated right as the event began, allowing speakers from the Colorado Thrives Coalition, a group of nonprofit environmental organizations, to make an impassioned plea for U.S. Senate budgetary action on climate change.

Click here to watch a recording of the event.

During the rally, Phoebe Dominguez, a 13-year-old climate activist from 350 Colorado, an anti-fossil fuels group, pointed out the connection between the rise in extreme weather events and climate change.

“Right now, Colorado is facing out of control wildfires, floods, unbreathable air quality, scorching heat waves, and extreme weather like we witnessed today,” Dominguez told the crowd. “This is just the beginning. If we don’t act now, if our government doesn’t act now, this will be my future, your future, and your children’s future.”

Soon after the event started, the sun broke through the clouds, illuminating the crowd of about 100 people. Some carried signs that read, “No cuts to climate, care, and justice,” or, “Hickenlooper: green jobs and care jobs now!”

A few of the members of the crowd went inside Hickenlooper’s office to deliver 650 postcards from community members asking for congressional action on climate change.

The Colorado Thrives Coalition is hoping that Congress tackles climate change in a way that centers people, focusing on green jobs, clean air and water, and infrastructure like energy-efficient homes.

Marcos Garibay, a teacher and member of Colorado People’s Alliance, a racial justice organization, explained that he has experienced the effects of climate change and pollution first-hand and that he hopes Hickenlooper will support the movement’s goals.

“How much longer should our community suffer while corporations profit?” Garibay told the crowd. “How many wildfires, water struggles, or record-breaking heatwaves does it take for Congress to take action? How bad must things get in our community for our senators to reconsider their loyalty to the donors in the fossil fuel industry?”

In the coming weeks, U.S. Senate Democrats will debate a sweeping economic package that currently costs $3.5 trillion, which includes funding for renewable energy, the care economy, public transit, public buildings, and a Civilian Climate Corps. Even though the budget package can circumvent the GOP filibuster threat, it is still expected to meet resistance from moderate Democrats.

That means more progressive climate and immigration provisions included in the budget might not survive the negotiations.

In July, Colorado immigrant groups asked Congress to include a pathway to citizenship in its budget resolution. Last week, Hickenlooper pledged his support to fight for immigrant rights during negotiations.

On Thursday, the rally organizers hoped he would do the same for climate action.

“Today we ask Senator Hickenlooper to be an advocate for Coloradans, for my family, for my students, and for my community,” said Garibay, the crowd cheering in agreement. “Senator Hickenlooper, hold the line and ensure that we have a budget reconciliation that has $3.5 trillion, not a penny less, for climate, care jobs, and justice.”

Members of Hickenlooper’s office met with the organizers of the event and while they did say that the senator is taking climate change seriously, they did not make a definitive promise that there would be no cuts to climate action during the budget negotiation. Hickenlooper’s office did agree to a future meeting with the Colorado Thrives Coalition.

A spokesperson for Hickenlooper provided a statement explaining that the senator is pushing to make sure climate action is included in the final budget resolution.

“In addition to helping write the bipartisan infrastructure bill that invests billions in clean energy, Senator Hickenlooper voted to advance the budget resolution and believes a second bill is necessary to make our economy more equitable and just,” the spokesperson said. “Congress is writing that bill over the next several weeks, and Senator Hickenlooper is pushing to make sure it goes big on climate while creating millions of good-paying jobs.”

The bipartisan infrastructure bill passed earlier this month does include climate provisions. In an op-ed for the Denver Post, he explains that he plans to fight for the inclusion of methods to curb greenhouse gas emissions and create jobs in the upcoming budget resolution.

Earlier on Thursday, Hickenlooper announced he had been diagnosed with a breakthrough case of COVID-19. His office said that Hickenlooper had been vaccinated, experienced mild symptoms, and is now feeling much better.

Aracely Navarro was a speaker at the rally and afterward expressed frustration with Hickenlooper’s lack of a clear commitment to fight for all the climate provisions included in the budget resolution. Navarro is part of Cultivando, a Latinx nonprofit group, and is aiming to bring awareness and change to the poor air quality in Commerce City.

“Personally, I really feel like our leaders need to be strong for us,” Navarro told the Colorado Times Recorder. “They need to hold the line for us. They really need to hear us. It’s really disappointing that he won’t really make that commitment, but honestly, as a woman of color, I don’t expect anything less. A lot of times we’ve had to work and fight for ourselves through our history so that just tells me that our community needs to keep fighting.”

Navarro paused to listen to the sound of the crowd chanting behind her, “Hey hey! Ho ho! Fossil fuels have got to go!” Sounds of whistling, clapping, and musical instruments filled the smoky air.

“It’s a bittersweet thing,” Navarro said. “It’s sad that we have to do this. But, it gives me hope that our communities are coming together taking the fight into our own hands.”

Brandy Harrison is a Denver Public Schools bus driver and member of 9to5 Colorado, a labor organization focusing on women’s rights. Harrison spoke at the rally to explain the need for care jobs and green infrastructure like electric buses. DPS has one electric school bus.

After the rally concluded, Harrison seemed optimistic that Hickenlooper would support the climate provisions in the budget. When asked how it felt to be standing outside the Senator’s office, Harrison took a moment before answering.

“It feels empowering. It feels exciting,” Harrison told the Colorado Times Recorder. “I feel ready. I feel ready to put on a fight and ready for him to fight with us and to help us. And when he helps us reach our goals he helps everyone.”

Harrison also said that while she was blown away by the turnout at the rally, she is expecting greater numbers at future events. Events like these, according to Harrison, are an example of what can happen when people come together for a common cause.

“I love it,” Harrison said. “It really feels like community”

Correction: Language in this story was updated to better reflect that this event was a rally, not a protest.