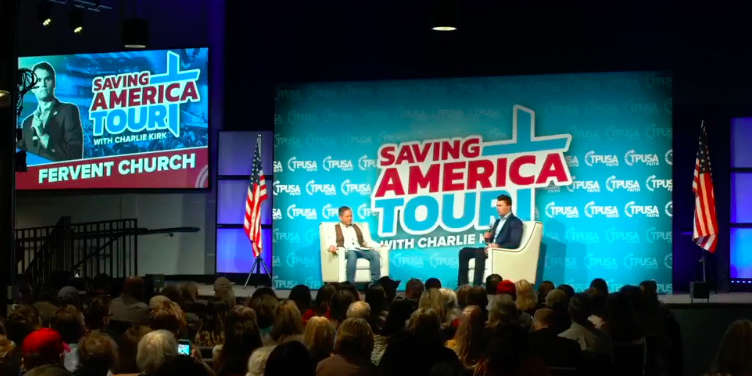 “The churches are finally starting to stand up in El Paso County, and we’re seeing some really good results,” said Graupner, who also announced the formation of a TPUSA Faith chapter in Colorado Springs. “We’re done with people calling themselves conservative and … they’re not really conservatives. I think there’s a hill for us to die on as Christians. Yes, I’m against gun control. Yes, I’m against sanctuary cities. Yes, I’m against open borders, but there’s three that I stand on, that I will fight to the death for. That is the unborn, and you know about our ungodless, crazy abortion bill that just got through. [Critical race theory], intersectionality, there’s how many races in the world? There’s one race, it’s called the human race. There’s the LBGBQXYGL, whatever it may be, gender fluidity, sexual identity stuff. I mean, when you have on the cover of Newsweek a man that’s Woman of the Year, something is definitely wrong.”

Graupner serves as the national FEC chaplain and the Pikes Peak Faith Pillar Pastor for conservative activist group FEC United. The group’s founder, Douglas County podcast host Joe Oltmann, has claimed that public school teachers are “recruiting kids to be gay” and that LGBTQ teachers should be “dragged behind a car until their body parts fall off.”

Kirk, who was recently banned from Twitter for harassing the United States Assistant Secretary for Health Rachel Levine, a transgender woman, claimed that there is a comparison between transgender issues and abortion issues.

“The gender stuff and the pro-life stuff are separate, but you can put them in the same bucket which are kind of non-negotiables for the church, honestly,” Kirk said. “The gender stuff is so simple, it’s so easy. I’ve been outspoken about this for years, unapologetically — just because I don’t care, honestly. What’s so interesting is the men, women thing it’s a 95, 97% issue, it really is. Most people believe that there are men and women, they really do. They believe men can’t become pregnant, even though Apple believes they can. Here’s the thing, 97% percent of people agree with what I just said, but 99% of people are afraid to comment on it. It’s the most interesting thing. More people are empowered to speak out on the pro-life issue — praise God by the way because that wasn’t the case 10 years ago — we have bolder, more convicted pro-life activists than I’ve ever seen. People are more comfortable really getting into that topic, but the gender stuff it’s like ‘Woah, I don’t want to get canceled. The alphabet mafia or whatever is going to come after me.’”

Both Graupner and Kirk blamed churches for not taking a firmer stance against LGBTQ people.

“How do some of these guys call themselves pastors?” asked Graupner, who in 2007 told faith-based news outlet Assist News about his personal history as a gun and drug dealer in California during the 90s.

“When I was arrested, they were offering me a prison sentence,” Graupner told Assist News. “I took off on the run and I moved to the mountains and, as I said, I was moving a lot of guns at the time. They started finding my guns at different crime scenes and could track the guns back to me. So I had to hide in the mountains. The police would come by my Mom’s house every day looking for me and kind of harassing the family. So one day I snuck into a hospital where my Mom worked, and when she saw me, she started weeping and God just reached down and touched my heart. She said, ‘I can’t take it anymore. I don’t want to see you. Don’t come around us until you’re ready to clean up your life.’ I said, ‘What do you want me to do?’ and she replied, ‘I want you to go to rehab’, and so I agreed to do so. My Dad came and got me and I went into rehab, and there I gave my life back to the Lord in weeping and tears for about two hours. After this, the Lord miraculously delivered me from drugs and alcohol.”

Both Graupner and Kirk suggested churches need to get more involved in politics and government.

“One of the scriptures that is used a lot by churches — I think incorrectly — is Romans 13,” said Kirk. “You’ve probably all heard it and heard it cited a lot as a reason you must submit to the government. So it says in Romans 13 — I’m paraphrasing — but basically you need to submit to those in authority and basically that they’re there for your good. Think about it, who’s actually in authority here in America? We are. The people are in authority, so if you read Romans 13 through a constitutional lens, through the lens our framers and our founders gave us, it’s the governor of Colorado that needs to submit to us. It’s not that we submit to him, it’s completely different.”

“What I think the citizens, as well as the pastors, don’t realize is — you hear the quote, ‘Give to Caesar what is Caesar’s’ — what they don’t realize is we’re Caesar in this country,” he said. “It’s ‘We the people,’ right? We’re little kings. We’re sovereigns, ok? It’s not some unelected officials in wherever, but it is us as we the people standing up for our rights.”

He also suggested that churches should stop working with politicians who support progressive policies. “I think a problem is we have a lot of pastors that were sitting at the table that Jesus would overturn,” said Graupner. “Being on committees with [Governor Jared] Polis and everything else. This guy is a deviant. He forced [critical race theory] in schools, he forced gender fluidity and gender identity into schools, and here we have pastors sitting at the table with this guy, that Jesus would overturn.”

During a Feb. 15 caucus training, hosted by FEC United, at Fervent Church, attendees criticized Rep. Tim Geitner (R-Monument) for supporting a bill that would include LGBTQ perspectives in Colorado social studies classes. Geitner announced on Feb. 24 he would not seek election to House District 20.

Kirk argued that churches should be more active in pushing back against LGBTQ rights. “If they’re sitting there and agreeing to something that is unbiblical, I have no patience for that whatsoever,” he said. “That happens a lot, right? Where a lot of churches will say, ‘Listen, in the spirit of trying to build bridges, right, I’m going to be on this committee.’ Well, what does that committee stand for? What are you trying to push forward for? I’ll talk to anyone at any time, and we should be open to that, but at the same time, then, there will be a test of you. You must have the courage when, all of a sudden, [someone] says, ‘Hey, should we have nonbinary bathrooms?’ that you, as the pastor or as the Christian on that committee, are willing to sacrifice all of the good will that you might have brought up [by saying] ‘Actually no, I think men are men and women are women and I don’t think we should have nonbinary bathrooms in the state of Colorado.’”

“We can give you the reasons why this country was founded on Christian biblical principles,” said Kirk. “Founded by Christians, that 55 out of 56 signers of the Declaration of Independence were bible-believing, regular church-attending Christians. We can tell you have the Protestant Reformation led to the teachings of really the basis of Western Civilization that then led to [George] Whitfield and [Jonathan] Edwards and Jonathan Mayhew being the black-robed regiment that spurred on the fight for liberty in America. We can give you all of that. The best training available. That’s fixable. What’s not so easily fixable is the crisis that’s happening in America.”

During the Q and A portion of the evening, Kirk lashed out against University of Pennsylvania swimmer Lia Thomas, consistently deadnaming her, and concluding that the fathers of other swimmers should have stood up and forcibly prevented Thomas from participating.

“You need to intervene,” Kirk told the crowd.

Kirk also discussed issues around race. “I hate talking about race,” he said. It doesn’t motivate me and it shouldn’t motivate you. I believe we’re all made in the image of God. I couldn’t care less what your skin color is at all, in fact. I think that this entire conversation is so destructive, it’s so divisive and it’s so anti-biblical.”

TPUSA has come under scrutiny in the past for racism, and recently Ben Lorber, a research associate with social justice think tank Political Research Associates, tweeted that members of a TPUSA high school organization attended the Phoenix, Arizona, event 76Fest, an event organized by white nationalists.

Kirk announced that he will be speaking at the University of Colorado Boulder April 12, and a spokesperson with the school confirmed the TPUSA chapter there plans to host the event.