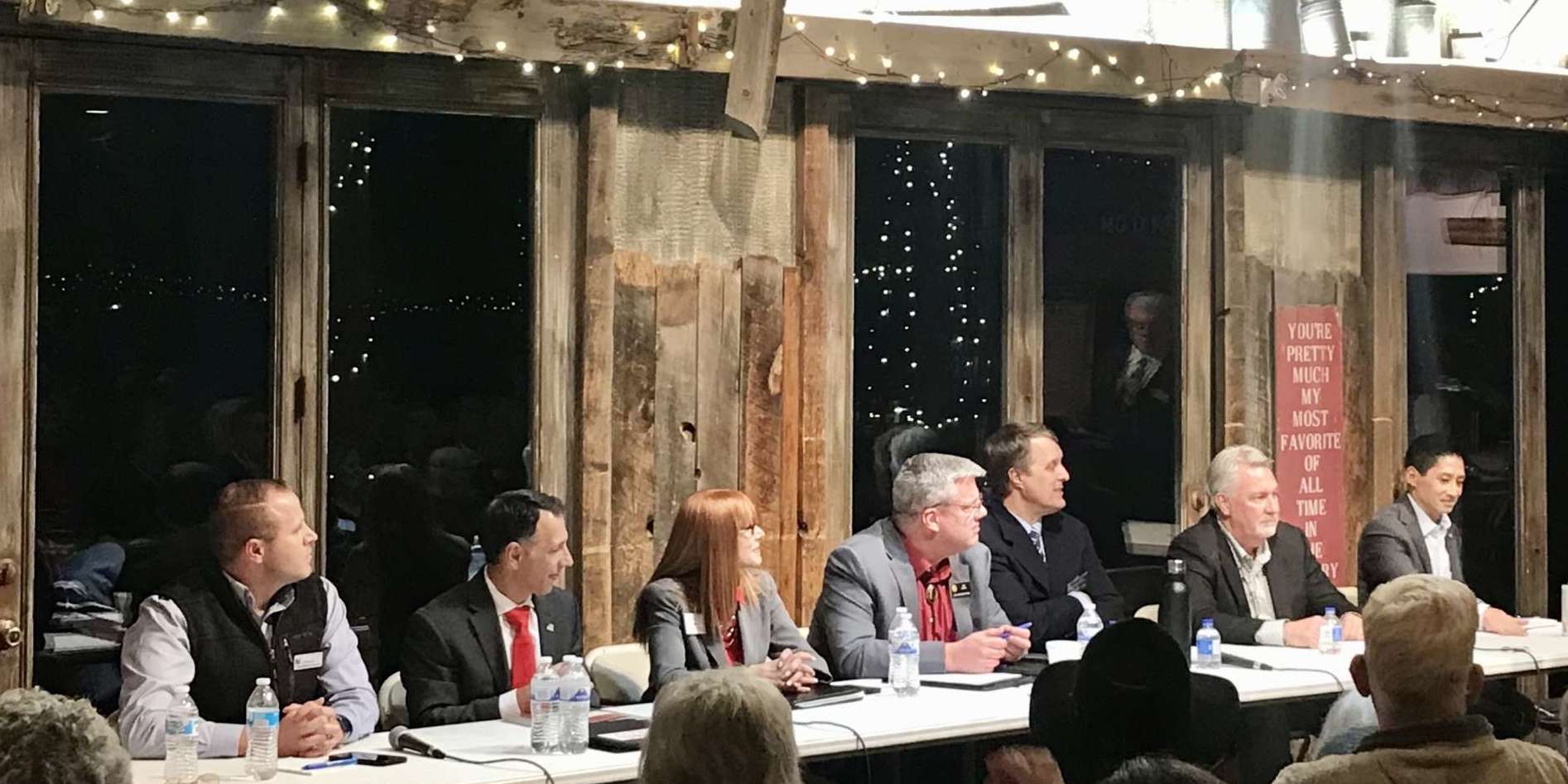 At a debate for Republican U.S. Senate candidates in Evergreen Tuesday, candidates were divided over whether it was appropriate for national Republicans to censure U.S. Rep. Liz Cheney (R-WY) last month.

Colorado talk radio host Randy Corporon, one of the moderators at the debate, asked the candidates if they supported the decision of the Republican National Committee (RNC) to censure Cheney. Corporon represents Colorado Republicans on the RNC.

“The RNC resolution to censure her is a good thing,” Hanks said. “I had high hopes for Liz Cheney and I’ve been sorely disappointed. I support the censure.”

“Cheney left our party a long time ago, the RNC just voted to make it official and I support that,” Campana said.

At the end of the debate, the roughly 100 people in attendance voted on whom they would vote to represent the Republican party in November against incumbent U.S. Sen. Michael Bennet (D-CO).

Campana and Hanks tied for first place in the straw poll.

Four of the other candidates, former Weld County GOP Chair Eli Bremer, Loveland businessman Peter Yu, Denver businessman Joe O’Dea, and Colorado Christian University professor Gregory Moore made the point that while they might not agree with Cheney, Wyoming voters should make the decision on her fate, not the state or national party.

“I believe that we need to allow the primary electorate to choose the primary winners,” Bremer said. “I disagree with Liz Cheney. I hope she loses her job. But she’ll face the primary voters and they’ll make that decision.”

Bremer explained that he disagreed with Cheney’s decision to join the Jan. 6 commission, which he deemed, “a commission designed for political theatre.” He also doesn’t think Republicans like Cheney should have voted to impeach Donald Trump after the Capitol riot because it “politicized the impeachment process.”

The last candidate, former radio talk show host Deborah Flora, did not give a definitive answer to the question regarding Cheney.

Corporon’s question also gave candidates a chance to voice their opinion of the Jan. 6 riot at the U.S. Capitol and the political response to it. Earlier this month, the RNC declared the attack “legitimate political discourse.”

Moore explained that he had a problem with the RNC’s decision.

“I have a problem with calling January 6 legitimate political discourse,” Moore said. “If you were on the west side of that building where they were using hockey sticks and breaking glass and fighting cops and sending people to the hospital — that’s not legitimate political discourse. However, on the other side of the building, the police were letting people go in. Patriots like Ron [Hanks] go in there and they weren’t breaking anything. I don’t call those people insurrectionists. They are patriots and they were let in.”

Hanks, meanwhile, defended his actions during the attack.

“I’m really angry Michael Bennet has called me an insurrectionist for having gone to 6 January,”
Hanks said. “I went to the Capitol with tens of thousands of peaceful, patriotic Americans concerned about their Government and nothing more. To call me an insurrectionist is an insult and there’s something wrong when a sitting senator calls you that.”

Hanks has previously said that the Capitol riot was a “false-flag operation,” implying that the people storming the Capitol were not actually Trump supporters.

Bremer, Campana, Yu, and O’Dea all made the same point in regard to the Capitol attack. The candidates each expressed their view that there was a double standard in how the Capitol rioters were being treated and how protestors from 2020’s police brutality protests were treated. They explained that they believe violence is wrong, but it should be punished equally across the board.

“If people were breaking the law with the BLM movement they should have been arrested,” Campana said. “I had two daughters working in D.C. and my wife, and I had a lot of sleepless nights. They were trying to bust out their windows, light their building on fire, all in the name of peaceful protests. And they were also there on January 6. They lived through that as well. Those that broke the law on that day should get a fair trial in court. They should have due process for them just like for the others. That’s the way America is built.”

“Regarding the events on January 6, if we have to ask why you’re breaking and entering into Government buildings, you’re wrong,” Bremer said. “None of the people screaming about this went after the BLM rioters. And yet we’re talking about January 6. I think breaking into federal buildings is wrong, no matter what the reason is. I support the rule of law every single time.”

In response to this increasingly popular Republican talking-point nationwide, Black activists point out that while the Capitol attack was based off debunked claims of election fraud by politicians who lost those elections, the police brutality protests were a response to systemic and very real injustices to marginalized communities. They are also pointing to the difference in police response to the 2020 protests compared to the Capitol attack.

Additionally, according to studies by Harvard and the Washington Post, 97% of police brutality protests during the summer of 2020 were completely peaceful and 95% of protests existed without any personal injury or property destruction.

There was undoubtedly looting, arson, and vandalism during the police brutality protests. But the lawbreakers were arrested and punished for their crimes, in spite of what Bremer and Campana implied in their answers.

Flora did not reference the Capitol attack in her answer.

The debate moderators, which included Mountain Republicans President and ex-reality TV star Rich Wyatt and 285 Tea Party leader Mason Lee as well as Corporon, did ask the candidates questions where they all agreed.

All seven candidates agreed that if elected they would not ban machine guns, that China is an unfair trading partner, and that America needs to build a complete wall on the U.S.-Mexico border.

The complete results of the straw poll are below.

After the conclusion of the debate, Campana said he was humbled to tie for first place.

“I’m humbled,” Campana said. “I’m also very grateful to all the people who came out tonight. It’s a beautiful venue. I believe I can beat Michael Bennet.”

Before the debate began, Hanks again raised concerns over the legitimacy of the straw poll results from his own party. In opening remarks, Wyatt ensured the crowd that the votes would be counted fairly and in full view of the candidates.