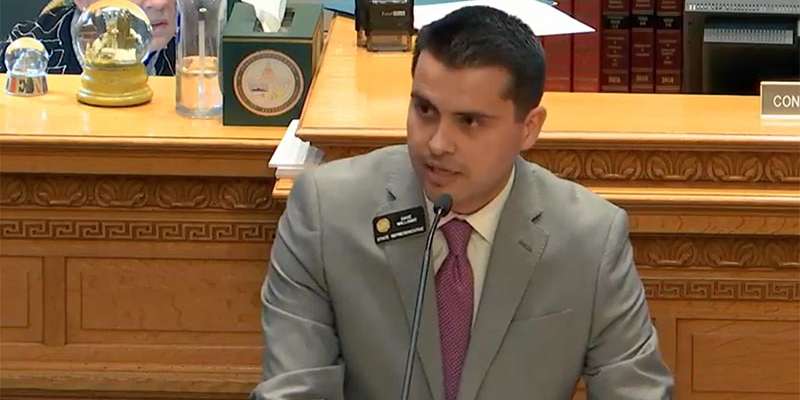 Earlier this week, during an interview on KNUS’ Peter Boyles show, state Rep. Dave Williams (R-Colorado Springs) refused to back down on baseless claims that the 2020 election was stolen.

In December, Williams announced that he was challenging the incumbent U.S. Rep Doug Lamborn (R-CO) in the Republican primary for Colorado’s 5th Congressional District, which includes the Colorado Springs area.

“Quite frankly, I’m not taking any more of the Democrats’ crap or even the establishment Republicans’ crap anymore,” Williams said.

When questioned by Boyles on what he meant by “crap,” Williams elaborated: “Crap means that they’re lying about what’s going on here. … Well, first of all, there’s a big hullabaloo about an amendment saying, you know, we supported Jan. 6 rioters or anyone that broke the law. That wasn’t the amendment whatsoever.”

This was in reference to a controversial amendment that Williams introduced at the Colorado legislature. The amendment proposed that the Colorado Assembly give thanks to the insurrectionists who stormed the U.S. Capitol on Jan. 6 last year. This would include state Rep. Ron Hanks (R-Canon City), a U.S. Senate primary candidate, who admitted to crossing police barriers on Jan. 6.

“You were seeing that anyone who protested peacefully is somehow a part of an insurrection,” Williams said. “And no matter what you think of Ron Hanks, you know, the guy did not break the law.”

The topic of discussion soon shifted to election fraud, both in Colorado and nationally. Claims of fraud have been debunked by numerous sources, and even right-wing audits have come up empty, something which Boyles attempted to emphasize.

“I know that you and Hanks claimed that, I think it was 5,600 people voted in the 2020 election and that was fraud,” Boyles said to Williams. “And John Hickenlooper really didn’t win against Cory Gardner. That kind of stuff. With love in my heart, Dave, that’s crazy.”

“I didn’t say that,” Williams said. “Well, you know, the media can say whatever it wants.”

Boyles cited a 2021 town hall held in Colorado Springs by state Reps. Williams and Hanks. During this town hall, Williams claimed that more than 5,600 deceased voters took part in the Colorado election and that voter fraud helped John Hickenlooper to win the election.

Williams seemed to disagree on what exactly he said during that town hall. Though he continued to cast significant doubt upon the results of the 2020 election, he refused to say outright that fraud took place in Colorado – at least, not without being able to audit the results.

“I said that we need to look into it [claims of fraud]. And then I did receive a question about whether or not fraud may have been a factor in Hickenlooper’s race,” Williams said. “And I said, maybe, but I don’t know, because we can’t look at it.”

“Dave, you are credited with saying fraud played a role in Hickenlooper’s victory against Cory Gardner,” said Boyles. “The fact is, you said 5,600 dead people voted. … First of all, that’s not enough to swing the election, but second, why do you say it when it isn’t true?”

“I don’t care what the media said,” Williams replied. “I said, this is what we discovered and we can’t look at it. And that’s trouble.”

When Boyles quizzed Williams on his overall thoughts on election integrity, he gave the same refrain.

Williams went on to speak in support of Mesa County Clerk and Recorder Tina Peters, who is under federal investigation for leaking confidential election data.

“What I think is so interesting about that Tina Peters case is that they’re having to convene a grand jury because they don’t have enough evidence on their own to actually mount your charge against her,” Williams said.

According to the U.S. Department of Justice, a grand jury’s purpose is to examine the existing evidence, including testimonies from the prosecutor and witnesses, and decide on whether enough evidence exists to charge the defendant with a crime. A grand jury can be convened regardless of the amount of evidence that exists. This process will give the case more public credibility – something which is essential given the misinformation that mires the election integrity debate.

Throughout the interview, Boyles repeatedly warned Williams against talking about election integrity in his primary campaign.

“Start this up, and you have to win a general election, whether you usurp Lamborn or not, but in November, all of this is going to be thrown back in your face,” Boyles said. “I’m trying to help you.”

“This is something that every American has a right to be able to look into. And we need to look under the hood to make sure the engines are running properly,” Williams reiterated. “And if anyone says you’re a conspiracy theorist for doing it, they’re sorely wrong. And let me tell you this, everyone keeps saying that we shouldn’t talk about this. … Well, I can tell you this, the Democrats want to talk about it.”

“Listen to me. They’re going to use it against you,” Boyles said. “Of course, they want to talk about it. They want to keep you doing this stuff.”

Listen to the full recording here.