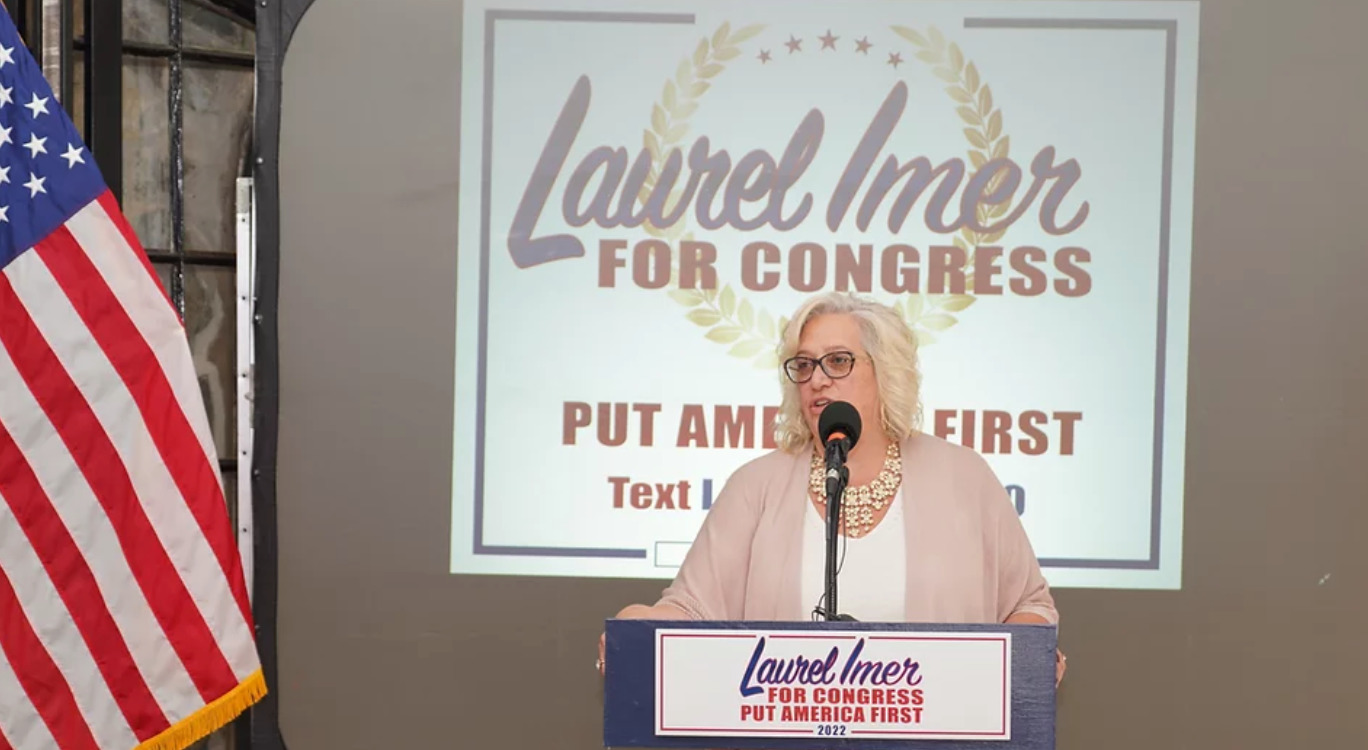 Just over a year after her mother became seriously ill from COVID-19, Colorado congressional candidate Laurel Imer — the former Jefferson County Chair for Donald Trump’s 2016 presidential campaign — is making baseless claims about medical professionals, the pandemic, and the COVID vaccines, as well as the government’s role in all of it.

Although Imer, who’s running for a congressional seat located mostly North and West of Denver, made a wide range of claims Saturday on KNUS radio and in a subsequent interview with the Colorado Times Recorder, some noteworthy examples were her ideas that medical professionals were beholden to the government and that the pandemic was being used to “manipulate the minds and hearts of American citizens.”

In her interview with Colorado Times Recorder, Imer stated that the government and media were colluding to “spoon-feed” a particular narrative about COVID to the public and that doctors and others like herself who disagreed with the dominant narrative were being silenced.

In Imer’s view, private hospitals have played a part in the government’s plan. She told Colorado Times Recorder that hospitals have been exaggerating their COVID case counts and intentionally misrepresenting the diagnoses of large numbers of patients in response to financial incentives from the government — a claim also promulgated by Trump.

Imer also stated that she personally knew someone who had died and said his death certificate had falsely listed COVID as his cause of death. Colorado Times Recorder could not corroborate this statement because Imer declined to give further details on this person’s identity.

A fact check confirmed that the government does allocate more money to hospitals with greater numbers of COVID patients — the extra money is necessary because COVID patients may require more intensive care compared with others — but found no evidence that hospitals have been intentionally misclassifying patients or inflating their case numbers.

As proof for her various claims around the pandemic, Imer sent Colorado Times Recorder links to articles from the Association of American Physicians and Surgeons (AAPS), an anti-government group that is skeptical of mainstream science and opposes ideas like mandatory vaccination for smallpox, measles, and other preventable illnesses.

Additionally, Imer forwarded a link to an article by Dr. Peter McCullough, a widely-discredited physician who has been sued by a former employer for making false claims about COVID.

But Imer’s conspiratorial rhetoric has gone beyond allegations of government overreach and corruption within the private health care sector.

On Saturday’s radio show, she alluded to the unproven conspiracy theory that China had bioengineered SARS-CoV-2 as a weapon, calling it the “Wuhan Chinese bioweapon virus.”

Imer also expressed skepticism about the efficacy of COVID vaccines, citing family members and other people she apparently knew who had been hospitalized with COVID despite being vaccinated.

When Colorado Times Recorder asked for more details about how many people she knew in this category, she said that she didn’t know for sure, but that people’s vaccination statuses should be private.

“I don’t know specifically about all of their vaccination statuses, but I know that several of them were vaccinated,” Imer said. “That’s their private health information, whether they’re vaccinated or not. Have I asked you for your Pap smear results or whether your family has had their annual colonoscopies? It’s not the world’s business.”

Imer’s statements about COVID and the vaccines come just over a year after her mother, Esther Isom, was hospitalized with COVID. According to Facebook posts from Imer’s son, Weston Imer, Isom was admitted to St. Anthony Hospital in late 2020 due to a “chest x-ray which clearly showed COVID-19 in her lungs.”

According to Imer, she herself had been hospitalized around the same time. She said neither she nor her mother had the opportunity to be vaccinated before their illnesses because vaccines were not available at that time.

Other members of Imer’s family, including two of her brothers, have become severely ill and been hospitalized with COVID. One of the two, she said in her radio interview, had been fully vaccinated. She recounted an anecdote of taking the vaccinated brother to an emergency room in Golden, although the exact circumstances that led to the ER visit are unclear.

“When I checked my brother into the emergency room, the receptionist — the nurse — asked if he was vaccinated and he said ‘yes,’” Imer told Corporon. “She said [the vaccines are] a crock of crap. And I thought, these people know, right? They know, and they are forced into this system, and their hands are tied by the radical government.”

She went on to say that during her brother’s hospital visit, she asked a doctor for Ivermectin, an unproven treatment for COVID, and the doctor denied her request, explaining that his “hands were tied” by the hospital administrator.

Imer told Colorado Times Recorder she believes that “alternative treatments” such as Ivermectin should be available to those who want them.

Ivermectin is an anti-parasitic medication that has gained popularity within conservative circles as a possible treatment for COVID. Current data does not show that Ivermectin is effective against COVID, and medical experts say it can also be dangerous.

“The Government’s Role Is To Stay Out of Our Bodies”

Initially, Imer had called in to KNUS to ask for listeners’ help with distributing donated goods to victims of the Dec. 30 Marshall fire in Boulder County. But she told KNUS host Randy Corporon during Saturday’s interview that she needed the extra help because many people, including her family members, were sick with COVID.

Corporon, a founder of the Arapahoe County Tea Party and known election conspiracist, leapt at the opportunity to segue into a discussion about the illness, which he called “flu-rona.”

Despite state data showing that the majority of patients hospitalized for severe COVID symptoms in Colorado are unvaccinated, Corporon made similar claims to Imer’s, stating that of the people he knew, those who received the “so-called vaccines” had suffered the worst symptoms from the virus.

“It’s so important for people to remember that because we have the lie that this is a pandemic of the unvaccinated,” said Corporon, who was elected by GOP leaders last year to represent Colorado on a national Republican committee.

The omicron variant of SARS-CoV-2, which has been circulating in the U.S. since early December 2021, is highly contagious and has been known to infect fully vaccinated people, but COVID vaccines appear to be the best line of defense in preventing severe illness and death from the disease. The vaccines have been shown to be safe and effective, and the CDC says that the benefits far outweigh the risks.

Even so, Imer has continued to sow doubt over the vaccines and espouse the virtues of personal freedom. She told Colorado Times Recorder that all Americans should have the freedom to choose whether they want to be vaccinated, wear masks, or take other precautions widely recommended by public health experts, and she opposes vaccine and mask mandates.

Imer faces fellow Republican Erik Aadland in the GOP primary race to take on the Democratic nominee for Colorado’s 7th Congressional District. Democratic State Rep. Brittany Pettersen of Lakewood announced her candidacy for the seat last week after longtime Congressman Ed Perlmutter (D-CO) said he would not run again. Another Republican, state Rep. Colin Larson of Littleton, is considering a run for the seat as well.

Imer’s full radio interview with Corporon can be found here (her interview segment begins around the 5:45 mark).