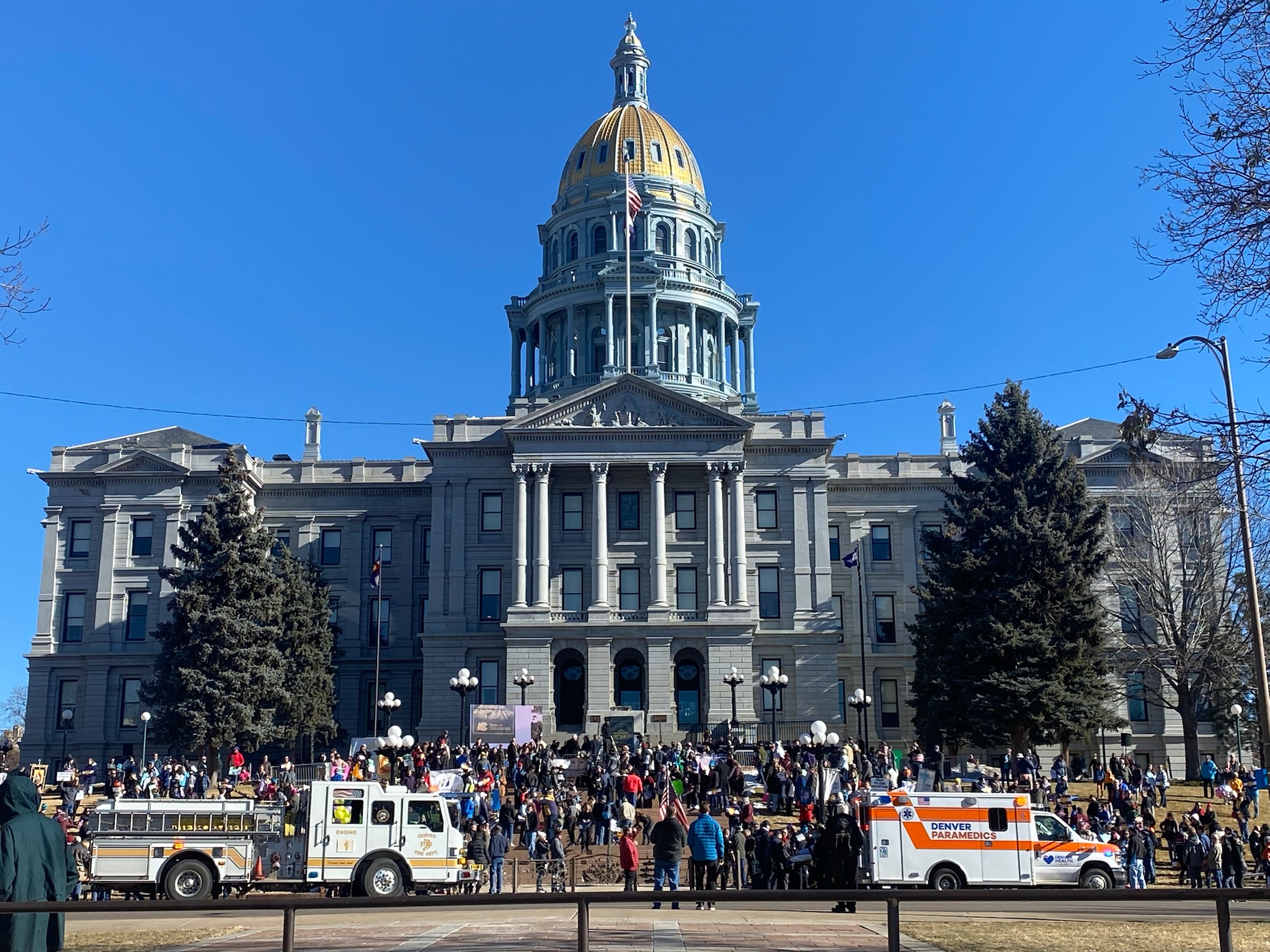 This year’s Colorado Celebrate Life Rally commenced on the west steps of the Colorado Capitol Saturday afternoon with large crowds gathering and carrying signs with anti-abortion slogans, emboldened by the Supreme Court’s recent decision to hear arguments in a Mississippi case that threatens to reverse a 50-year precedent of federally protected access to abortion vis-à-vis 1973’s Roe v. Wade decision.

Meanwhile, with Wednesday’s start of Colorado’s 73rd legislative assembly, Democratic legislators have announced their intent to introduce a bill protecting access to abortion throughout pregnancy for women in the state, setting a dramatic and contentious backdrop for advocates on both sides of the issue.

Saturday’s rally and march, sponsored by Respect Life Denver, an arm of the Denver Archdiocese, was preceded by a Catholic mass celebrated by Archbishop Samuel Aquila at the Basilica of Immaculate Conception.

The rally began outside the legislative chambers at 1 p.m. with master of ceremonies Dan Caplis, a conservative talk radio host and a sponsor of the rally, welcoming the crowd and laying out the seminal nature of current political and judicial landscapes around the issue of abortion in America and in Colorado.

Caplis told the crowd that Roe v. Wade, pending the upcoming Supreme Court ruling in the Mississippi Dobbs case, is on the verge of being relegated to the “ash heap of history.”

“When Roe falls,” Caplis told the enthusiastic crowd, “you’ll be able to come to this place and state legislatures across America and actually have a chance to make law and save babies. So today, let’s use the joy and the momentum from that victory to fuel us as we now get ready to climb every one of those peaks — those doors that you have kicked open — and go out and together get to that promised land where every child can be saved.”

“Like all the great civil rights movements, it’s not partisan. It’s completely non-partisan,” he told the crowd. “It’s not left or right, it’s not red or blue. It’s right or wrong. It’s crystal clear, … and everybody from both parties or no party at all is equally welcome in this premier civil rights movement.”

“The debate over abortion and life is intensifying across the nation, including right here in Colorado. In 2020, Coloradans put proposition 115 on the ballot, which, if it had passed, would have prohibited abortion after 22 weeks. Now, in 2022, my Democratic colleagues are bringing forth legislation that will codify abortion all the way up until the moment of birth in state law,” Kirkmeyer said, to loud boos from the crowd. “It’s a scary proposition. As Coloradans, we don’t want to be the most radical abortion state in the nation, which we will be if this proposed bill passes into law. Today I stand with you and I march with you as your state senator, as a mom, as a grandmother of six. And I will continue to fight for the lives of the preborn children at the capitol everyday, because taking the innocent lives of children for convenience is not and never will be a tenet of a decent, moral, and just society. We can never stop fighting. Never!”

Last week, in a preview of the legislative session, Democratic House Majority Leader Daneya Esgar (D-Pueblo) highlighted the 2022 bill referenced by Kirkmeyer in her speech, telling The Colorado Sun she will prioritize legislation to ensure access to abortion while federal protections are debated.

“It’s clear that a patient’s fundamental right to have an abortion is at risk nationwide in our country right now,” Esgar said. “And we’re not going to just stand by and let Republican politicians put it at risk here in Colorado as well. We are going to codify the right to an abortion and stop any and all efforts to limit abortion access in our state.”

Initiative 115, the 2020 Colorado referendum banning abortions later in pregnancy, which Kirkmeyer referred to in her speech, was defeated by nearly 18 percentage points.

Previous state referendums known as “personhood” measures — proposed statutes stipulating that life begins at conception and thereby banning any abortions, including for rape and incest — similarly failed in 2008, 2010, and 2014.

The current chairwoman of the Colorado Republican Party, Kristi Burton Brown, cut her teeth in activism at age 20, by leading the initiative effort in 2008.

Another initiative has been proposed this year by anti-abortion activists. Initiative #51 was recently rejected by the title board. It proposes “equal protection of any living child in Colorado that will prevent purposeful killing of any living child before, during or after birth.”

Saturday’s rally at the Colorado capitol building also featured speeches by Auxiliary Bishop to the Archdiocese of Denver, Jorge Rodriguez, who addressed the crowd in English and Spanish, thanking them for their advocacy and activism.

The theme for this year’s rally was “Honoring Courageous Mothers.”

The McGarrity family, adoption and Down syndrome advocates who had appeared at the 2019 Celebrate Life Rally, also addressed the crowd. The family has eight children — adopted and biological — four with Trisomy 21, a genetic condition commonly known as Down syndrome. Sonia McGarrity was presented with a certificate honoring her as a courageous mother, in line with the theme of the rally.

Also in keeping with the theme, Joshua, a student from St. John the Baptist Catholic Church in Longmont read his essay honoring St. Elizabeth, for which he was awarded a commendation.

A representative of Knights of Columbus detailed that organization’s efforts to donate ultrasound machines to crisis pregnancy centers so that they can offer free ultrasounds to pregnant women. He shared an anecdote of a woman who changed her mind when her 7-year old daughter, attending the ultrasound session with her mother, exclaimed, “Look, Mommy! The baby is waving at us!”

Donald Sweeting, president of Colorado Christian University (CCU), gave a forceful address encouraging activists to step up their efforts in all sectors of society to end abortion in America.

He told the crowd about CCU’s national standing as a pro-life university and mentioned CCU’s think tank, the Centennial Institute, as a lobbying arm to support anti-abortion legislation and its efforts to thwart “the so-called Reproductive Health Equity Act.”

Sweeting cited Colorado, along with California, New York, and Oregon as states “when Roe v. Wade is overturned, will become travel destinations for women seeking abortions” and where activists and lawmakers, will attempt to protect abortion access throughout pregnancy and “even after birth, if necessary,” which has recently become a misleading and false clarion call for anti-abortion activists.

Closing the rally, Caplis celebrated Denver Archbishop Samuel Aquila as a fearless truth-telling leader and told the crowd to congratulate themselves for the progress they’ve made. “One way or another,” he said, “Roe is dead! And that is because of you!”