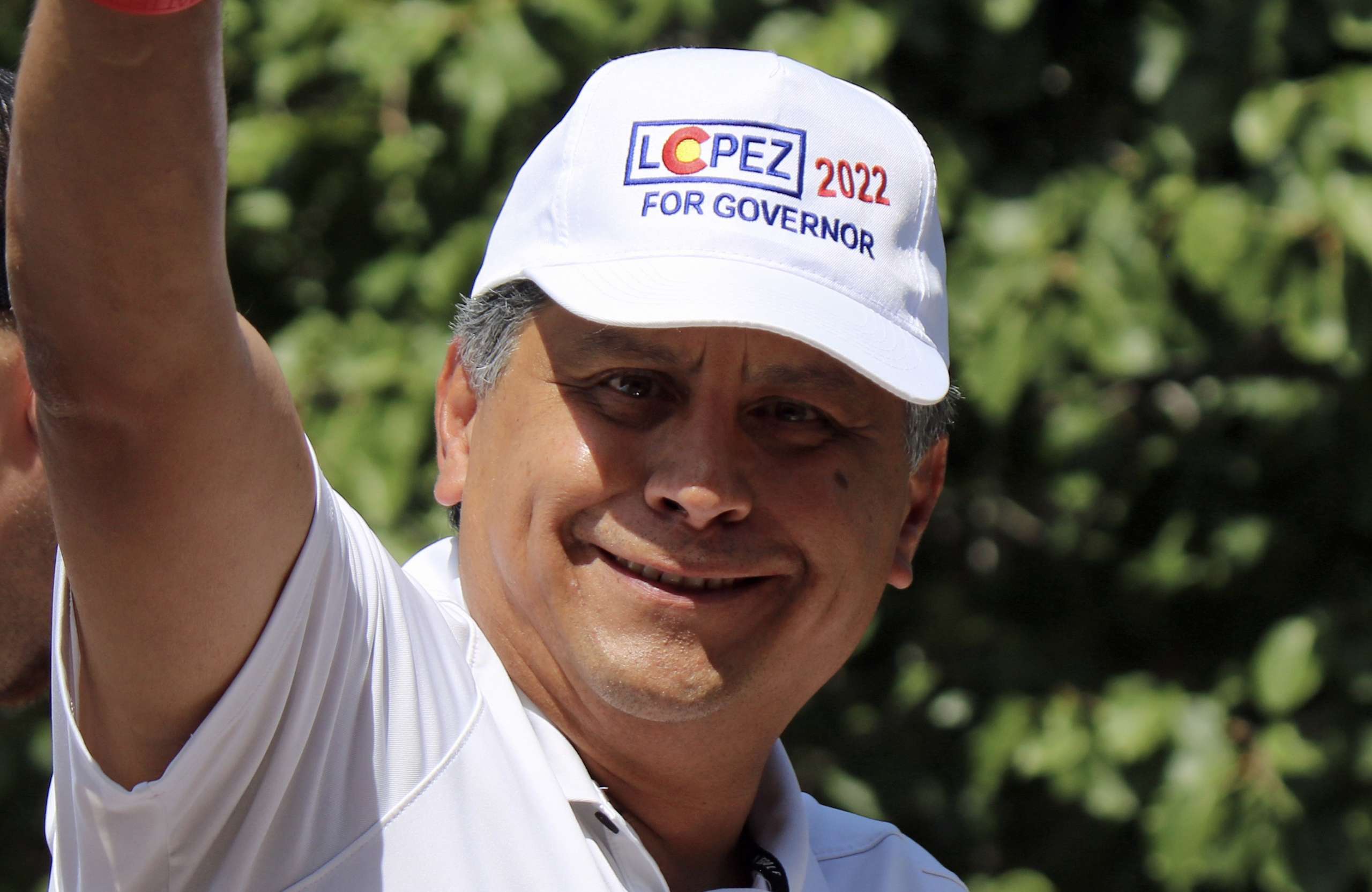 Greg Lopez, a Colorado GOP gubernatorial candidate looking to unseat Democrat Jared Polis in 2022, addressed the crowd at a Dec. 1 rally on the steps of the Grand Junction Old Courthouse, announcing his support for embattled Mesa County Clerk and Recorder Tina Peters and conservative activist and fellow-election fraud conspiracist Sherronna Bishop following FBI searches of their homes as part of investigations into election security breaches.

In his KNUS interview with Randy Corporon last Saturday, Lopez explained that due to their misinterpretation of his statement, Boyles and other critics mistakenly lump him in with election fraud conspiracists, when really he is only supporting efforts to verify integrity in the “election process” and defend constitutional rights.

“I’m glad that Peter finally acknowledges that I’m running for governor,” quipped Lopez, who was once mayor of Parker.  “…It seems like any time — for Peter — when he hears ‘voter integrity’ his hair catches on fire and he goes automatically to, ‘There’s a big lie, there’s a conspiracy!’ And it was interesting because Channel 9 did say when they were introducing my remarks, they said, ‘You know what? Greg spoke about election process integrity.’ And it seems like people forget that middle word. You know, I’m not talking about the outcome of the election. We all know what the outcome is. I was talking about, ‘We must … protect our constitution and protect the election process integrity because those are the keystones of our country. And if we lose those, then we really become a third world country.”

Lopez says he’ll appear on The Peter Boyles Show on KNUS tomorrow, Dec. 9, between 7 and 8 a.m. to discuss this issue.

In a telephone interview with the Colorado Times Recorder yesterday, Lopez reiterated the same explanation he gave to Corporon, adding that his support for Sherronna Bishop is rooted in the defense of her First Amendment Rights to hold the rally and state her case, in the face of what Lopez previously characterized as bullying by the FBI.

“We had two Americans that the FBI had broken in their doors, looking for whatever they were looking for,” said Lopez. “However, we have a right to be able to speak publicly and privately about things we agree with and things we disagree with. So, it’s important for us to have the Constitution that allows us to do that. And that was what Sherronna Bishop was really standing up for — allowing her voice to be heard,” explained Lopez. “And I think that we all want our constitutional rights [such] as the First Amendment, which is freedom of speech.”

Regarding his support for Tina Peters, Lopez wouldn’t comment on allegations of criminal and ethical breaches of election security measures, for which Peters has been removed from her election supervision duties by Colorado Secretary of State Jena Griswold and which instigated a decision to replace Mesa County’s voting equipment.

“When you look at what Tina Peters did, at least from my understanding,” Lopez said, “she took a screenshot of some of the files. And then there was this trusted update and there was another screenshot taken. And there were files missing that had been deleted. … So the question is, “Why?” Why were these files deleted and who authorized the deletion of these files? And if we’re supposed to protect this data, then we should all be concerned that this data was erased. Tina Peters, as an elected clerk and recorder, has a certain fiduciary responsibility to maintain this information. Whatever drove her, whatever caused her to have some concerns that I need to take the screen shots knowing that there’s going to be an update later. Something was giving her pause for concern. You know, was there a better way to do it? I can’t speak to that because I’m not in her shoes. I’m not the one that’s being held accountable for everything and anything that the law requires. And so I support her and her decision. I don’t think it was malicious. I don’t think she was trying to do anything outside of ensuring in her mind that she was fulfilling her duties and her responsibilities to the best of her ability.”

Peters has submitted an 89-page report to the Mesa County Commission, explaining the nature and importance of the purported missing files. While that report is being reviewed, preliminary assessments by Mesa County cyber security experts have downplayed its relevance to Peters’ claims.

“I can’t speak for other states. I don’t know what happened in those other states,” Lopez said. “All I know is what I saw — that everybody saw — with the videos of suitcases coming out from underneath tables, you know, and hearing some of those things. There’s enough out there from different sources and different cameras. The thing that gives me pause for serious concern. Did we, as a nation in every single state, protect the election process integrity? And I think that’s a valid question to be asking. … And who knows if we’ll ever find out what actually occurred? I mean, people are still questioning and debating what happened with the Kennedy assassination, what happened with other major situations, right? But I think it’s important for us to always remember that the Constitution allows us to have those questions, you know, allows us to at least ponder what actually transpired. And that’s what I was standing for. I was standing for the Constitution, saying we have a right to stand on any steps and question this and make our statement [and] our opinions known as Americans.”

Lopez also ran for governor in 2018. He was the first of 11 candidates vying for the Republican nomination to formally announce his 2022 campaign for Colorado governor.