by
Madeleine Schmidt
posted on
February 22, 2018

Two bills seeking to curtail access to abortion were defeated in Colorado’s state legislature today following a press conference during which several reproductive rights advocates spoke out–including some who explained how access to safe and legal abortion has been crucial in their personal lives.

HB18-1225, which was sponsored by state Rep. Stephen Humphrey (R-Severance) and state Sen. Kevin Lundberg (R-Berthoud), would have banned nearly all abortions by defining life as beginning at conception, giving legal rights to fertilized eggs and fetuses.

Victoria Betancourt of the Colorado Organization for Latina Opportunity and Reproductive Rights (COLOR) said she made the decision to get an abortion due to her financial situation and her health.

As the sole income earner in her household and the sole caretaker of a disabled parent who suffers from Multiple Sclerosis, Betancourt said that expanding her family wouldn’t have been economically viable.

And, due to medical conditions of her own involving multiple spinal fusion surgeries, pregnancy for Betancourt would mean being bedridden for months.

“As the only person generating income in my home, being out of a job and out of a paycheck for any period of time is a serious threat to my wellbeing and that of my elder,” Betancourt explained. “Abortion care provided me the opportunity to stop short of falling into deeper poverty.”

Betancourt also pointed out that women of color already face extra barriers when it comes to accessing quality affordable health care, and that the added regulations on abortion proposed by Republicans would only put her community at a further disadvantage. 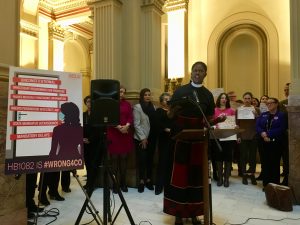 “Women of color are struggling to obtain affordable quality health care,” said Duval. “It is unconscionable for us to allow politicians to add barriers to reproductive health services.”

Rev. Duval also lambasted politicians who use their faith as a license to discriminate against women.

State Rep. Dafna Michaelson Jenet (D-Commerce City) also told her abortion story. Michaelson Jenet said she worked hard to become pregnant during a second marriage only to discover complications in her pregnancy at 17 weeks. By 20 weeks, she said her fetus’ heart had stopped beating, and she decided not to carry an unviable pregnancy to term.

Unbeknownst to Michaelson Jenet at the time, that procedure is still considered an abortion, and she had to go to a licensed clinic and pay $550 out of pocket for the procedure, which wasn’t covered by her insurance.

“We need to make sure that we don’t only prevent these bills from becoming law,” said Michaelson Jenet, “but we need to expand the scope so that anyone, regardless of their financial situation, can access an abortion.”

Jenet first spoke about this experience in a Denver Post op-ed as Congress was considering a ban on abortions after 20 weeks. 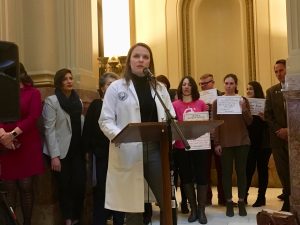 The conference also featured Dr. Jennifer Pitotti, a Denver OB/GYN who expressed alarm at the lack of sound medical research for many aspects of HB18-1082 and called the bill “insulting” to herself and her colleagues. Pitotti added that she aims to provide high-quality care to her patients “without the government inserting itself into my exam room.”

As the press conference drew to a close, several women filed in dressed as handmaids from Margaret Atwood’s dystopian novel The Handmaid’s Tale, which depicts a nation where the government assumes full control over reproduction and women’s bodies.

Nearly identical bills have been defeated in the state legislature for the past few years, causing many to criticize state Republicans for continually pushing legislation that runs contrary to the will of Coloradans.

And they have a point.

Colorado voters have three times rejected efforts to enshrine fetal personhood in the state’s constitution, rejecting a ballot measure most recently in 2014, and yet, year after year, state Republicans attempt to pass personhood legislation.