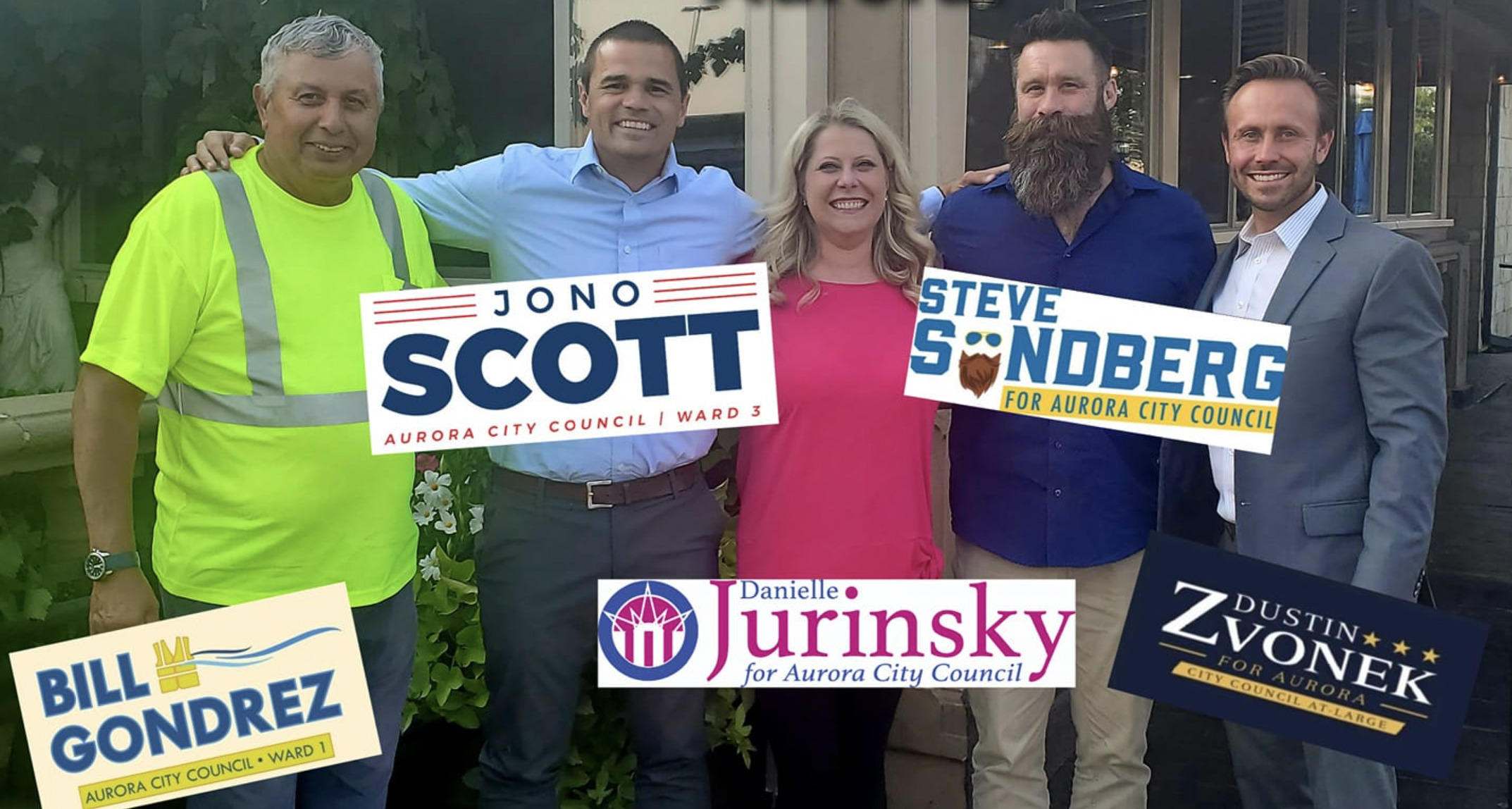 The partisan back-scratching between Ganahl and Jurinsky is part of a coordinated effort by Colorado Republicans statewide — as well as a group of conservative candidates in Aurora — to gain a majority on the Aurora Council.

The conservative slate promotes itself by, among other things, referring to one another in media appearances, endorsing each other, and sharing photos and messaging on social media.

Three of the five shared the same photo on Facebook of themselves with their campaign signs, under the slogan “For a stronger, safer, Aurora!” with comments boosting each other.

“The 5 of us push each other, support each other, and cheer each other’s successes!” wrote Jurinsky on Facebook, calling the four other candidates her “band of brothers.”

On his Facebook page, Sundberg wrote that the same photo is, “Your one picture 2021 Aurora City Council Voting Guide.” Scott’s comment on the same group photo was, “Ready to serve Aurora!”

These candidates, who rave about each other on right-wing radio and have been backed by the Arapahoe County Republican Party as well as the Colorado Republican Party, don’t trumpet their conservative credentials in Aurora, whose electorate is 35% Democrat, 43% Unaffiliated, and 22% Republican. The election is technically nonpartisan, so the candidates’ party affiliations won’t be listed on the election ballot.

But it’s a deeply conservative bunch.

Zvonek, for example, worked for some of Colorado’s most right-wing entities, such as the Koch-Brothers-funded Americans for Prosperity, and Republican lawmakers, including Aurora Mayor Mike Coffman and, before him, former U.S. Rep. Tom Tancredo, who gained national attention for his presidential campaign focused on bombing Mecca and expelling undocumented immigrants.

Sundberg and Jurinsky both refused to get the COVID vaccination, according to the Aurora Sentinel, aligning themselves mostly with conservative extremists in Colorado and nationally and leading a left-leaning Sentinel editoail to question their “judgment.”

Jurinsky told KNUS’s Peter Boyles that she carries a “Tomcat Beretta 32” gun with her and that she welcomes being compared to U.S. Rep. Lauren Boebert (R-CO).

Jurinsky says she knows how to “rebrand” the Republican Party, to make it “cool.”

“We need to rebrand ourselves,” said Jurinsky, when asked by KNUS’ Peter Boyles in June what Republicans need to do to win in Colorado. “We need a new image and we need passion. We need fire. We need intensity. And I mean, as crazy as this sounds, we need to be cool. You know, the left is killing us.”

Scott wrote last year on Facebook that the pandemic was a “perfect opportunity” for elected Republican leaders, like Trump, to “issue an executive order to close all abortion facilities in their jurisdiction because of the potential for loss of lives.”

All five conservatives were asked to comment, but only Jurinsky and Gondrez replied.

Jurinsky said she was misquoted “a couple of times,” but didn’t respond to a request to specify the errors so they could be corrected. Gondrez comment was: “Nuts.”

The coordinated effort to take over the Aurora City Council was apparently first made public by Aurora’s GOP Mayor Mike Coffman, who admitted back in June that he was using a proposed camping ban to elect fellow conservatives to the Council in the November election.

So the partisan campaigning in the race has come as no surprise to political observers in Aurora, including Zvonek, even though he writes on his website about “all the non-partisan reasons why I’m running for Aurora City Council.”

“Like anything in today’s world, I don’t think anything really is nonpartisan,” said Zvonek bluntly in July on a radio show hosted by George Brauchler, a well-known Republican, who’s endorsed Zvonek.