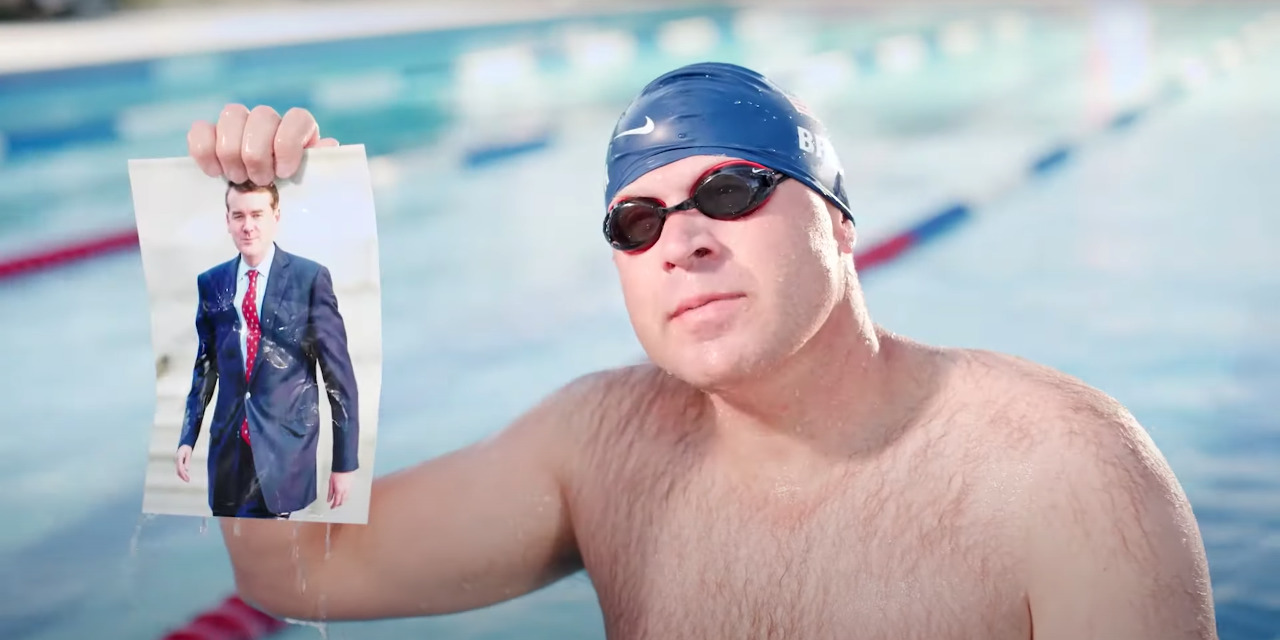 In a campaign video, an interview with Fox News, and a radio interview on Colorado’s 710 KNUS station, Bremer made misleading claims when explaining why he would make a better Senator than Bennet.

Bremer’s announcement video follows Bremer as he bikes, swims, and runs around Colorado with posters with Bennet and the word ‘Missing’ on them.

“The problem with career politicians like Michael Bennett is that they spend more time hiding from their constituents than actually serving them, more time at cocktail parties in D.C. than solving our problems back at home, or talking to voters in New Hampshire rather than Colorado,” Bremer said in his ad.

The ad is reminiscent of the viral advocacy campaign “Cardboard Cory” which criticized former U.S. Sen. Cory Gardner (R-CO) for his reticence to hold town halls and meet with constituents from his home state. At point Cory Gardner had not held a town hall in Colorado for almost 500 days.

In fact, Bennet is a fairly visible figure in Colorado. He regularly hosts in-person and virtual town halls and within the past year, Bennet has visited all 64 counties in the state in order to shape his priorities for COVID-19 relief.

Claim: Bennet has only passed one bill into law while in office

“[Bennet is] more interested in attending D.C. cocktail parties than taking on real issues,” Bremer said in a statement released yesterday. “In 12 years, he has authored one piece of legislation that has been signed into law. One. As the next U.S. Senator from Colorado, I will work for pragmatic solutions that positively impact Colorado and America.”

Bremer repeated his claim that Bennet has only authored one bill that has been signed into law during his 12-year tenure as Senator in his announcement video and in his KNUS interview.

Bremer’s campaign staff provided the Colorado Times Recorder with the source for this claim. The official U.S. Congress website lists Bennet as only having sponsored one piece of legislation while in office that was signed into law.

For example, last year Bennet introduced a bill to establish a process for updating prescription drugs with outdated labels which was eventually included in December’s COVID-19 stimulus package.

Not included in those numbers are the sections of bills Bennet wrote intentionally for incorporation into larger packages. Bennet wrote bill language to expand child credits — which experts say will cut child poverty in half — and increase broadband access for inclusion in the American Rescue Plan and Infrastructure Investment & Jobs Act, respectively.

In conclusion, Bremer mischaracterizes the truth when he says Bennet has only passed one bill into legislation.

During his interview with Sengenberger, Bremer decried the political ideology of Marxism and claimed it was becoming widely accepted in the U.S.

“Marxism is extremely dangerous,” Bremer told Sengenberger. “I traveled extensively in countries that were taken over by Marxist ideology, and they are a disaster, highly impoverished; their environments are a disaster. That’s where a lot of global pollution, particularly pollution that goes into the ocean, comes from the countries that adopted that that methodology.”

Blaming other countries, particularly China and developing countries like India, is a common conservative talking point from Republican leaders like Donald Trump, but has been proven to be misleading by national fact-checkers.

Bremer told Fox News that he’ll spotlight the environment in his campaign but did not explain any specific stance about it. In his radio interview Bremer specifically mentions that Marxist countries are to blame for ocean pollution.

First, there are no “Marxist” countries, there are some countries that have adopted some of Karl Marx’s ideals, but Bremer seems to conflate Marxism with authoritarianism.

Bremer could be referencing studies from 2010 and 2015 that list China, Indonesia, the Philippines, Vietnam, and Sri Lanka as the top plastic polluters in our oceans. But more recent studies have found that developed countries in the west, led by the U.S., export much of their plastic to developing countries that are closer to oceans and are large drivers to the plastic pollution output of those countries.

Furthermore, firms from the U.S. often outsource their manufacturing to other countries, contributing to carbon emissions and other pollution while shirking responsibility for them.

In any case, it has become common for American politicians to try and shift blame for global warming on to other countries rather than to accept the sizable role the U.S. has played in changing the world’s climate.

Claim: “I’ve never been a politician.”

In his campaign ad, Bremer called Bennet a “career politician,” and contrasted that with his life, which currently consists of running a consulting business in Colorado Springs and commentating part-time for NBC during the Olympics.

According to Bremer’s campaign website, Bremer was elected as chairman of the El Paso County GOP in 2011, in 2015 Bremer unsuccessfully ran for vice-chair of Colorado’s Republican Party, and last year was serving as the Senate District 10 Republican chairman and lost a bid to be Republican National Committeeman.

Bremer hasn’t been a public elected official, but he’s been involved with Colorado politics for over a decade and has been elected to political positions within the Colorado Republican Party.