Colorado has dug itself into a hole, budget-wise, and it’s time to stop digging, say progressive fiscal analysts

Not Another Second. Congress Must Act on Immigration 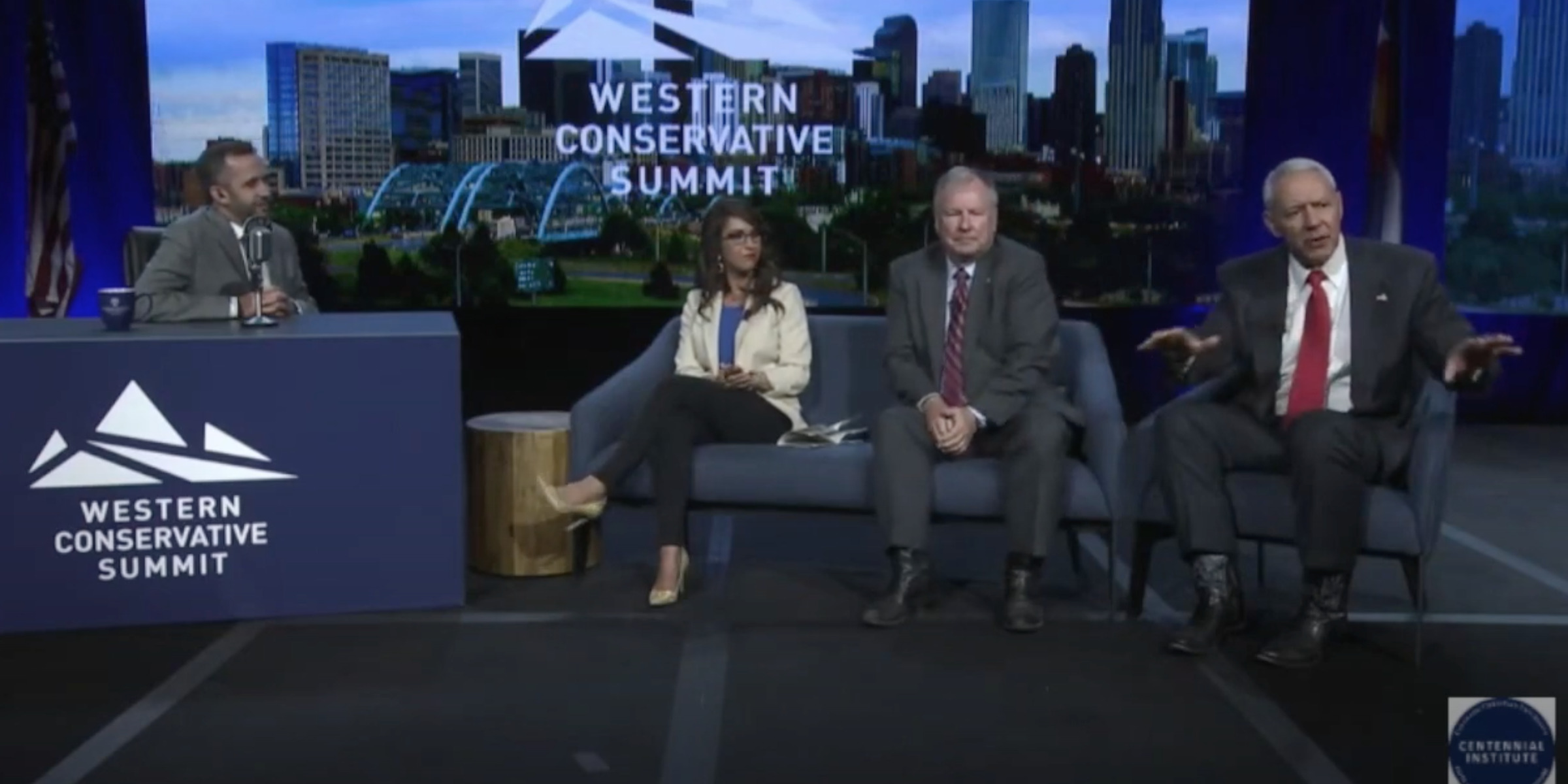 UPDATE: This article has been updated with extensive comments from Congressman Buck, who says he wasn’t linking mail-in ballots to fraud.

Speaking at the Western Conservative Summit this weekend, Congressman Ken Buck (R-CO) appeared to raise the conspiracy theory of election fraud, warning the audience that they must not let Democrats “steal elections.” Buck specifically mentioned the need for Republicans to run up a margin of votes to guard against “when their votes come in a day or two later,” seemingly a reference to mail ballots tabulated after Election Day, which President Trump and allies continue to baselessly insist were evidence of Democrats stealing elections in swing states like Georgia and Pennsylvania.

Buck, who previously convened a panel of Republican county clerks to quell disinformation about fraud in Colorado’s election process, denies invoking the same conspiracy theories that led Trump supporters to storm the U.S. Capitol as a rallying cry for Republicans to take control of the legislative body seated within that very building. He insists that his two consecutive sentences were entirely separate comments:

“I think what you’re doing is conflating something I said at the beginning of the quote with something I said at the end,” Buck told the Colorado Times Recorder. “When I talk about not nationalizing elections, it has to do with H.R. 1 and S.R.1 and making sure that we have elections that are run by state legislatures and secretaries of state and not run by the federal government, which was never intended. Frankly, I think they’re unconstitutional to change the system without a constitutional amendment. I joined the Texas lawsuit because the governor of Pennsylvania changed the rules. And the US Constitution says only the state legislature can change the rules and election. I wanted the Supreme Court to say, ‘that’s wrong. You can’t do that.’ I did not join a lawsuit and ever say that I believe that the elections in the United States were stolen.

“So the first part of the end of my statement was about nationalizing the elections. In the second part was stealing elections. Four years ago we had Democrats who were concerned about the election having been tainted by Russian influence. There was a year-long investigation that really put the country through a lot. And it was determined that there was no collusion or conspiracy between the Trump campaign and the Russians. But we investigated so that the election would be seen as a legitimate election.

“We now have a former president who is alleging that the election is stolen and certainly tainted. And we have a group of people on the right now who are very upset about how we conduct elections in this country and frankly refused to vote in the Georgia Senate elections. And so when Georgia moved to pass legislation to give a group of people the comfort of knowing that the election would be credible and honest and fairly run, there was a reaction from the left.

“We have to come together in this country and make sure that the left and the right don’t feel like an election was stolen in any way. And if that means that we do investigations and if that means that we pass more stringent standards, so be it. People have to have comfort that the elections are being run fairly. And at the same time, we can’t suppress the other side’s vote no matter what. We shouldn’t pass legislation that makes voting onerous and we shouldn’t pass legislation that allows fraud in elections. My statement about making sure that elections aren’t stolen has to do with the fear on the right about what happened in 2020. It’s not something I share. I don’t believe that the election was stolen. But that doesn’t mean that other people don’t believe it. And we have to make sure that they’re comfortable so that they do participate in our system.”

When this reporter noted that the main election fraud conspiracy about Georgia pointed to the “late surge” of Democratic ballots (which was largely due to increased use of mail-in ballots) as suspicious, Buck again insisted he wasn’t linking the two, rather simply noting that in Colorado, Republicans traditionally vote early and Democrats vote late.

“So when the Democrats surge hits from Election Day voting or even mail-in ballots counted after Election Day, we still have the lead,” Buck said. “That’s one statement. In a separate, completely different statement, that’s later in that quote is the idea of assuring people that we’re doing everything we can so that elections are free and fair.”

Asked what he would characterize as stealing an election, Buck shared examples he says he’s heard from others, clear he doesn’t believe have actually happened.

“I’m not suggesting that I adopt these positions,” said Buck. “But what I’ve heard from the base is that if illegal immigrants are voting, that’s a steal. If a mail-in ballot goes to a home and somebody else votes that ballot, that would be fraud and that would be a steal if it happened. But even if there were some fraud –and there was always some fraud in an election– it didn’t overcome the kinds of numbers that we saw here in Colorado. And so I think the result is the right result in Colorado. But there are there are many different theories of how steals can occur. I spent a day talking to clerks, reporters about these voting machines and listening to Republican clerks and recorders and was convinced that there were so many safeguards in place that the voting machines were not involved in any kind of manipulation of numbers of voter data. If there were voting machines that would be corrupted, well, then that would be a situation, but I want to make it very clear: I don’t believe that happened in Colorado. And if you talk about a nationwide steal, you’re talking about thousands of clerks and recorders or at least hundreds of clerks or recorders who would have to be involved in that and stay quiet. And I just don’t think that’s what we have in America.

“The answer is more information for the public. If they could see the work that the clerk & recorders did after the election, when they hand counted 10% of the ballots to match them up to the election machine results. If you can see the kinds of safeguards that were put in place, you would have confidence in these elections. And that’s why it’s so important that the other side says, ‘the Trump campaign colluded with the Russians,’ Let’s have an investigation, let’s let the truth come out.’ When Republicans say, ‘the voting machines were corrupted,’ let’s open up the voting machines, let’s show people what happened.

“We shouldn’t just say ‘you’re stupid,’ or ‘we’re not giving your theory any credence.’ If it reaches a point where people are so ridiculous that every time you shoot down one theory they come up with a slightly different theory, then that’s not acceptable. But in Arizona, I think they’re doing the right thing. And yet the Democrats are hooting and howling. Why is it wrong to do a deep-dive into an election so that the population in Arizona understands that it was a good, fair, accurate election? I don’t think it is wrong.”

Buck’s earlier affirmation of Colorado’s secure elections as well as his refusal to vote against certification of the presidential election results angered many of Colorado’s conservative activists. During the Dec. 4 panel discussion, both Buck and Weld County Clerk Carly Koppes (also a Republican) made it clear that could only speak to the security of Colorado’s election, not to other states. One authority figure who could speak to the national results was Attorney General Bill Barr, who three days earlier announced that Trump’s Department of Justice has found no evidence of widespread election fraud.

Reached for comment, Weld County Clerk Carly Koppes, who participated in Buck’s Colorado election security panel and who also serves as as president of the Colorado County Clerks Association, said she too did not take Buck’s statement as linking mail-in ballots and fraud.

“He mentioned having that margin, as Republicans traditionally vote early and more Democrats vote late or on Election Day,” said Koppes. “When he talks about nationalizing elections, he’s probably referring to H.R. 1 and S.B 1 [the For the People Act], which would take us back to the early ’90s. I think that’s maybe more of what he referring to as far as stealing elections.”

Western Conservative Summit made election integrity a focus of its 2021 conference. Two of the five workshops conducted immediately prior to Buck’s panel focused on the issue. Heritage Action, the Heritage Foundation’s political arm, offered “Saving Our Elections: How to advance transparent and secure election reforms.”

American Majority is pleased to announce a brand new training series on Election Integrity. This training seeks to equip individuals with the tools to be successful in defending voting rights. Topics to be covered include:
– History of Changes to Election laws
– How the Big Rig Happened in 2020 (Ballot Harvesting, Lawfare, and more)
– What you can do about it!