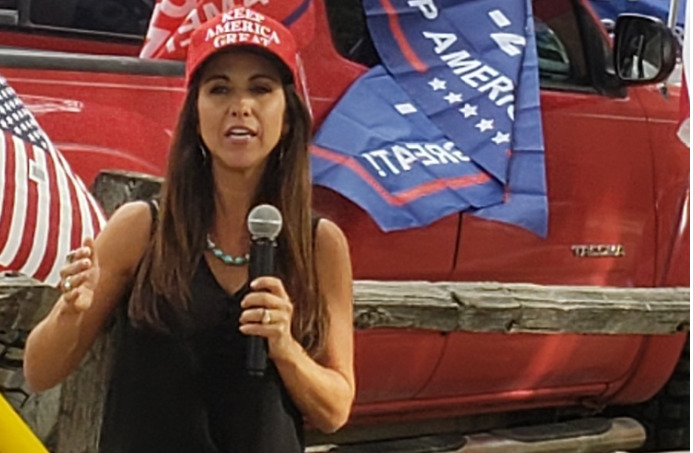 But sometime after the primary, Bishop disappeared from Boebert’s campaign.

The exact date of her departure isn’t known, but she was gone by the time ABC News aired a story in October of 2020 headlined “GOP Candidate’s Former Campaign Chief: Thank God for the Proud Boys.”

The story revealed that in September of 2019, Bishop posted a video to her “America’s Mom” Facebook page showing Bishop interviewing a man identified as a member of the Proud Boys, a far-right white nationalist organization. She closes the interview with, “Thank God for you guys and the Proud Boys.”

“Boebert’s Communications Director Laura Carno responded by saying Bishop’s views ‘were not part of Lauren Boebert’s campaign.’ In a text message to ABC News, Bishop said she was no longer with the campaign. Neither she nor Carno would say when that occurred or if it changed in reaction to this story.”

Boebert’s campaign also told ABC that Boebert has “no connection whatsoever with the Proud Boys.”

Yet Boebert still appears to embrace Bishop (literally), as you can see in this Facebook photo posted by Bishop last month:

Bishop, who also goes by America’s Mom, didn’t respond to a message seeking to know when the photo was taken and when she left Boebert’s campaign and why.

Likewise, Boebert hasn’t explained what happened to Bishop during her campaign and could not be reached for comment today. Did they really stop talking? Was Bishop fired? Did she not know everything that was going on? Are they talking now?

Bishop picked up Boebert’s campaign phone line and spoke briefly to the Colorado Times Recorder in early July. And the campaign told ABC she was managing the campaign in July. She also appeared at a July Boebert event in an unspecified role.

It’s clear that Bishop was closely involved in Boebert’s primary campaign, and still acts as if she is close with Boebert now, promoting and defending the congresswoman on social media, calling Boebert a “national hero” and writing that she is “forever changed” by Boebert’s “example of Servant Leadership.”

It’s unclear if Bishop’s far-right views, her endorsement of extremists, and her penchant for conspiracies and false information drove Boebert to seek a new campaign manager, or if something else occurred that led Bishop to change lanes.

Despite her exit from the job as campaign manager, Bishop has remained a steady influence in Boebert’s life: they appear to be close friends and spent time with each other throughout Boebert’s campaign. Bishop continually publishes supportive Facebook posts of Boebert.

Her social media is rife with attacks on the LGBTQ+ community, from accusing schools of “queer-orizing” preschool and kindergarten, to making fun of transgender individuals, to comparing a children’s drag show to the sexualization of children.

You can also spot “False Information” flags from Facebook on her posts every once in a while.

Oh, and she compares abortion to the Holocaust.

On Facebook, Bishop is often eager to defend Boebert.

After reporters raised questions about Boebert’s mileage reimbursements, Bishop attempted to provide her own testimonial on the legitimacy of the miles driven.

Bishop claims that she plans on “exposing” liberal cities in Boebert’s district which, Bishop says, are in on the mileage reimbursement allegations.

“The juicy details will leave you feeling sick,” Bishop wrote.