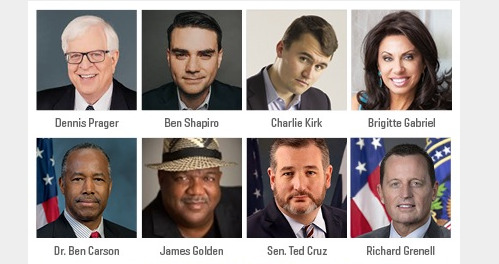 U.S. Sen. Cory Gardner (R-CO) will address a large gathering of conservative activists “via video” on Saturday, according to a spokeswoman for the event.

Normally, the Western Conservative Summit is billed as the largest gathering of conservatives outside of Washington DC and has attracted speakers ranging from Donald Trump and Donald Trump Jr. to Sarah Palin and Jeff Sessions, the former Alabama senator.

This year, the event, sponsored by Colorado Christian University, is being broadcast online, where it will be available free to those who register. It runs from 10 a.m. to 3 p.m.

The lineup of speakers and workshops has been pared down considerably from past years but still boasts some of the leading far-right conservative in the country, including Trump cabinet member and former GOP presidential candidate Ben Carson; another former GOP presidential candidate Mike Huckabee, U.S. Sen. Ted Cruz (R-TX), Texas Congressman Louie Gohmert, and Charlie Kirk, the founder of Turning Point USA, a conservative advocacy group.

Last year Gardner said at the event, “There’s no place I’d rather be than here with the largest gathering of conservatives in the Western U.S.”

Former GOP presidential candidate Herman Cain, who died of COVID this year, is featured in a film to be unveiled at the event. It’s among the last interview he conducted, according to event organizers.