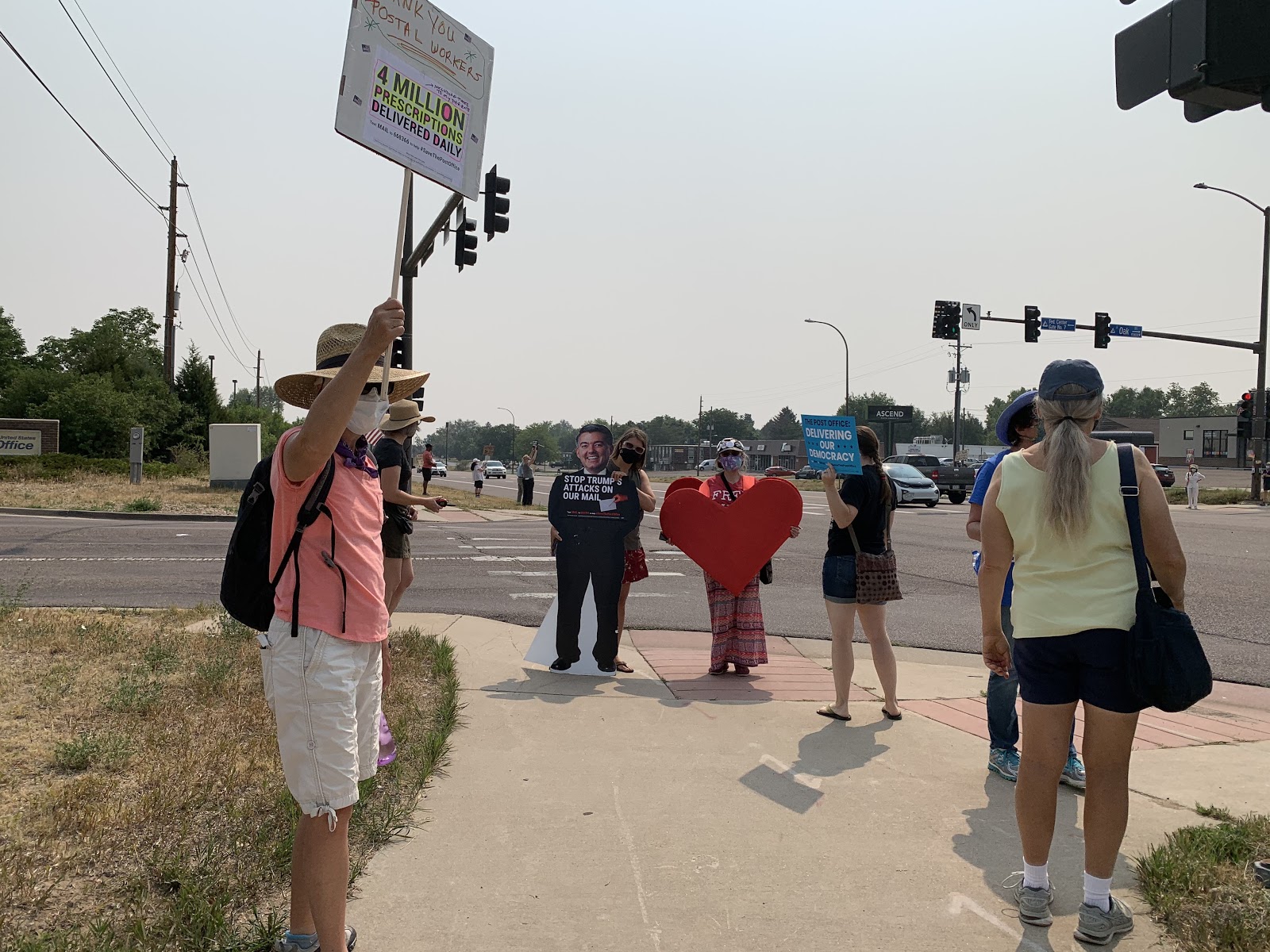 A small crowd gathered Saturday at the corners of West Alameda Avenue and Oak Street, adjacent to the Federal Center Post Office Branch in Lakewood, lining up at the intersection and holding signs with messages supporting the United States Postal Service (USPS) and many criticizing Postmaster General Louis DeJoy and President Donald Trump.

The rally was one of many happening across the nation yesterday as part of “Save the Post Office Saturday Day of Action,” a response to cutbacks at the USPS under DeJoy, a recent Trump appointee.

The event was organized by a coalition of progressive organizations including MoveOn, NAACP, and RuralOrganizing.org. In compliance with public health best-practices, events were limited to groups of 50 or fewer and held outdoors. Organizers asked that attendees wear face masks.

Passing vehicles showed their apparent support for the rally by honking, waving and giving thumbs up.

DeJoy eliminated postal worker overtime hours and removed mail sorting equipment in multiple states, delaying mail delivery. These delays have significant implications for those who depend on the postal service for essential mail and have the potential to impact vote-by-mail in the November elections.

“We’re just here to support postal workers, show our appreciation, and show that the public thinks that the post office is a valuable public service,” Sarah Nelson, an organizer of the Lakewood rally and a Jefferson County resident explained.

This sentiment was echoed by attendees who at one point chanted, “We love postal workers,” in the direction of the local branch.

“It’s a service, not a business. It shouldn’t be run like a business,” Nelson said, referencing the often unprofitable, but frequently essential, services that the USPS offers that are not offered by private competitors, including coverage of rural areas.

“We are also here to support the many people who rely on the post office including rural and indigenous people, seniors, disabled people, veterans and many more who count on the post office to deliver life-saving medications, keep a connection to their community and to deliver their ballots in November,” Nelson said as she addressed the rally.

President Trump has repeatedly criticized vote-by-mail, claiming it results in higher instances of voter fraud. The Trump administration has provided little evidence to support these claims, and the President himself used vote-by-mail earlier this year to cast his Florida primary ballot.

The President’s claims about vote-by-mail coupled with DeJoy’s mail changes left many rally attendees unsure whether ballots, which must be received by election day, would be counted this year. Given the ongoing COVID-19 pandemic, vote-by-mail is especially important since it offers a socially distant voting option.

“It’s a transparent attempt at voter suppression,” Nelson emphasized, referring to attacks on the USPS. “In the middle of the pandemic, the mail is how millions of us will deliver our democracy.”

Signs held by attendees echoed this sentiment with messages such as “Save Our Vote: Save the USPS” and “The Post Office: Delivering Our Democracy.”

Nelson called for action to protect the USPS.

“We demand full restoration of machines and personnel plus full funding for the post office,” Nelson said. “We will fight until every vote is counted. Congress must act. Postmaster General DeJoy must resign. Congress must hold him accountable and pass legislation to ensure our rights to a free and fair election with full access to voting by mail, and the success of the postal service more broadly.”

Nelson encouraged anyone planning to vote by mail to take steps to ensure their ballot will be counted.

She also encouraged using ballot drop box locations across the state, and urged those mailing in their ballot to complete and return the ballot as soon as possible after receiving it.

Colorado has offered a universal vote-by-mail option since 2014. If you are planning to vote by mail this year, you can check that your voting registration is up to date by visiting the Colorado Secretary of State’s elections and voting page.