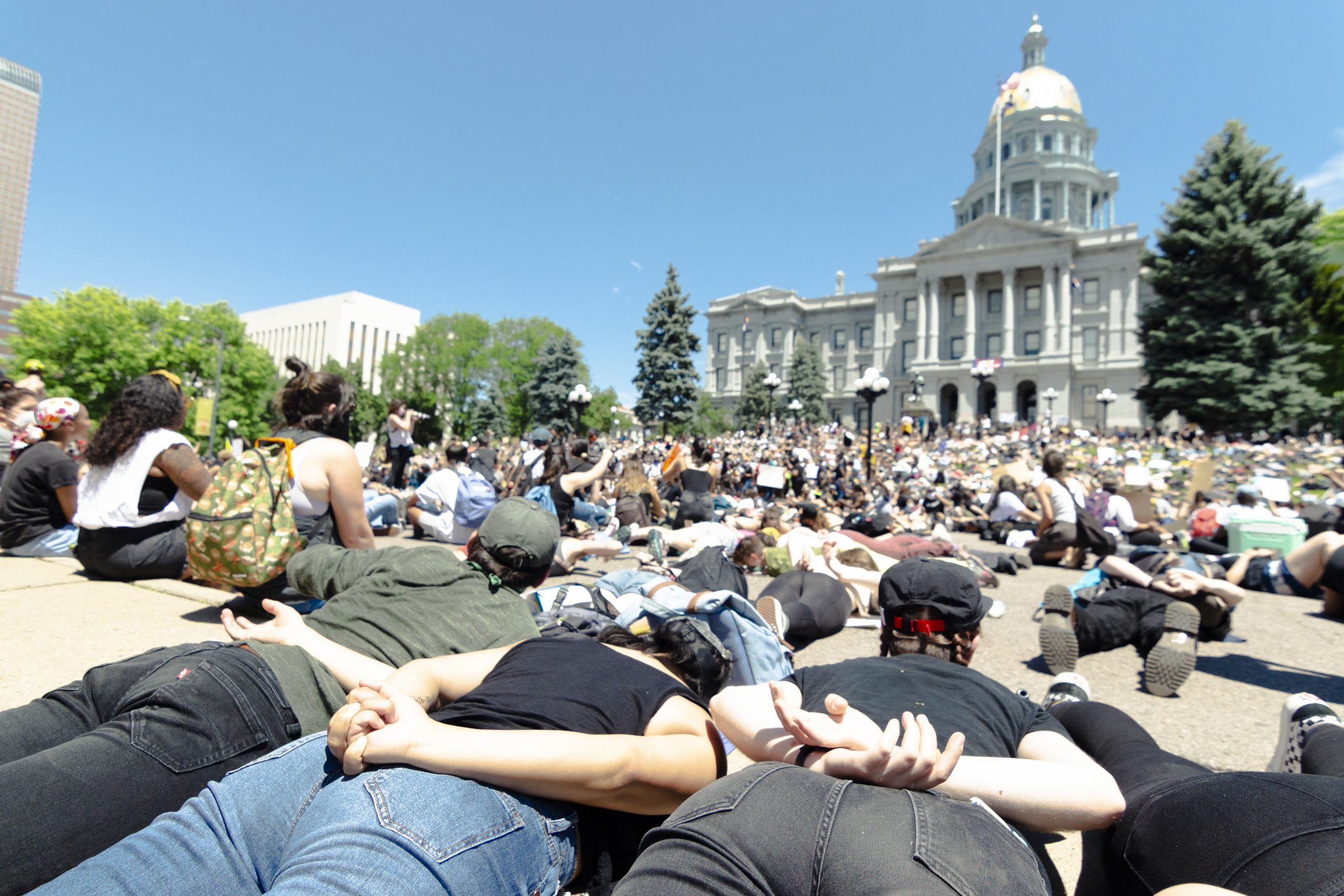 If you’ve been following news coverage of the anti-police brutality protests in the wake of George Floyd’s murder, you’ve likely seen a flood of images of tear gas, cops in riot gear, smashed windows, graffitied buildings, and other mayhem.

But what’s seemingly gotten less emphasis are images of protests before the cops arrive, which call into question whether police presence was necessary at these protests at all.

(Note: So far, I’ve only attended protests on Saturday, Monday, and Wednesday. I can only speak definitively to what I’ve personally seen, but what I’ve observed has been consistent with other firsthand accounts over the past few days.)

You’ve likely already watched this video of thousands of protesters in Denver lying face down in front of the Capitol building chanting “I can’t breathe” for nine minutes, the length of time a Minneapolis police officer had his knee on Floyd’s neck before he died.

That video has gotten over 13.6 million views on Twitter, something Larisa Grace, who co-organized Saturday’s protest and planned this particular demonstration, said makes her feel “elated.”

“I think it was a beautiful display of unity and people supporting one another, and I think it was powerful for the protesters to just be in that moment and imagine what George Floyd went through, just to have a brief glimpse of it and how brutal and inappropriate and outrageously reckless and dangerous that kind of behavior is,” she said. “We had to show that on a large scale and we felt that that was the way to do it.”

Prior to that, community organizer and Denver School Board director Tay Anderson created a speaker circle on the Capitol’s west steps, urging protesters to be peaceful that day and calling out white people who have been destroying property in the name of Black Lives Matter.

“Allies, if you see someone destroying something, I need you to check them because they’re not one of us,” Anderson said.

He also announced his plan to sever ties between the Denver Police Department and Denver Public Schools.

Anderson then passed the megaphone to state Reps. Leslie Herod and James Coleman, who told the crowd they were working on a bill to be introduced this week that would address police brutality.

“We will make it plainly clear that we demand justice, and anyone that comes into our communities and hurts our babies will be prosecuted,” Herod said.

Coleman asked everyone in the crowd to make sure they know who their state representative is and urged everyone who didn’t raise their hand to find out so they could tell their elected officials to support upcoming legislation to hold officers who brutalize their community accountable.

Then, led by a marching band, people took to the streets. They marched and chanted all around downtown, and periodically took a knee.

Monday’s protest was similarly peaceful and positive. Music played as thousands gathered at the capitol. Several people offered me water or snacks, and a couple of people were going around picking up trash.

Meanwhile, on the Capitol’s west steps, activists shared slam poetry. Organizers specifically asked young people under 18 to come to the capitol steps to address the crowd.

Responding to officials who have been asking protesters to remain peaceful and non-violent, one 17-year-old asked the crowd “Where was the peace for Eric Garner? Where was the non-violence for George Floyd? These are the questions that we’ve gotta ask our elected officials.”

Photos of those who have lost their lives to racism and police brutality were displayed on the steps, and protesters lit candles and left flowers around them.

At one point, protesters took a knee for a 9 minute moment of silence.

On Monday, I didn’t stick around long enough to see the cops show up, but as I left to go home while protesters continued to chant and dance and read poetry, I did see this: cops (or maybe the National Guard?) hanging out a few blocks away, geared up for war.

I didn’t stick around Monday because I was worried about getting tear-gassed like I did on Saturday, as you can see in this video. This was taken around 5 p.m., well before Denver’s 8 p.m. curfew. I don’t know what caused officers to start advancing and firing at this crowd of peaceful protesters. Was it the mostly empty water bottle thrown at their feet before I began filming this video?

All I know is that the safe, peaceful environment I’ve enjoyed while covering protests over the past several days shifts once the cops arrive.