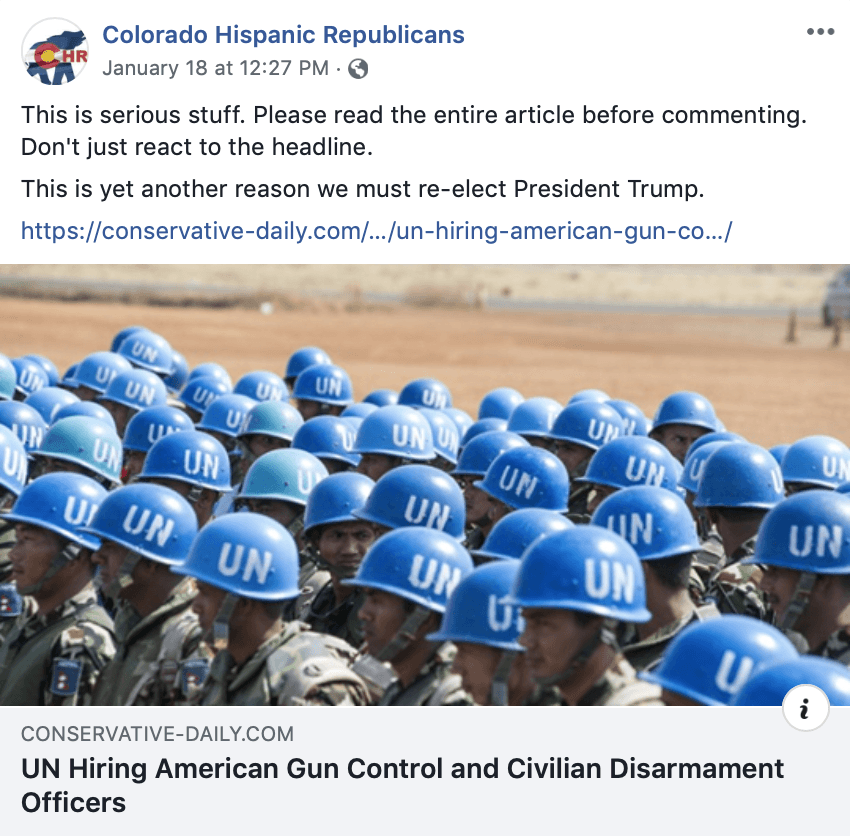 Today’s fake news problem can be found on the website of the Colorado Hispanic Republicans, which describes itself as a “center-right organization dedicated to creating a welcoming space where conservative Hispanics can share their thoughts and ideas….”

The group posted an article with the headline, “UN Hiring American Gun Control and Disarmament Officers.”

“The UN is hiring multiple ‘Disarmament Officers’ to lead the United Nations’ gun control push…. The United Nations is using your hard earned tax dollars to impose gun control onto the American people,” the article from the Conservative Daily, “Your Source for Sanity,” states.

“This is serious stuff,” stated the Colorado Hispanic Republicans in a comment introducing the article on Facebook. “Please read the entire article before commenting. Don’t just react to the headline. This is yet another reason we must re-elect President Trump.”

Here’s the deal: The United Nations is hiring disarmament officers, but they aren’t coming after your guns or engaging in gun control.

Snopes calls the claim “Fake News,” stating, “Is the United Nations office in New York recruiting paramilitary troops for disarmament and reintegration of U.S. civilians? No, that’s not true: The claim is part of a conspiracy theory that ‘globalists’ are planning a takeover of America as part of the ‘Deep State’ war against President Trump.” More from Snopes here.

Asked about the post, Hugo Chavez-Rey, the chairman of the Colorado Hispanic Republicans said, “I personally don’t give a lot of credence to Snopes. That’s a far left wing group that puts out a lot of fake news itself. We want to be accurate too. We have our own viewpoint, and we definitely don’t want to put out inaccurate stuff. We’ve taken posts down in the past when we’ve found something to be inaccurate. We’re not perfect. I appreciate your reaching out, and we will review post.”

Snopes is widely accepted by professional journalists as a fair and accurate source of fact checking.

One comment in response to the Colorado Hispanic Republicans’ fake news post on Facebook reads, “I’ve had this suspicion for a while that it would be the UN who would walk into this country for guns and creating a control type of environment.”

Confirms his suspicion? You want to believe the comment is fake, too, but you have to doubt it. That’s how propaganda works.