Two recently released studies show that expanding Medicaid, the government health insurance program for low-income people, had a bigger impact on Colorado than any other state, and that voters in the state widely support the program.

Since Colorado expanded its Medicaid program under the Affordable Care Act (ACA) in 2009, the uninsured rate for low-income adults has dropped by 29 percent, according to a report released last week by Georgetown University’s Center for Children and Families and University of North Carolina’s NC Rural Health Project.

That’s the largest decline in the percentage of uninsured adults out of any state that expanded the program.

The report also found that the expansion was particularly helpful for Coloradans living in small towns and rural areas, and that higher coverage rates help maintain the availability of health care providers in those areas, where shortages are common.

And, as more Coloradans have become eligible for Medicaid coverage, public support for the program appears to be strong.

According to another study released this week by the health care advocacy organization Healthier Colorado, 75 percent of Colorado voters would support a policy that allows people to buy into the state Medicaid program when no low-cost options are available. Of the respondents who self-identified as conservatives, 65 percent said they’d support the policy.

This information could be hugely relevant going into an election where issues surrounding health care are likely to take a front seat.

“We see a lot of division in politics today, but when it comes to health issues, Republicans, Democrats and unaffiliated voters in Colorado are uniquely united,” said Healthier Colorado executive director Jake Williams in a press release. “No matter who wins the race for governor or which party controls the Colorado House or Senate, Colorado voters of all political stripes clearly agree that we should make progress on health policy.”

Walker Stapleton, the Republican vying to be Colorado’s next governor, told the Colorado Independent at the outset of his campaign that shrinking Medicaid expansion would be one of the most far-reaching changes he’d make as governor.

Since then, it’s been hard to pin down Stapleton’s plans for Colorado’s health care system.

Colorado Public Radio’s Ryan Warner tried to get to the bottom of Stapleton’s stance on Medicaid expansion during an interview Monday, asking the candidate how he’d make good on his promise to “reign in the costs” of government programs like Medicaid without kicking people off their insurance plans. Stapleton didn’t give Warner a clear answer.

Here’s a transcript of the exchange: 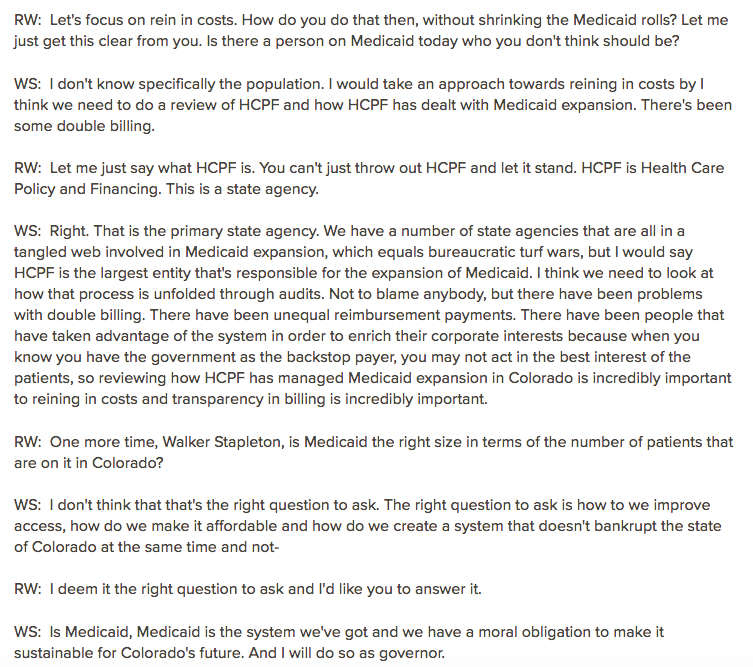 Stapleton also plans to dismantle Colorado’s health care exchange, a move that could cause over 200,000 Coloradans who have gained access through the Affordable Care Act to lose coverage.

Democratic candidate Jared Polis, however, has called for universal health care, and criticized his opponent’s stance on Medicaid in an interview with Westword’s Nora Olabi.

“There are over 400,000 Coloradans who have health care coverage because of the Medicaid expansion,” Polis told Olabi. “When Walker Stapleton says he will eliminate the expansion, that would literally throw 400,000 Coloradans off of their health care with no replacement because largely they are middle-income, low-income people who can’t afford health care in the commercial marketplace. That’s the opposite of the direction we want to go.”