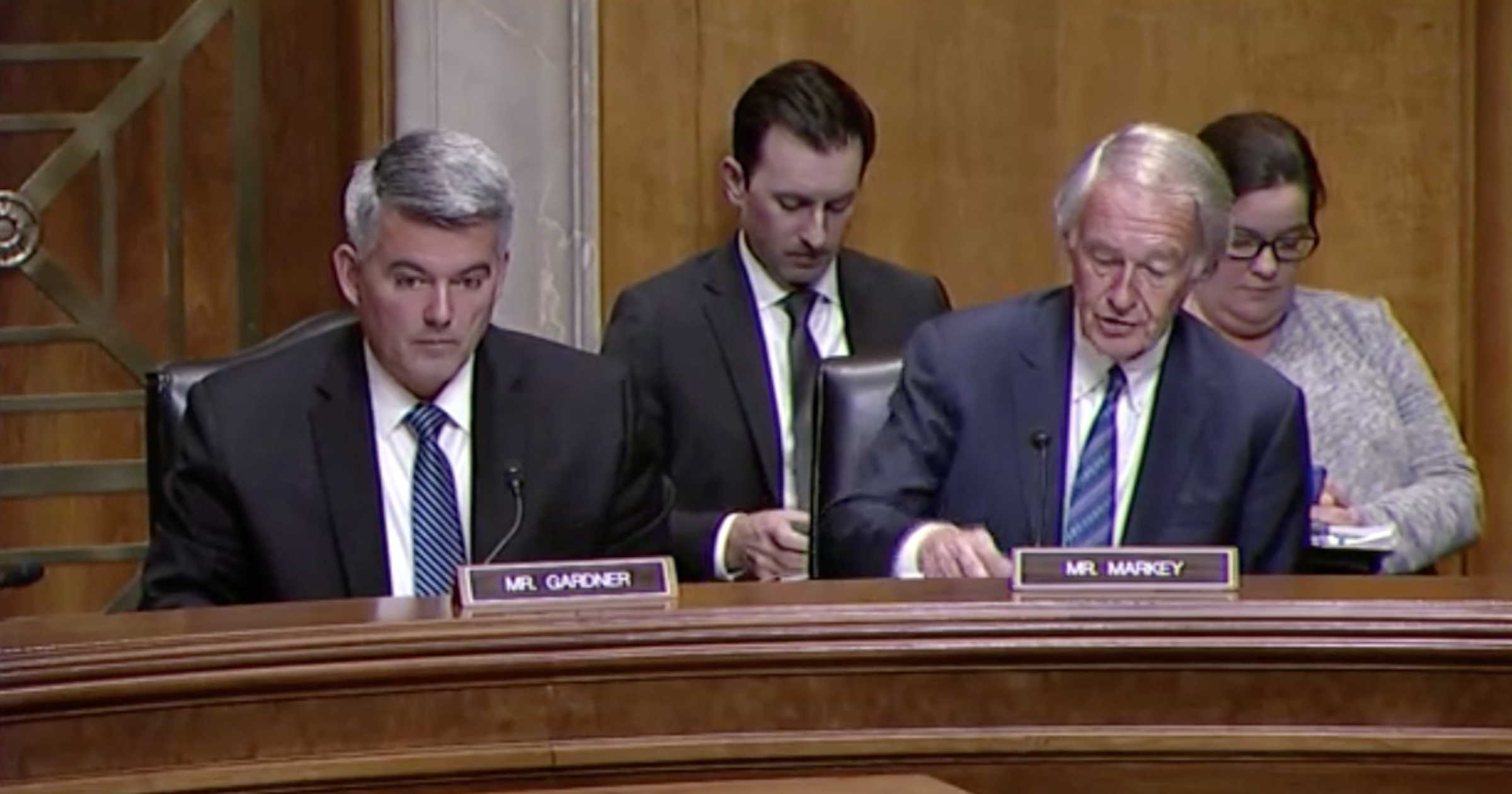 Over the past week, Sen. Cory Gardner (R-CO) has received an avalanche of bad press for his refusal to criticize President Trump over Ukraine. Wednesday afternoon, as Gardner chaired a hearing of the Senate Foreign Relations’ East Asia subcommittee, the issue came up again, but this time, it was from a friend: Sen. Ed Markey (D-MA).

In his introductory remarks, Markey, the ranking Democrat on the committee, began by thanking his colleague for his work on the bill that bears both their names, the Gardner-Markey Asia Reassurance Investment Act (ARIA). He then proceeded to show his friend what it means to stand up to a president who doesn’t respect the rule of law.

This being the United States Senate, Markey was unfailingly polite. He didn’t speak about Gardner, rather, he made his point by speaking to the committee chair sitting next to him, stating in plain language why Trump’s pressuring of Ukraine is unacceptable and flat-out dangerous.

Last Thursday Gardner repeatedly refused to answer reporters’ direct questions on whether it is appropriate for the president to ask a foreign leader to investigate a political rival. Fox 31’s Joe St. George’s video of the exchange has well over two million views on Twitter.

The subsequent news coverage was relentless and unforgiving, with CNN, MSNBC, the Hill, and other weighing in on the political quandry faced by vulnerable Republicans when asked to call out the president’s misdeeds.

The hearing was the third in a series of updates on ARIA. While Gardner’s remarks focused on the threat of China as seen through the lens of Hong Kong protests, Markey used his time to consider the role of the United States as a global leader.

Addressing Gardner directly, Markey emphasized the importance of the rule of law and sovereignty of nations He pressed upon the need for America to model these values to Asia and the world. He raised the dangers inherent in failing to do so.

And then the senator from Massachusetts did what his friend and colleague from Colorado so famously refused to do: he expressed his shock and disappointment at President Trump’s attempts to pressure the Ukraine to interfere in U.S. elections.

Mr. Chairman, I also want to thank you for your partnership on this subcommittee and your work on helping to pass the Asia Reassurance Initiative Act into law. You were just speaking about it.

Our primary goal with that bill was to show that there is broad congressional support for our robust Asia policy, to show that developments in the Indo-Pacific have outsized importance for the future of the United States, to show that we as a nation oppose coercion and that we respect the sovereignty of countries, that we recognize the importance of strong alliances and partnerships across the region, that we simultaneously recognize that crucial as it may be, we have to actually show that peoples across the Indo-Pacific should enjoy fundamental rights and freedoms to which they are entitled, and to state unequivocally that it is the role of the United States to assert leadership in those roles. Because if we don’t advocate for these ideals, they won’t take hold on their own.

After all, we are witnessing a resurgence of authoritarian governments around the region. We see countries like China and North Korea advancing their respective weapons programs. We are concerned about violent extremism in Southeast Asia and the potential for ISIS fighters to return to the region from Syria. And we see challenges to the global rules-based order that has helped maintain peace and stability for decades.

At the same time, we must resource a host of programs and initiatives that will move American Asia policy in the right direction. Failure to do so will undermine the norms, interest and values we want to perpetuate.

Which is why I was shocked and disappointed to learn that President Trump abused the power of his office to urge the government of Ukraine to insert itself into our democratic process. And I was shocked and disappointed to hear President Trump tell reporters at the White House that he wants the Chinese government to influence the election in his favor. This invitation for a foreign government to interfere in the American electoral process not only violates the oath of office of the president of the United States, but it also undermines the very values for which this country stands.

It is concerning enough that a sitting president would invite interference from any foreign entity. But it is especially troubling when the request is made of a government activity undermining freedoms and rights around the world.

It is plausible that President Xi interpreted this request as an opening to further threaten fundamental freedoms of expression, assembly and the press, whether in Tubek [Tajikistan], in Hong Kong, or any other place beyond.

And such a signal could have significant implications for the implementation of U.S. policy in Asia. It could undermine the objectives our professional diplomats, officials and service members are working hard to achieve.

We have an obligation to push back against those Chinese government policies that are inimicable to our interests and our values. We must advocate for the Uyghurs facing repression and imprisonment. We must also support the tenants of freedom in Hong Kong, and we must promote the freedom of navigation in the East and South China seas, as we do all over the world.

So let me be clear. Pushing back on China cannot be the rationale for everything the United States does in Asia. What makes diplomacy so difficult and so important is being able to deftly balance priorities. Pursuing stronger alliances and partnerships and promoting human rights and democracy are not mutually exclusive. In fact, they are mutually reinforcing.

We must think of the long-term effects of abandoning our principles. So I thank you, Mr. Chairman, and I look forward to exploring with our witnesses how they are helping their respective departments push American Asian policy forward in the face of mounting challenges.