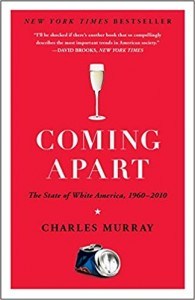 Murray, who now works for the ultra-conservative American Enterprise Institute, will talk about his 2012 book, Coming Apart, which Brigham Young University Professor Brad Cox called, a “sobering portrait of a nation where millions of people are losing touch with the founding virtues that have long lent American lives purpose, direction, and happiness,” according to a news release from the CCU’s Centennial Institute.

Murray’s book, the Bell Curve, coauthored with the late Richard J. Herrnstein, linked race to intelligence, drawing protests since it was published in 1994. Specifically, it argued that genetic differences partially explain why African-Americans are less intelligent than white Americans.