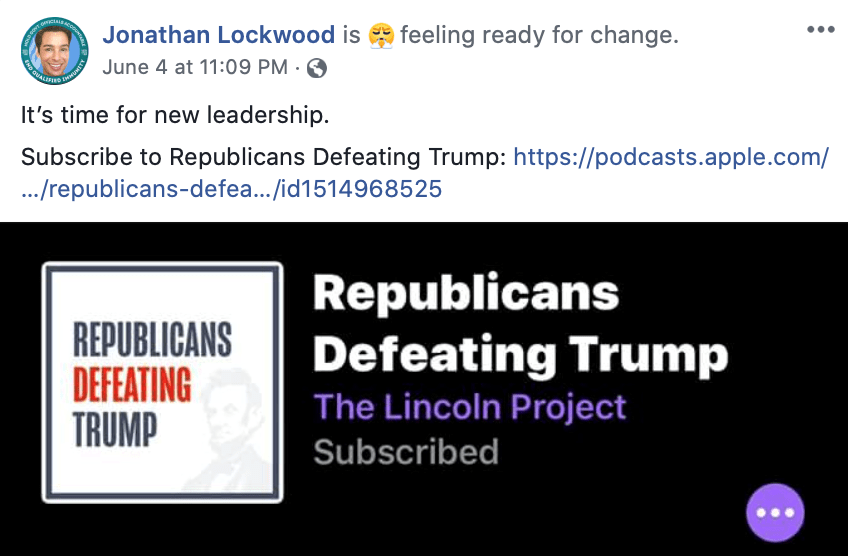 A conservative activist, once regarded in Colorado as a partisan Republican, is now saying Trump has “failed in even the simplest of pursuits in his role,” and wants the president defeated in November.

Jonathan Lockwood, who worked for former U.S. Rep. Mike Coffman (R-CO), has aligned himself with the Lincoln Project, a Republican-lead organization working to defeat Trump.

“The president has failed to elevate our collective consciousness, and he has failed in even the simplest of pursuits in his role,” said Lockwood when asked why he’s turned against the president. “The antics are not just campaign tactics, they are character flaws. The cover-ups and insidious events are alarming.”

Lockwood insists he wants Democrats and Republicans to come together to solve problems.

‪“America is in crisis,” he wrote in a statement to the Colorado Times Recorder. “We need leaders on both sides of the aisle to stand up to profligate personalities occupying positions of power. I will continue to speak out on division and lawlessness, and advocate for policies that advance a fairer and freer society. My purpose is to manifest a new world—one not imprisoned by chaos and revolution, but evolution and order.

“Our future is at stake, we must fight not only for survival, but for thrival. Imagine a world without war, poverty and suffering—even just for a moment—we need leaders to capture that spark, the imagination of our nation, and aspire for better by appealing to the best in all of us, not the worst humanity has to offer. On this side of the looking glass we find ourselves in the year 2020, it seems as though nothing is as it was, and that nothing will be as we were promised.

Those may not sound like words you’d expect from a former spokesperson for Colorado House Republicans and Oregon House and Senate Republicans or from someone who concocted a nuclear-bomb-themed attack advertisement targeting Democratic Sen. Michael Bennet, but Lockwood is seriously disappointed by Trump.

“I voted for the president because the stakes were high, and the partisan warfare was real,” he wrote. “I took him at his word that he would be fiscally conservative, but he has delivered a fiscally irresponsible administration. He’s advanced the Pelosi spending agenda. He promised a smarter foreign policy and he has delivered a more vulnerable America due to his nefarious volatility.”

Lockwood was among the leaders of campaigns to recall Colorado Democrats for passing gun control laws. And suggested that GOP candidate Casper Stockham, who’s currently running for Congress in the Seventh Congressional District, run for office initially.

He directed Advancing Colorado, a now-defunct conservative multi-issue advocacy group in Colorado and was a fellow both for the Charles Koch Institute and legislative fellow with American Legislative Exchange Council

“It is not too late though, and while I don’t expect people on the other side of the aisle to be waving and holding open arms — we need to seriously come together and unite for humanity,” Lockwood wrote.

CORRECTION: Lockwood did not work for Stockham as initially stated in this article.