Colorado Bill To Make Abortion A Felony Fails Once Again 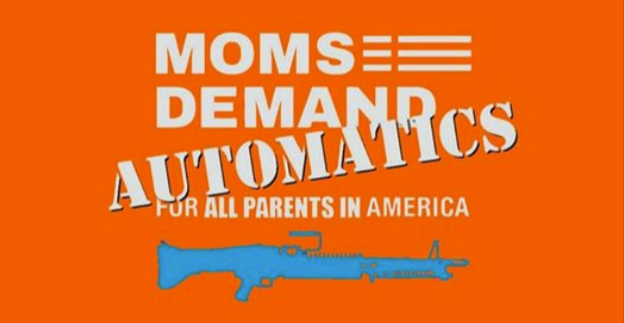 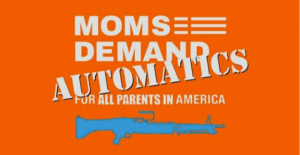 But the Democrats’ legislative majority isn’t stopping pro-gun groups from preparing to fight.

A pro-gun group called Moms Demand Automatics is trying to get attention by organizing a counter-protest during Denver’s Jan. 19 Women’s March, according to the group’s Facebook page, which includes likes from Republican State House Minority Leader Patrick Neville of Castle Rock. About 100 people are interested or going to the rally, like former Republican House candidate Grady Nouis.

Another pro-gun gun entity, Rally for Our Rights, is raising money for billboards in Colorado and planning workshops on the legislative process.

One of Rally for Our Rights’ three proposed billboards calls it hypocrisy to support women’s rights and also to advocate for gun-safety legislation. The  billboard would state:

Politicians Who Claim to Support Women’s Rights Want to Take Away A Woman’s Right To Defend Herself with a Firearm. Why? RallyforOurRights.com 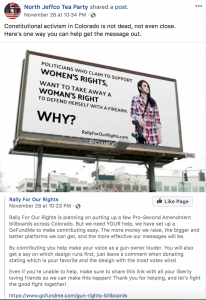 The group wants the billboards as part of a campaign to fight expected gun-control legislation.

“Colorado is going to be ground zero for gun control legislation after Democrats swept all three branches of state government on election day,” state’s the group’s GoFundMe page, which indicates that about $1,000 has been raised toward a $15,000 goal.

In addition to the billboard campaign, Rally for Our Rights plans to hold three free activist workshops in Colorado, including one at the offices of the Independence Institute, a libertarian entity most often aligned with Republicans.  The workshops, which will be scheduled later, are titled, “How to Be a Better Second Amendment Activist.”

The training includes information on the legislative and the electoral processes, as well as a “quick overview of the recall process.”

Rally for Our Rights is being promoted by longtime Tea Party activist Lesley Hollywood, who founded the group but did not respond to requests for comment. Hollywood recently appeared on NRA spokeswoman Dana Loesch’s “NRATV” program.

It’s not clear who’s behind Moms Demand Automatics, which has nearly 10,000 Facebook followers, but the organization’s swag, including cups and “toddler zip-up hoodies,” is being sold on the Rally for Our Rights online shop.

Mom’s Demand Automatics is apparently intended to mock a national gun-safety group called Mom’s Demand Action, which describes itself as a “campaigns for new and stronger solutions to lax gun laws and loopholes that jeopardize the safety of our families.”

The Facebook page of Mom’s Demand Automatics includes photos of women shooting guns in bikinis as well as a video of a women’s buttocks shifting after she fires an automatic weapon.

This video of the woman led one commenter to write, “Why does this make me think moms aren’t really running this page? lol,” and another to counter with, “Why do you assume a female can’t appreciate the female form?”

The fact that Rally for Our Rights is planning to review Colorado’s recall rules at its trainings is significant, because pro-gun advocates waged successful recall campaigns after Democrats passed modest gun-safety laws in 2013. Two Democratic state senators lost their seats in 2015 and a third resigned. Hollywood led the “We Care 4 Weld County” group that attempted to recall Weld County Commissioner Barbara Kirkmeyer back in August. Hollywood’s group failed to gather the 5,767 signatures needed to place a recall initiative on the ballot.

Colorado’s 2013 laws require background checks prior to all private and online gun sales in the state and allowed a gun’s bullet holder, called a magazine, to hold no more than 15 bullets.

But this year, gun control measures have high approval ratings in Colorado in the wake of repeated mass shootings.

Democrats who avoided talking about gun control on the campaign trail in the past proactively promoted the issue in the last election and vilified the National Rifle Association as blocking modest efforts to save lives.

In fact, the NRA’s presence in Colorado was seen as counter-productive to Republican candidates backed by the organization.

And similar questions could be raised about Republican groups that auctioned or raffled off AR-15 rifles this year.

Democrat Jason Crow backed a ban on assault-style weapons in his successful campaign against U.S. Rep. Mike Coffman of Aurora.

Gun-safety advocates are reportedly prioritizing two bills in the upcoming legislative session. A “red flag” law would allow police to take guns from people deemed by a judge to pose a significant risk to themselves or others.

A second bill would deny guns to people convicted of violent misdemeanors.

Most Republicans oppose such bills due to fears that they would lead to the confiscation of guns in unintended ways. Or because they oppose all restrictions on guns.

Earlier this year, Republicans in Colorado’s state senate blocked a red flag bill that had cleared the house with bipartisan support.