If You Want a Semi-Automatic AR-15, Maybe You Should Start Going to Republican Fundraisers in Colorado 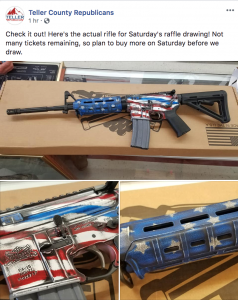 If you want to start amassing guns, you might consider attending Republican Party fundraisers in Colorado.

To get your own military-style semi-automatic AR-15 rifle this weekend, you’d have to be lucky (or unlucky if you hate guns), because it’s the grand prize in a Saturday raffle for the Teller County Republican Party.

In May, you could have gotten one at a GOP fundraiser in Colorado Springs.

The AR-15 is the firearm used at the mass killings of students in Florida this year and Sandy Hook in 2012. it was used in the Las Vegas massacre in 2017 and San Bernadino in 2015. And, unfortunately, elsewhere.

Does that bother the organizers of the raffle?

“Absolutely not,” said Erik Stone, the elected chair of the Teller County Republican Party, told the Colorado Times Recorder. “Individual people are responsible for individual acts. Guns are inanimate objects. They are tools. They can be used the same as a car, a knife, a sword, as we saw in Kansas City. There are many weapons people can use with evil intent. And I have no problems with our raffle.”

Stone said the winner of the raffle will have to pass a background check before receiving his or her grand prize.

“If they cannot pass a background check, they will receive a cash prize in lieu of the firearm,” said Stone, adding that he is not only a gun-rights advocate but also an NRA certified instructor who recently taught a free concealed-carry class for teachers and first responders. “Everything will be done completely legally.”

At a GOP fundraiser in May, your chance to win an AR-15 would probably have been more pricey. Instead of being raffled off, the weapon was the first of six “live auction items” at the El Paso County Republican Party’s annual fundraiser at the Antlers Hotel in downtown Colorado Springs.

The estimated value of the AR-15 for this weekend’s raffle is $1,500. The second prize in the raffle is 10 one-once Liberty Silver Dollars, with a retail value of $200. Money goes to Republican efforts in Teller County, located outside of Colorado Springs.

Stone said the AR-15 has multiple uses. It is America’s number one gun choice for killing varmints, he said, which is the same point made in March by U.S. Rep. Ken Buck (R-CO) when he said farmers and ranchers in his district use the AR-15 to shoot “pests, raccoons, or foxes or other smaller animals that are trying get into their chickens or disrupt their operations.”

Gun-safety advocates say you don’t need a semi-automatic weapon to kill raccoons or other farm pests. It’s essentially a military weapon, designed for rapid-fire killing, not hunting or other civilian use, they say.