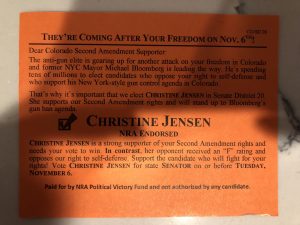 After a string of bloody shootings that have shaken America, the National Rifle Association (NRA) is mailing advertisements to Colorado voters touting its endorsement of Christine Jensen, a Wheat Ridge Republican running for state senate.

“THEY’RE COMING AFTER YOUR FREEDOM ON NOV. 6TH,” states the mailer from the NRA. “The anti-gun elite is gearing up for another attack on your freedom in Colorado and former NYC Mayor Michael Bloomberg is leading the way… That’s why it’s important that we elect CHRISTINE JENSEN in Senate District 20. She supports our Second Amendment rights and will stand up to Bloomberg’s gun ban agenda.”

“If I were their political strategist, I don’t think I would have sent it,” said John Straayer, Professor of Political Science Emeritus at Colorado State University, when asked about the NRA’s mailer. “And I certainly wouldn’t have done it after the [synagogue] shooting in Pittsburgh–though it may have been printed up and in the system before the shooting.”

Straayer said the campaign ad was likely mailed to a very narrow list of NRA members or voters, with the intention of pushing them to vote.

If so, he said, the mailer “might have a marginal impact, although that kind of a list probably contains the names of people who will vote anyway.”

“If it gets spread out very far, beyond a narrowly targeted list of fellow tribe members, I think it’s likely to have a negative effect.”

The NRA is promoting its endorsement on orange cards that arrived in mailboxes as recently as yesterday.

The mailings in support of Jensen were sponsored by the NRA Political Victory Fund, which aims to “promote and strive for the improvement of government by encouraging  and stimulating NRA members and other citizens who believe in the preservation of firearms rights to take a more active and effective role in government affairs through the electoral process,” according to information the group supplied to the secretary of state.

Mary Rose Adkins, the registered agent for the NRA Political Victory Fund, did not return a call asking if the group thinks the recent mass shootings will cause its advertisement to backfire–and for a general comment about the mailer.

The NRA organization also mailed advertisements in support of Republican state senate candidate Beth Martinez Humenik of Adams County, whom the NRA also endorsed with a “A” rating in her race against Democrat Faith Winter.

Progressive groups, like Everytown for Gun Safety, which backs gun-safety laws, are campaigning in Colorado this year, spending $650,000 on candidates who are allied with them.

“The politics on this issue have shifted dramatically in favor of gun safety — and nowhere is that more true than in Colorado,” Everytown for Gun Safety President John Feinblatt told The Denver Post last month. “We are proud to support candidates up and down the ballot who will put public safety ahead of gun lobby priorities.”

The stakes are high because the outcome of the state senate races could shift the balance of power in Colorado, which could put new gun laws on books.

If Republicans lose their one-seat majority in the state senate, and Democrats hold the governor’s office and state house as expected, then gun safety legislation will likely become law in Colorado, according to political observers, who note that gun-safety legislation has wider appeal than it has in the past.

The Republican-controlled state senate killed  legislation this year that would have allowed law enforcement officials to seize guns from citizens deemed mentally ill or otherwise dangerous by the courts. The proposed law, called “Red Flag” legislation, cleared the state house, which is controlled by Democrats, with bipartisan support.

Conservatives, however, worry that the ultimate aim of Red Flag and other gun control legislation is to confiscate firearms from all people who own them, not just people shown to be “dangerous” or for public safety, and to ban guns completely in Colorado.