by
Madeleine Schmidt
posted on
October 15, 2018

Republican state senate candidate Tony Sanchez’s views on reproductive health could prove to be too far-right for a district with more registered Democrats than Republicans.

The senate seat that’s currently held by term-limited Democrat Andy Kerr is one of the most hotly contested in the state legislature ahead of the Nov. 6 election. In 2014, Kerr defeated Sanchez in the race to represent Senate District 22, which encompasses Lakewood and parts of Jefferson County, by a slim margin of 1,336 votes. 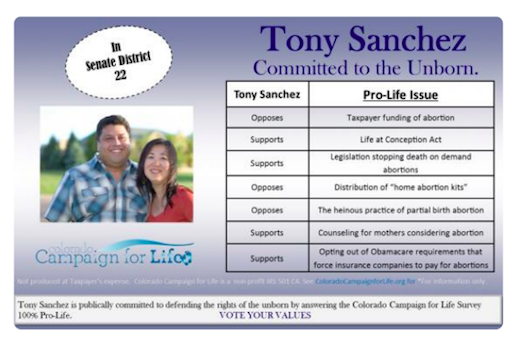 Sanchez received a “100 percent pro-life” score from the anti-abortion advocacy group Colorado Right to Life during his first Senate run.

One reason for his perfect score was his support for the federal Life at Conception Act, which aimed to give legal rights to fertilized eggs, also called zygotes. This policy is often referred to as “fetal personhood,” and it translates to making all abortions illegal and throwing the doctors who perform them, and sometimes women who have abortions, in prison.

As far as views on abortion go, Sanchez’s are about as far-right as can be.

Sanchez has also been vocal in his opposition to the Affordable Care Act’s birth control mandate, which required insurers and employers to provide coverage for contraceptives at no cost to patients in their health insurance plans.

In a string of Facebook posts from 2012, Sanchez criticized the mandate and shared articles claiming it amounted to a “war on religion” and was unconstitutional.

President Trump weakened the birth control mandate around a year ago by allowing a wide range of employers and insurers to claim moral or religious exemptions to the law.

Sanchez is up against Democratic State Rep. Brittany Pettersen of Lakewood, who has been instrumental in increasing access to birth control for Coloradans.

During her time as a lawmaker, Pettersen championed a rare piece of proactive reproductive health legislation that passed in spite of Colorado’s Republican-controlled state senate. The law requires insurers to allow women to stock up on a year’s supply of birth control at once, rather than forcing them to make monthly trips to their pharmacy.

This makes getting birth control easier for women who travel often, have irregular work hours, or live in rural areas, and some research shows the law could cut unintended pregnancies by a third.