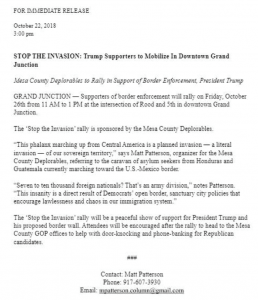 Right-wing radio hosts and Trump-supporting groups in Colorado are trying to stoke up anger at the refugees heading toward the United States in search of a better life–and political asylum.

One news release for a “STOP THE INVASION” rally by Trump supporters in Grand Junction Friday, sponsored by the “Mesa County Deplorables,” stated:

“The phalanx marching up from Central America is a planned invasion–a liberal invasion–of our sovereign territory.”

On KNUS 710-AM Peter Boyles was in full-froth mode, telling his listeners yesterday during hour four:

“There is a method to this madness, and this is my personal belief. They want a bloody confrontation, thinking it will hurt Trump. They, meaning progressives, libs, crazies, media, all of them. They want a showdown on the border. And my guarantee is that the ANTIFA people will show up, the open-borders idiots will show, the progressives will show… And there will be a battle for that border! And if Trump puts GIs on that border, you are really going to run a lot of risks, but it’s gonna happen. It’s gonna get nasty. And this is being funded from the outside. Don’t kid yourself that this isn’t concerted. It’s being done for and by purpose.”

Boyles screamed even louder today, claiming jihadists were part of the refugee caravan.

In the credible world, as opposed to the unreality occupied by Boyles, there’s no evidence for the conspiracy theory that progressives planned the caravan and jihadists are part of it.

But Boyles, who was once seen as a serious media figure, has apparently put audience fomentation above civic decency.

In 2016, for example, the Colorado Times Recorder reported that Boyles, had this conversation with an on-air guest:

GUEST: There’s a real incompatibility between Islam and Western-style government democracy. There just is.

GUEST: They don’t work together. This incompatibility is not extremist. It is intrinsic to Islam.