CO Election Official to Conspiracist Legislator Hanks: “Misinformation” Has Led to “Serious Threats” in “Your Own District”

If a Supreme Court Seat Opened, Would Gardner Argue for Delay, As He Did Four Years Ago? 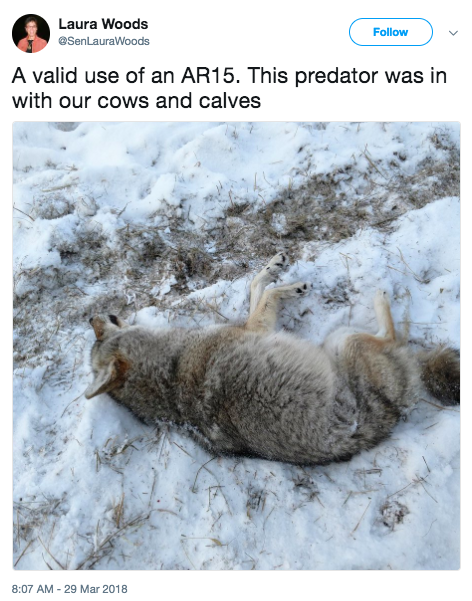 After 17 were killed in a Florida school shooting with an AR-15 rifle, U.S. Rep. Ken Buck (R-CO) took to the radio airwaves to defend the military-style semi-automatic firearm, saying “the AR-15 is a gun that is used in my district by farmers and ranchers to shoot pests, raccoons, or foxes or other smaller animals that are trying get into their chickens or disrupt their operations.”

Former State Sen. Laura Woods of Arvada made the same point last week in a tweet with a photo of what appeared to be a dead Coyote.

“A valid use of an AR15,” tweeted Woods, a Republican. “This predator was in with our cows and calves.”

Woods, who was narrowly defeated in 2016 by Democratic State Sen. Rachel Zenzinger, is now a farmer in northern Colorado.

The former state senator did not return a call requesting that she refute the argument, made by gun-safety advocates, that you don’t need an AR-15 to kill a coyote.

“Get out of BubbleWorld sometime and familiarize yourself with the real world – where ARs & similar firearms have plenty of legitimate uses. Nice shootin’ @SenLauraWoods,” tweeted Paige.

Support for the AR-15 appears to run deep in rural GOP circles in Colorado.

Last week, Republicans in the southwestern town of Dolores raffled off an AR-15 as a fundraiser for local GOP candidates.