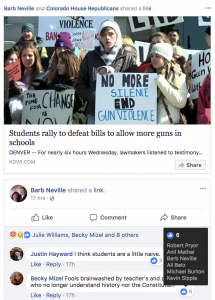 Becky Mizel, former chair of the Pueblo County Republican Party, took to Facebook recently to comment on an article about students rallying to defeat bills that would allow more guns in schools.

“Fools brainwashed by teachers and parents who no longer understand history nor the Constitution.”

Is there chaos in this White House, and does it affect how business — what you folks are doing there on the ground?

In a lighthearted response, Gardner denied the characterization of “chaos,” preferring to frame the churn at the executive branch as “up-tempo,” and said he believes this White House to be “very, very intense.”

I think everybody would recognize that there’s a significant up-tempo at the White House, whether it’s the pace of actions, the face of Twitter — you name it! — at the White House. And so, I do think that this is just a very, very intense White House. I don’t think there’s chaos in the White House, as some would like to spread. In fact, I think you can just see the  — what’s happening in North Korea — the fact these sanctions are working. The Maximum Pressure Doctrine has worked — in a year!– far more than eight years of Strategic Patience ever worked. And so, I think that’s just something that a lot of naysayers would like to believe.

Listen to the entire interview below 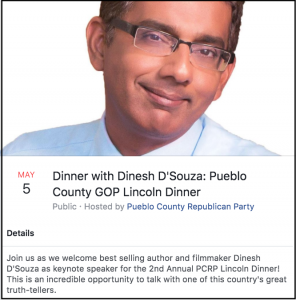 It’s the start of fundraising season, which for local Republican parties means it’s time to promote the big-name speakers for their annual Lincoln Day Dinners. Earlier this week, Media Matters noticed one particularly troubling name appearing all over the country:

“Republican Party groups are continuing to partner with right-wing troll Dinesh D’Souza for fundraising. D’Souza has mocked the survivors of the mass shooting in Parkland, FL, claimed that Rosa Parks was an ‘overrated Democrat,’ and written that slavery wasn’t ‘a racist institution’ and ‘the American slave was treated like property, which is to say, pretty well.'”

Not to be left out, Colorado’s own Pueblo County Republican Party announced D’Souza will headline their May 5 fundraiser:

“Join us as we welcome best selling author and filmmaker Dinesh D’Souza as keynote speaker for the 2nd Annual PCRP Lincoln Dinner! This is an incredible opportunity to talk with one of this country’s great truth-tellers.”

It’s unclear whether Pueblo Republicans consider D’Souza “one of the country’s great truth-tellers” in spite of his blatantly racist statements, or because of them. It’s worth noting, however, that their state representative Judy Reyher was forced to apologize for making similarly racist Facebook posts.

Michael Lund and Erik Maulbetsch contributed to this post.