A Colorado lawmaker says she can “no longer be silent” about “so many good young people” who “can’t even see reason” and “don’t understand” what they are marching about.

State Rep. Judy Reyher (R-Swink) made the comments on Facebook, where she wondered why protesters aren’t concerned about scissors, forks, steak knives, keys, and the “spike heel on shoes.”

“And every one of those items can cause bodily harm or death,” wrote Reyher. “The spike heel on shoes can cause death if used as a weapon. Yet none of these items are in danger of being banned from use.”

Last week, Reyher shared a Facebook post stating that if the students who are “walking out of school to protest gun violence” would stop bullying “their peers to the point of mental breakdown in the first place, this wouldn’t be an issue.” 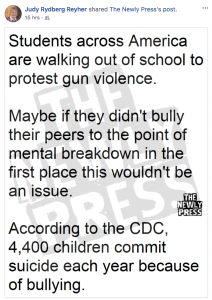 Reyher’s comments on Facebook (African Americans are “hatred-filled beings”) and to The Denver Post (Black people “hate white people with a passion”) generated national media attention last year, prior to her appointment to fill a vacancy seat in the Colorado State House. Reyher insists she is not a racist.

Reyher wrote on Facebook this week that “the protestors have been lied to for so long and can’t even see reason. I will never give up my guns and know many people who feel the same way. I am a Patron Life Member of the National Rifle Association and am a supporter. It makes me very sad that so many Americans are falling for the notion that disarmed is safer.”

On Facebook, Reyher explained that a “mom” contacted Reyher to express the view that it’s “‘cheaper’ to take all of the guns than it would be to pay for school safety measures.”

“To my way of thinking,” wrote Reyher, “that is an odd way to say you want your children safe. But this is just an example of how warped the thinking of these people are who think disarmament is the way to go.”