Colorado State Sen. Beth Martinez Humenik continues to take heat from the Colorado Campaign for Life (CCL), which has been seeking a “strong God-fearing, pro-lifer” to challenge the Thornton Republican in the GOP primary election this year.

In an email to supporters last year, CCL criticized Humenik for her votes on an abortion bill, claiming that she betrayed her conservative base. 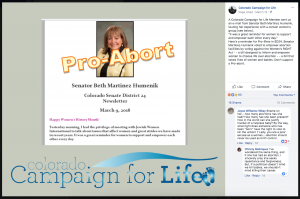 This week, prior to the beginning of the GOP’s county assemblies, where a challenger to Humenik would emerge, CCL posted an image on its Facebook page, labeling Humenik “pro-abort.” CCL commented:

A Colorado Campaign for Life Member sent us an e-mail from Senator Beth Martinez Humenik, touting her experience with a certain women’s group [Jewish Women International].
“It was a great reminder for women to support and empower each other every day.”
Here’s a reminder for Pro-lifers in SD24, Senator Martinez-Humenik voted to empower abortion facilities…

In the comment section, CCL Director Christy Rodriquez apparently wrote, “I’ve wondered the same thing, and if she has had an abortion, I sincerely pray she seeks repentance and forgiveness. But, if a politician doesn’t mind we kill babies, we shouldn’t mind killing their career.”

A call to CCL to confirm the Facebook posts and to determine whether CCL had identified someone to primary Humenik, who represents a key swing district, was not immediately returned.