State Rep. Dave Williams, a Republican from Colorado Springs, is keeping tabs on which GOP candidates for Colorado governor would support his harsh legislative proposal on immigration.

Williams made national news earlier this year for promoting a bill that would have allowed victims of crimes committed by undocumented immigrants to sue politicians in so-called sanctuary cities, which have limits on collaboration between federal immigration officers and city officials.

Denver implemented a set of sanctuary policies last August, including rules that city employees, like local law enforcement, cannot collect or share information on a person’s immigration status, detain people on behalf of Immigration and Customs Enforcement (ICE), or allow ICE into jails without a warrant.

These guidelines, which prohibit actions that are voluntary, not mandated by federal law, are meant to facilitate cooperation between undocumented immigrants in the community and police officers, which immigrant advocates and many in the law enforcement community say is crucial for public safety.

Reports from last March, for example, revealed that several victims of domestic violence in the Denver area dropped their cases for fear that contact with city officials would expose them to ICE, allowing their aggressors to walk free and endanger the community at large.

Boulder and Aurora are also considered to be sanctuary cities, making them potential targets of Williams’ proposed policy. 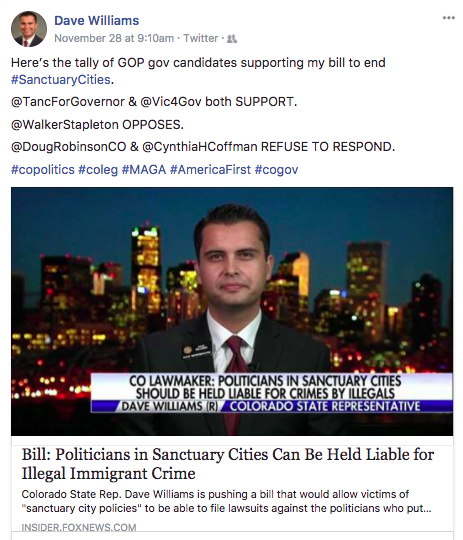 So far, two Republican gubernatorial candidates have expressed their support for the policy according to Williams, including businessman Victor Mitchell and longtime immigration hardliner Tom Tancredo.

Williams hasn’t received responses from Attorney General Cynthia Coffman and businessman Doug Robinson, who are both in the GOP primary race for governor. Williams has expressed his opinion on Twitter that “not responding is an answer”. 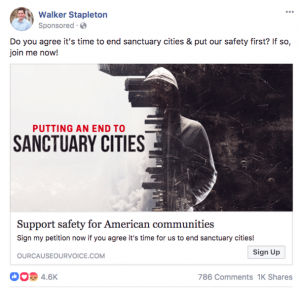 State Treasurer Walker Stapleton is the only GOP candidate thus far who has openly opposed the policy.

But while Stapleton allegedly opposes Williams’ sanctuary city crackdown, he does appear to support “putting an end to sanctuary cities”, as he puts it in a Facebook ad.

Stapleton also said at a GOP breakfast in October that he believes it’s “a governor’s responsibility to pursue every legal avenue possible” to stop sanctuary cities, making it even less clear why he would not support Williams’ bill.

GOP candidate for state house Grady Nouis asked Williams in a Facebook comment if he’d ask the other state house candidates if they agree with his immigration policy, to which Williams replied that he’d “think about it.”

A call to Williams’ office seeking to know if he’ll carry through with the idea, and if he’ll once again push his sanctuary city bill during the 2018 legislative session, was not returned.