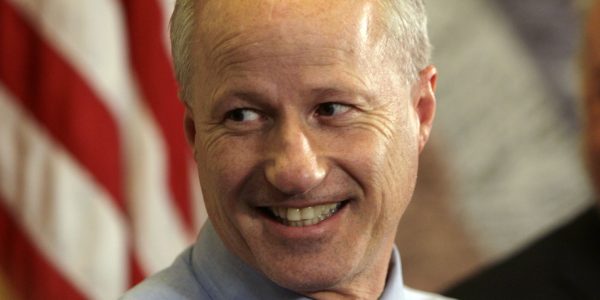 Following a rally Tuesday at the office of U.S Rep. Mike Coffman (R-CO) in Aurora to oppose the House GOP tax plan, multiple people attempting to meet with Coffman’s staff and deliver tax-related notes written by rally-goers were turned away and asked to leave the notes outside the door.

Coffman’s staff member never came to the door to speak face to face with the group but rather communicated via intercom, telling them to “leave [the notes] right [outside the door] and one of our staff members will come grab them when he or she goes to the bathroom”.

Coffman’s apparent office policy is to not allow constituents in the door unless they have an appointment, which must be scheduled prior to arrival. His Aurora office is the only office in the state.

Demonstrators left what appears to be dozens of notes, written on Monopoly money in accordance with the rally’s Monopoly theme. 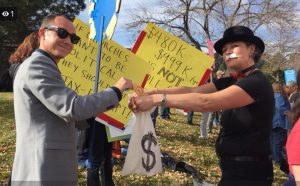 Drawing inspiration from other demonstrations, the rally also featured an appearance from “Monopoly Man”, in addition to the Koch brothers and a giant payout check to Coffman, which organizers say is meant “to demonstrate how far away the GOP is in terms of prioritizing what matters to Americans – healthcare investment, student loan deductions, and other vital middle class protections.”

Republicans are branding the tax bill as a win for middle class families, but an analysis from the nonpartisan Tax Policy Center shows it benefits the wealthiest Americans and features dramatic cuts for corporations while offering little relief to low and middle income people and eliminating tax deductions for student loans. House Republicans also added in controversial provisions that have little to do with tax reform, like personhood language and a repeal of the Affordable Care Act’s individual mandate.

The bill also adds to the deficit, a point which Michael Himawan, one of the Aurora residents who tried to enter Coffman’s office, was hoping to discuss with Coffman’s staff. In a quote provided in a press release from rally organizers, Himawan expressed his frustration:

“As someone who lives, works, and votes in Rep. Coffman’s district, I was disappointed in the way the office staff dismissed our attempt to discuss the GOP tax plan. I was sincerely curious about whether he was aware of what happened when Kansas tried this sort of policy at the state level. I’m also bewildered as to how Coffman, who ran as a deficit hawk, could equivocate over something that would add  $1.5 trillion to the national debt.”

A vote on the tax bill, called the Tax Cuts and Jobs Act, is scheduled for Thursday.

Photos and video were provided by Indivisible Front Range Resistance.