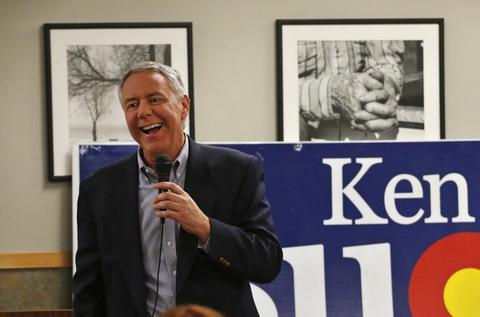 U.S. Rep. Ken Buck (R-CO) told KVOR radio in Colorado Springs over the weekend that he has a “great time” at town hall meetings, and he doesn’t believe the “rowdy people” who attend his town halls are “paid protesters.”

Buck’s comments contrast with U.S. Sen. Cory Gardner, also a Republican from Colorado, who’s accused callers to his office and protesters at recent events of being paid, saying earlier this year that he worries about “paid protesters from out of state who are crowding out those Colorado voices.”

Gardner has also refused multiple requests this year to meet with constituents in person.

“I saw you doing some town halls, and so forth, and I’ve been hearing, you know, over these past couple of months, a lot of paid protesters are showing up at these town halls.  Are you getting any of that at yours?” asked KVOR 760-AM’s Tron Simpson of Buck Saturday.

“I’m not.” responded Buck. “I’m getting plenty of rowdy people who are very liberal, who disagree with my worldview, and would love a more liberal representative. And they express themselves.  You know, it’s loud. But I have a great time with it.  I have got to tell you, I don’t care who it is, what your political views are.  If you care enough about America to show up to a town hall meeting and talk politics, I respect you!”

Buck, a member of the ultra-conservative House Freedom Caucus, made some schedule changes April 14 that enabled him to appear at a town hall meeting organized by constituents who’d planned to hold the event with or without the Buck in attendance.

Gardner, in contrast, refused to attend a similar event in Denver last month, forcing 1,500 constituents in a packed school gymnasium to pose questions to a cardboard cutout of the first-term senator.

Before being elected, Gardner specifically promised to be held accountable via “town meetings,” but this year he’s held none, deciding instead to take questions from conservatives on 15 conservative talk radio shows and from constituents on two telephone conference calls. He’s also spoken at private events and taken questions from reporters.

Gardner is the only member of Colorado’s Congressional delegation who has yet to hold a town hall meeting this year.