The debate about false information on social media frequently bumps up against one question in particular: How are we defining “fake news”? And should that definition include “news” that can’t be neatly classified as either fact or fiction, but instead falls somewhere in the middle?

This recent post from Casper Stockham, a former GOP candidate with a history of indifference toward vetting his Facebook page for accuracy, illustrates this aspect of the fake news quandary: 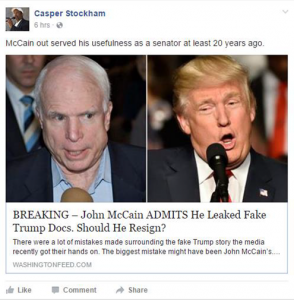 The headline reads “BREAKING – John McCain ADMITS He Leaked Fake Trump Docs. Should He Resign?”, referring to the now infamous dossier with unverified claims of Trump’s professional and personal activity in Russia.

As the actual content of the article indicates, however, this headline is a considerable stretch. Aside from the fact that the documents haven’t been proven to be fake, it plays up McCain’s involvement in the scandal. The article offers the statement McCain released as evidence, which reads:

“Late last year, I received sensitive information that has since been made public. Upon examination of the contents, and unable to make a judgement about their accuracy, I delivered the information to the Director of the FBI. That has been the extent of my contact with the FBI or any other government agency regarding this issue.”

Based on this statement, it’s an exaggeration to say McCain “leaked” the documents. That phrasing implies that he made the information public, when really, he simply turned the documents over to the FBI for investigation (because, you know, that’s what the FBI does). The information is public now, but that’s due to Buzzfeed’s decision to publish the dossier.

Can this article be definitively referred to as fake news? Probably not, although that depends on your definition. But it certainly does stretch the truth, seemingly intentionally, to fit a narrative that is unflattering of McCain in the eyes of Trump supporters.

It seems like a safe assumption that many, if not a majority of people, may not actually read the articles they share or see on Facebook. If that is indeed the case, then headlines like these are particularly insidious.