With rumors that Derrick Wilburn may take a run at State Chair of the Colorado GOP, I thought it might be useful to take a look at the type of things he believes. In this instance, he posted his thoughts about liberalism and parlayed them into a chance to launch a sideways attack on one of the most vulnerable groups of people in our society—transgender citizens. 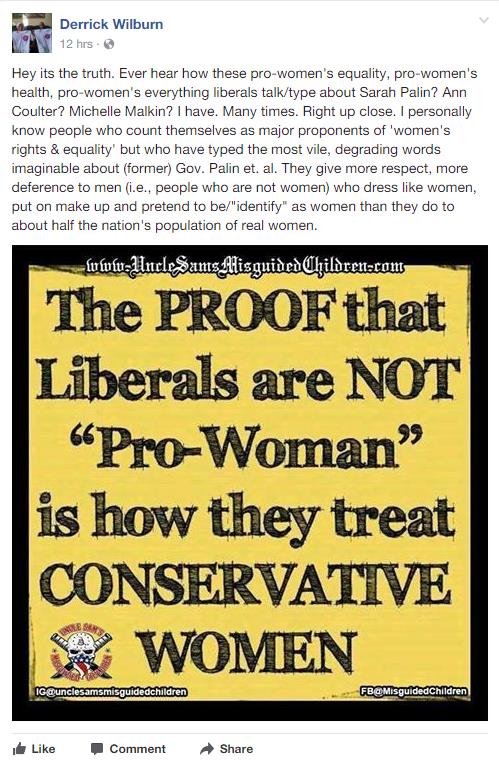 The premise of the meme, that liberals mistreat conservative women, is obviously suspect, which is why Mr. Wilburn provides exactly zero examples of the “attacks” he says he witnesses all the time.

I am sure there are random liberals who say things about these women that aren’t nice. I myself have attacked Malkin’s views on internment camps (she’s for them) and Palin’s readiness to serve as president, for instance, but criticism isn’t a “vile or degrading” attack. In the case of Ann Coulter, I can’t think of a person who launches more personal, vile, and degrading attacks than her.

I suppose when your party elects as president a man who admitted and bragged about sexually assaulting women and who says vile and degrading things about them all the time—including calling his opponent a “nasty woman” in a presidential debate and agreeing with a radio host that his own daughter is a “great piece of ass”—you reflexively want to claim the other side does the same thing.

But what bothers me most about Wilburn’s post is the “vile and degrading” attack on transgender Americans that he throws in at the end of it. You can tell a lot about a person by where he throws his punches, and Mr. Wilburn likes to punch down on those who are already at risk and vulnerable. He has no qualms about throwing “vile and degrading” punches at people who regularly endure cheap-shots from bullies like him.

Derrick Wilburn is not fit to serve his current role as Vice-Chair of the Colorado GOP, much less as State Chair of the GOP. He should apologize for his attack on transgender citizens and either put up some evidence or shut up regarding his claim that “liberals” mistreat conservative women.