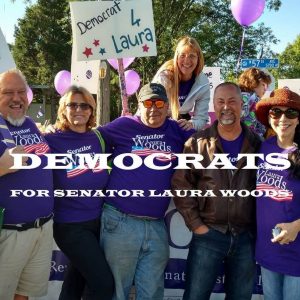 Arvada State Sen. Laura Woods is known to be on the far-right fringe of Colorado’s Republican Party, aligning herself, as documented by the Denver Post, with the most conservative lawmakers in the state.

She’s wants to ban abortion, even for rape. She’s opposed to criminal background checks before gun purchases, and she wants to slash health care funding for the poor, among other positions rub most Democrats the wrong way.

What’s more, she likes Trump so much she calls him the “people’s candidate.”

So it was surprising to hear Woods on the radio claiming “a lot” of Democrats will be voting for her.

Woods: “I’ve met a lot of Democrats who have said they‘re going to vote not only for Trump but for me as well. So, there’s even a Facebook page, Democrats for Senator Laura Woods. Wow.”

Wow, it’s true, there is such a group on Facebook, but the page does not support Woods’ statement that Democrats are going to vote for her. Not even close.

For starters, Clifford Battista, one of just eight people pictured as Democrats on the page, was a registered Republican until I asked him about his voter registration earlier this week, at which time he switched and became a Democrat, saying his Republican registration was a mistake. In any case, he doesn’t live in Woods’ district.

Neither does Robin Austin, another man pictured as a Democrat on the Facebook page. He’s actually a Democrat, but registered in Boone, North Carolina, where he owns a home, though he visits here frequently and it’s “conceivable” he will move to Colorado, he told me.

Three women who appear in photos carrying “Democrats 4 Laura” signs on the Facebook page also do not live in Woods’ district, where she’s battling Democrat Rachel Zenzinger in a race that will likely determine which party controls Colorado’s senate.

They are Luanne Fleming and her daughter, Leah Fleming, both Democrats, who reside in Aurora, and Athena Roe, an El Paso County Democrat.

I was unable to identify one man and two women among the eight people presented as Democrats on the Facebook page.

Asked if any of “Democrats for Senator Laura Woods” pictured on the Facebook page can actually vote for Woods, Luanne Fleming, who told me she posts on the page, said she doesn’t think any of them live in Woods’ district.

“There is one in her district, and he’s not on there, and he supports her,” said Fleming. “And his name is Marty. I haven’t gone over to get his picture or to put anything up there about him. I’m just so busy. So there is one who is from the district.”

“They are mostly the probate families that are helping her,” said Fleming, referring F.A.C.E.U.S., a group that, with Woods’ help in the legislature, has been pushing for reforms in the probate court system. “She’s one of the very few people who came to our aid.”

Austin, the North Carolina voter, was drawn to “Democrats for Senator Laura Woods” for the same probate-related reason, because she’s fighting the “corrupt judiciary,” he told me.

Asked how he felt about Woods relying on a Democrat from North Carolina to show she has Democrats voting for her, Austin said, “I don’t think it’s her choice who she is relying on. I think it’s my choice. Who I support.  And I support her.”

Battista, who was mistakenly registered as a Republican until I called him this week, was also drawn to Woods for her position on the court system, which has overriding importance to him. He told me he’d noticed some problems with his primary ballots, but he’s been too busy to check on his voter registration in recent years. He meant to separate from the Republican Party in about 2011, he said. He’s an active union member, and he worked for Athena Roe, who was a Democratic candidate in El Paso County, he said.

It’s unclear whether Woods, who does not return my calls, has other evidence to back up her claim of Democratic support in her Arvada district.

But Facebook posts touting Democratic support should be viewed with a skeptical eye by reporters and others.

“I want to thank all of my supporters from the Democrat party who showed up to walk with us in the parade today,” wrote Woods in a Facebook post Sept. 12, referring to members of “Democrats for Senator Laura Woods” who posted photos of the parade on their Facebook page.

“You are very welcome,” commented “Democrats for Senator Laura Woods, District 19” on Facebook.

But it appears that “Democrats for Senator Laura Woods” won’t be thanking the Arvada lawmaker with their votes, despite what you might think from looking at their Facebook page and listening to Woods on the radio.

The above photo is a group pictured on the Democrats for Semator Laura Woods Facebook page. They are, from left to right, 1) Robin Austin, the Democrat from North Carolina, 2) Luanne Fleming, a Democrat from Aurora, 3) unknown man, 4) in back, unknown woman, 5) Charles Battista of Denver 6) Athena Roe, a Democrat from El Paso County.

On KNUS 710-AM Sept. 17, Woods discusses her alleged voters from the Democratic Party, as evidenced by the Facebook page “Democrats for Senator Laura Woods.”

Below, Leah Fleming, a Democrat from Aurora, is pictured with Laura Woods on the “Democrats for Senator Laura Woods” Facebook page. 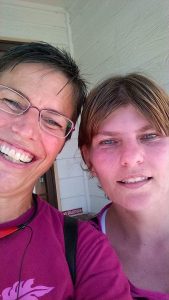 Correction: This blog post initially stated that Woods represents a district in northwest Denver. It’s not in Denver.
Original Publication