State Sen. Laura Woods (R-Arvada) first tiptoed onto the Trump train in January, when she called Trump one of her two favorite presidential candidates.

Then Woods jumped fully on board in August, when she called Trump the “people’s candidate” and said “running away” from him wasn’t even a consideration.

In case you’re wondering whether Trump’s shocker room talk, from the Access Hollywood video, will push Woods out of the Trump train, you will want to know that Woods is apparently staying on board.

Over the weekend, Woods, whose race against Democrat Rachel Zenzinger will likely determine control of the state senate and with it state government, liked a Facebook post of Sen. Ray Scott (R-Grand Junction).

I have no intention of dropping my support for Trump. Here’s why.

I’m trying real hard to remember a perfect President or for that matter anyone that has run for political office.

As Alexander Haig once said, no one has a monopoly on virtue. I don’t agree with all of Trump’s positions or comments by any means. I support his economic plan, ending the war on fossil fuels, his stance on defense, immigration, the 2nd amendment and trade issues….

Scott’s Facebook post, which I obtained from a source, has “likes” from about 50 people, including Woods and Peggy Littleton, the failed GOP U.S. Senate primary candidate.

So it looks like Woods is still comfy in her seat on the Trump train. But will voters be comfortable with her in it?

In a news post for Rewire.news today, I discuss one advertisement linking Woods to Trump, and offer an interview with one expert who thinks the tactic could work, helping to push Woods out of office in November. 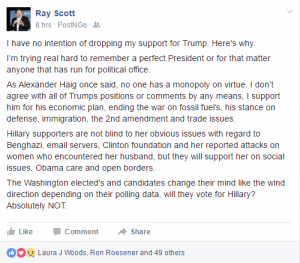