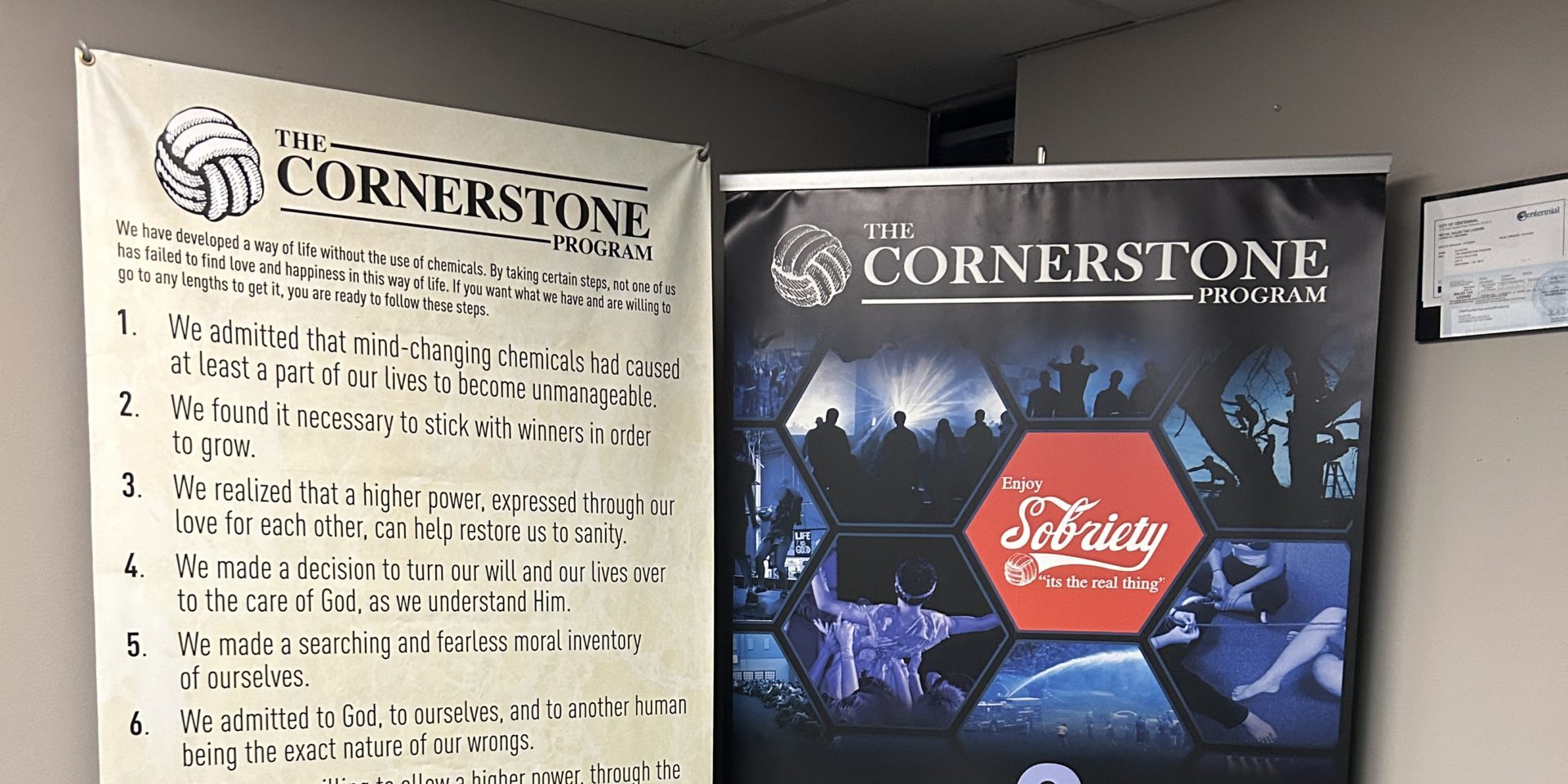 “It is very unfair to the people who are providing these services today to associate them too closely with [Bob] Meehan, [founder of Enthusiastic Sobriety], or any failures that people want to dredge up because they simply don’t want to hear that this could be something that’s effective and good,” says Christine Tatum, a freelance journalist and co-author of Clearing the Haze: Helping Families Face Teen Addiction, written with her husband, Dr. Christian Thurstone.

Meehan stepped away from Enthusiastic Sobriety in 2005, and died in 2021, but his book, Beyond the Yellow Brick Road, is still a staple of the program. His sayings, like “No victims, only volunteers,” and “PISS [Properly interpret social situations]” are still dutifully recited. The training center for Enthusiastic Sobriety counselors, drawn from their pool of clients, is the Meehan Training Institute.

“You know what he did?” asked Tatum of Meehan’s legacy. “He dropped a lot of F-bombs, kids thought that was hilarious. They loved it. Right. Meehan was also someone who was very old school, very ‘My way or the highway’ in some places, in some ways, probably worded some things that I wouldn’t have worded it that way. You wouldn’t have worded it that way, but I think that you have to look on balance at the effectiveness of what he did. And I would say that on balance, his approach was very effective.”

Tatum’s claims about effectiveness are questionable, given that Frank Szachta, the owner of Cornerstone, an intensive outpatient program that uses the Enthusiastic Sobriety approach, has admitted that his program does not maintain statistics regarding efficacy. Attempts at researching the efficacy of 12-step programs are difficult, for myriad reasons, but Lance Dodes, the author of The Sober Truth: Debunking the Bad Science Behind 12-Step Programs and the Rehab Industry, pegs the actual success rate at between five and eight percent.

“I don’t have a specific number for you,” says Jacob Zimmer, who was involved with Enthusiastic Sobriety from 2016 to 2021, as a client at age 16 and then as a counselor. “I don’t think it’s something that gets tracked super heavily, but after being immersed in Cornerstone, FullCircle [a support group that uses Enthusiastic Sobriety], spent some time working with people at Sandstone, spent some time working with people at Mile High Recovery, a very small sober living and outpatient program, and in some other programs in the Denver area, they’re seeing something like five, four percent success rates. Although I don’t know the exact number that Cornerstone and FullCircle are getting, I would imagine it’s far greater than four or five percent.”

While traditional 12-step programs, like Alcoholics Anonymous, might not have high success rates for a notoriously difficult condition — addiction — they also do not partner with for-profit treatment centers or outpatient programs in the way that FullCircle does with Cornerstone, in Colorado; Crossroads, in Missouri; Insight, in Georgia; or Step Two in Arizona.

“Outpatient is one fee,” says Szachta. “The minute you’re not bleeding, you’re out. … The average stay is 12 to 16 weeks, but the longer you’re in doesn’t mean we get more money.”

Though FullCircle and Cornerstone charge for weekend social functions, Szachta insists, “I’m not getting rich here.”

Tatum warns against relying too heavily on the testimony of former clients or members of the Enthusiastic Sobriety Abuse Alliance (ESAA), the nonprofit working to raise awareness about what they say are the program’s questionable practices and a culture that tolerates racism and homophobia — all claims that Szachta and Father John Bonavitacola, the founder of FullCircle, firmly deny.

“I’ve carefully researched dozens of programs, and what I can tell you is that I haven’t encountered a perfect one yet,” says Tatum. “I haven’t encountered a program that works for everybody. I have encountered a lot of people who have substance addiction, who are also not truthful about their actual experiences. I mean, like, again, I’ve encountered plenty of people who have said plenty of things and made plenty of claims about how this didn’t work for me. I have looked into, well, why didn’t this work for me? I keep coming back to, well, it wasn’t a good fit for you, or you just really don’t want to be sober.”

Zimmer says his experiences with the program are absolutely not what have been expressed by former clients or ESAA members. “My experience has not been feeling resentful at the program about the way I was treated or about the way other people were treated,” he says. “I’ve just never seen anyone treated unfairly. I’ve seen people get held accountable. I’ve seen some tough love. I’ve never seen anyone getting treated unfairly.”

There is a kind of cultural divide between recovery communities and broader society. “I want to try to give an example, and I think you have to use [the example of] a closed system church,” explains Dave Larsen, who founded Cornerstone, but left Enthusiastic Sobriety in 2003. “When you think about 12-step recovery, there’s 12-step-based and then non-12-step-based. Most of the really strong 12-steppers just don’t even think that non-12-step stuff is really even okay. Amongst these 12-steppers, you do have a whole spectrum of, kind of, militancy to really liberal, chill people, not much narcissism, but they just did the 12-steps and it worked for them, and they don’t do a lot of kind of religious indoctrination, although the 12 step program has that basis. It comes from a Christian movement called the Oxford Group, before AA started.”

Enthusiastic Sobriety is arguably on the more militant end of the 12-step spectrum. “Enthusiastic Sobriety just becomes a place where groups of relatively volatile teenagers need real help and have found little success in any other program,” says Zimmer. “Then they get immersed in a group of peers who are positive, who want the best for them, want them to stay sober and lead successful lives, who over time become relatively like-minded.”

Zimmer says claims that the group is a cult, which have dogged 12-step programs for decades, are unfounded. “If you spend that much time around someone that you enjoy and who is pushing to grow, your thought patterns begin to change, which is the entire point of counseling,” he says. “The point of counseling is to change the pattern in someone’s head to start doing better for themselves. I reject any allegation of the word ‘cult’ or ‘unhealthy’ or whatever it may be.”

An old 12-step adage, shared by Tennessee-based recovery center Discovery Place, is, “Yeah, they brainwash you, but my brain needed to be washed.”

Allegations of coercive, cult-like influence aside, the teens in Enthusiastic Sobriety programs have shown a national pattern of risky behavior, or “fun felonies,” that are explicitly mentioned in Meehan’s book. Szachta and Bonavitacola both note that these incidents happen outside program hours and off the program’s property, and are not their fault.

“Do things happen that the program does not condone within the program?” asks Zimmer. “Absolutely, all the time. But it can’t be about the program. It needs to be about individual accountability.”

While many people — ESAA’s Liz Nickerson included — say Enthusiastic Sobriety helped them get sober, some look back and question their time in the group. Though Zimmer is adamantly supportive of the positive work he has experienced during his time with Enthusiastic Sobriety, he doesn’t consider himself an addict or an alcoholic — a claim you don’t find in most 12-step circles.

“I don’t even consider myself an alcoholic,” he says. “I think I was a troubled teen. I think I had a really hard time making friends. I think I was really insecure. I think alcohol and drugs were just outlets for that. At this point in my life. I don’t think I’m an alcoholic, but with this program, I no longer needed to live in fear and through the 12-steps and through just really, really, really basic counseling by people who are qualified to do so, I learned some self-respect and confidence, and I was no longer insecure and I was able to now start to make decisions for myself.”

Other former members — particularly women, minorities, and LGBTQ people — have a different perspective on the group’s impact. “I don’t know how to connect to people anymore,” says Iris, who declined to use her real name. “That’s the major thing. I didn’t know how to actually get sober, they just distracted me from all my problems. I didn’t get to work through the trauma, which was like the main core of my using. Going back to school, getting my own place, going back to a job that’s not being controlled by them, it’s been a major change for me, and I’m not good with change. I depended on the group, I lived with the girls, I quit my job, and left school, did all the things. Now that I’m reentering normal society, it’s like culture shock. Nobody talks like they do. They’re not like, ‘Oh, give it to God.’ I’m in therapy now and my therapist isn’t like, ‘Go pray about it. You’re spiritually sick.’ She’s actually doing things with me to help me.”

Isabel Lanzetta contributed to this reporting.