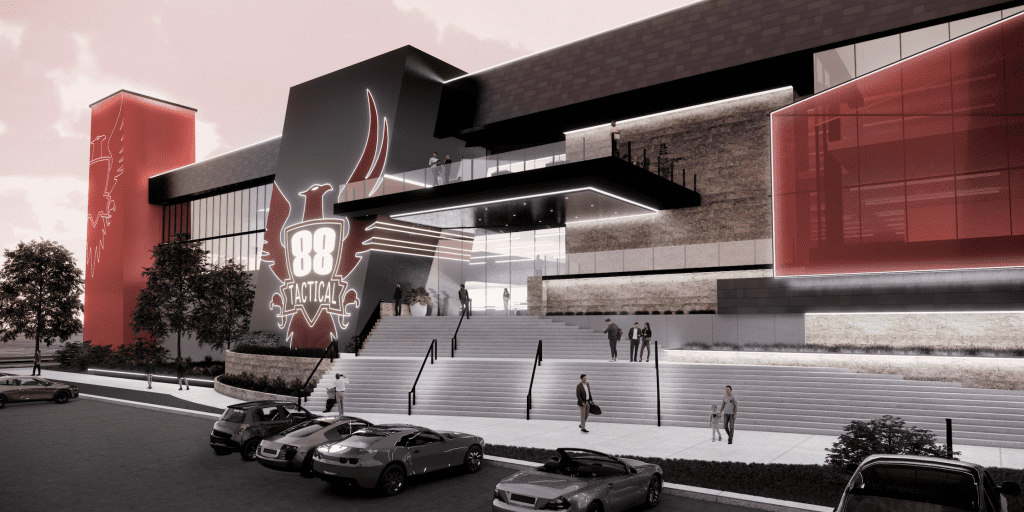 88 Tactical, the self-proclaimed “Guntry” Club whose name maintains links to white supremacy and Neo-Nazi numerology, is planning to expand into the Denver metro area.

The company announced plans to expand to 16 cities around the country in the coming year.

Future locations are expected to be over 100,000 square feet and will include 100 indoor shooting ranges, a 24/7 fitness center, drop-in childcare, a bar and restaurant, virtual reality simulators, classrooms, training areas, an event space, and an outdoor entertainment area.

According to the company, 88 Tactical’s services include “training courses for civilians as well as law enforcement and military personnel” while creating “a family-centric community that teaches lifesaving skills, cultivates confidence, and provides a unique entertainment experience.”

88 Tactical has faced criticism as early as 2012 for its use of numeric hate symbols and its affiliations to white supremacy.

According to the Anti-Defamation League (ADL), the number 88 is used as a white supremacist numerical code for “Heil Hitler.”

Publicly, 88 Tactical Founder and CEO Shea Degan has officially denounced white supremacy and clarified the origin of the number 88. According to Degan, a police officer who served for 20 years in the state of Nebraska, “signal 88” is police code that stands for “Situation is Safe and Secure.”

However, after over a decade of public concern surrounding the name, many critics have argued that the company’s reluctance to do away with the concerning number is evidence of its endorsement of white supremacy.

In a blog post titled “The Truth Behind Our Name,” 88 Tactical responded to individuals concerned about the company’s connection to white supremacist numerology, accusing them of “spread[ing] blatant lies and mak[ing] baseless accusations that hurt good people.”

As writer Amanda Gailey pointed out in her article “Can We Please Stop Pretending about the Nazi Fortress Outside Omaha Now,” 88 Tactical’s name is only the beginning of the company’s concerning affiliations.

Gailey observed that the logo for 88 Tactical, which appears to be a red phoenix or eagle with its wings spread, looks eerily similar to a Nazi War Eagle.

According to the ADL, this “symbol originally featured an eagle clutching a swastika, but many variations replace the swastika with some other hate symbol, such as SS bolts or a Celtic Cross.”

Although their logo might not feature these hate symbols, 88 Tactical’s Instagram did feature Black Rifle Coffee Company’s Silencer Smooth Blend, which displays the letters “SS” in enormous block print along the front of the bag. The Schutzstaffel, or SS, were a Nazi paramilitary unit that enforced Nazi racial laws. The Waffen-SS were combat units known for warcrimes against Polish civilians, and the SS-Totenkopfverbände were responsible for administering Nazi concentration camps.

As Gailey further investigated, Degan named his Doberman Pinscher “Panzer,” which is not only the name of a tank produced by Nazi Germany but which also refers to the “Panzer division,” a German military unit used at the onset of World War II.

88 Tactical elicited controversy again when it commissioned an artist to install a topographical map in their Omaha facility that incorrectly labeled a peak with the number “1488,” despite inconsistency with the map’s scale, which would have placed the peak at around 1500 or 1520.

According to the ADL, the number 14 “is used by white supremacists as a shorthand reference to the so-called ‘14 Words,’ which is the most popular white supremacist slogan in the world:  “We must secure the existence of our people and a future for white children,” and is often used in conjunction with the numeric symbol 88.

88 Tactical removed the map but went on to explain that this design element was meant to compliment the facility’s décor, which features military memorabilia, relics, and artifacts from World War II.

The company then accused those concerned by the use of the number of taking part in a “hateful campaign” and denounced white supremacy on Twitter, pointing out that the map used in their facility was adapted from a popular Shutterstock image.

Three years before, 88 Tactical caused a public outcry in 2017 when they invited John Guandolo, the head of the anti-Muslim group Understanding the Threat (UTT) and a disgraced ex-CIA agent, to present on “the Muslim Brotherhood’s ‘secret strategies for the USA.’”

According to the Southern Poverty Law Center (SPLC), “Guandolo promotes himself as a former FBI agent and an expert on terrorism who can help law enforcement and others uncover the “secret” terrorist cells in their area, but in reality, Guandolo’s trainings are little more than anti-Muslim witch-hunts. What he doesn’t tell you is that he left the Bureau in disgrace for a number of ethical breaches and bizarre conduct which included admitting to having affairs with female FBI agents and a confidential source he was assigned to protect.”

Guandolo lost his endorsement from the National Sheriffs Association (NSA) in 2017 when he was arrested for physically assaulting Hennepin County Sheriff Richard Stanek.

88 Tactical did not respond to a request for comment on their expansion or whether they would consider rebranding anytime soon.

They have, however, responded to questions regarding its use of Neo-Nazi slogans on their blog, with top headlines including “Supporters Respond to Vicious Defamatory Attacks, Topographic Map Fuels Hateful Campaign, Sometimes a Rappeling Tower is Just a Rappelling Tower, and The Truth Behind our Name.”

In posts, they have called individuals concerned by their ties to white supremacy and Islamophobia emotionally toxic individuals who harass and victimize their organization.

In a Facebook post responding to the controversy surrounding their chosen name, 88 Tactical liked the comment, “It’s sad when people jump to conclusions without looking into something first. At least when the sh*t hits the fan we’ll be able to thin the herd…only the strong will survive.”

Such language aligns with the Darwinian evolution theory “survival of the fittest” that led to the advent of Social Darwinism — views that often support eugenics, racism, imperialism, and fascism.

According to Hate Free Colorado, 3 in 10 adults in Colorado have experienced a hate crime in the past 5 years.

Local ordinances restricting the possession and sale of firearms have been met with lawsuits from the conservative group Rocky Mountain Gun Owners and many Republican candidates across the state oppose gun safety measures.

88 Tactical did not respond to how they would ensure the safety of community members and residents of the Denver Metro area, nor whether they would dedicate themselves to preventing gun violence.